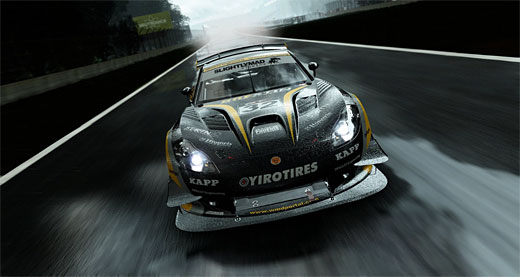 WTF Getting an off-track penalty for taking a mandatory pit stop.

Where can the racing sim go that it hasn't already gone? What new ideas can be presented in a genre bound by realism? We've perfected the mechanics, and the technical leaps are getting smaller and smaller by the year. Next to the overwhelming completeness of Gran Turismo and the blistering style of Forza Motorsport, what good is yet another contender?

These are questions that the adequate but uncharismatic Project CARS never quite answers. That developer Slightly Mad Studios wants their crowdfunded game to complete with AAA franchises is admirable, but with very few unique angles of its own, the remarkable circumstances behind Project CARS's inception are the most interesting thing about it. It's simply a racing sim with more technical problems and a less thriving online community than we're accustomed to.

Project CARS's claim to fame is the somewhat realistic manner in which its campaign is structured. There's very little focus on ownership here; some players may be unaware of the fact that they've got a garage at all. Instead, players accept contracts and drive whatever vehicles their sponsors supply them with for an entire season. No taste-testing here—pick a car and then spend the next couple of months mastering it or forfeit the championship altogether.

Events themselves tend to be long-winded affairs that center exclusively on a single track at a time. There are multiple races at each stop, as well as qualifying hot laps used to determine the starting placement for said races. It's all very realistic, and it adheres to the game's theme of mastering one thing at a time, but it's also rather plodding, and it meant that I was often tired of tracks long before I was finished with them.

Most frustratingly of all, there's very little sense of progress in the way the campaign unfolds. Since there's no money or experience, there's no real reward for completing events, and since long stretches of the game are played behind the wheel of the same car, Project CARS is a racing sim that's slow with no payoff. There's no real difficulty curve, either, since supercars and Formula events are available pretty much right out of the gate.

I never reached a definitive "ending" in Project CARS, and I have no idea if there even is one, or if players are simply expected to cycle through seasons until they lose interest. There's that little momentum; that little sense of purpose.

This isn't to say that Project CARS is in any way bad. The controls are tight as a gasket, and the whole "sim" aspect of this racing sim will delight genre fanatics when they see the absurd degree to which tuning setups can be customized—tire pressure, downforce, camber angle, whatever. The game's presentation is bland, but Project CARS is functionally sound and aided by some dynamic weather and daytime lighting effects that can dramatically change the outcome of a race.

Having said that, the game is somewhat unpolished technically. Animation and clipping issues abound, and the visual appeal is all over the place—in some cases, like a lovely track set against the Dubai skyline or a magnificent recreation of California State Route 1, the visual majesty of certain locations elevates the experience. On other tracks, especially those high in foliage, the graphical shortcuts are noticeable, and one can expect some heavy framerate dips when a large number of cars are onscreen at once.

Overall, Project CARS is… fine. I suspect it'd be superb to anyone who's never delved into a serious racing sim before, but it brings too little new to the table for someone like me who's already gotten a bit bored with the big-name offerings in this genre. I love to see indies challenge AAA publishers like this, but it's a lost cause if I'd rather stick with the AAA games anyway. Rating: 6.5 out of 10


Disclosures: This game was obtained via publisher and reviewed on the PC. Approximately 15 hours of play were devoted to the single-player mode, and the game was not completed (if it even can be). One hour was spent in multiplayer modes.

Parents: The ESRB has given this game no descriptors. It's a straightforward driving sim with absolutely no violence, language or objectionable content whatsoever.

Deaf & Hard of Hearing: What little dialog the game has is subtitled, and it all just relays information that's clearly displayed on the HUD anyway. No issues here.

I find Project Cars a bit underwhelming. Considering all the hype in sim racing circles before the release, the final product is indeed a bit bland. If you can call it a final product: with my AMD graphics card I have plenty of framerate issues and the game crashed to desktop multiple times when switching between menus. The campaign wasn´t even the biggest disappointment for me, but the AI. On one hand the AI drives awfully slow through certain corners, but in others it brakes way too late, and above 80% strength has little awareness where the player is. Negative… Read more »