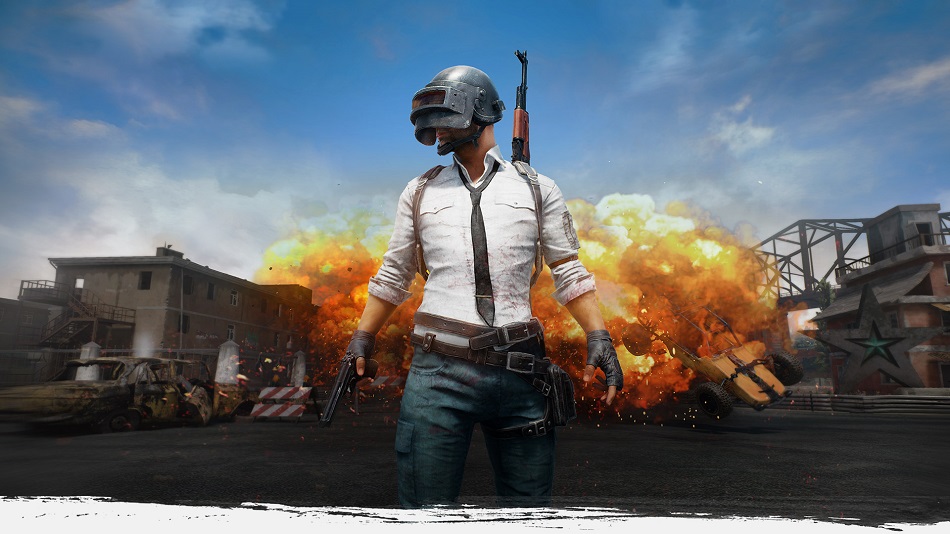 LOW Not finding a scope.

WTF Couldn’t they make the S12Ks pink or something so I wouldn’t keep thinking they’re rifles?

PlayerUnknown’s Battlegrounds had already hit 30 million sales by the time it saw an official Steam release last month, so it’s not as if the game needs validation from highfalutin’ critics at this point. I’m also unconvinced that any single PUBG review would be useful for more than a few months, given that its exit from Early Access was clearly just a formality so bloggers would feel less conflicted about including it on their year-end lists. PUBG is a 2017 release in name only, because this thing is, clearly, still unfinished.

However, regardless of how many issues it has at the moment, I can already recommend it on the basis that anyone who’s seen movies like Battle Royale and The Hunger Games has probably imagined that a similar premise would make for a pretty killer videogame. The thirst was there, and Brendan Greene (who previously toyed with this concept in an ARMA 2 mod) was the first to quench it.

The setup is that players are airdropped onto a 64-square-kilometer map, wherein they must gather supplies and murder one another until only a single person is left standing. Matches can support up to a hundred players, and there are no “lives” – when someone’s killed, they’re out of the game.

Players begin matches empty-handed, and must rely on randomized item drops to prepare for battle. A gun with decent range is a must, and a scope is gravy. Since equipment spawns almost exclusively in buildings, densely-packed urban areas yield the highest success rates, but also attract more commotion. Roughly a third of the players are eliminated in a match’s opening moments as competitors scramble and claw at each other for the best gear.

The appeal of such a multiplayer mode is easy to understand, since PUBG becomes increasingly nerve-wracking as the ultimate prize of placing first among a hundred people nears. The two times I’ve actually won PUBG matches rank among my all-time most adrenaline-soaked gaming moments. 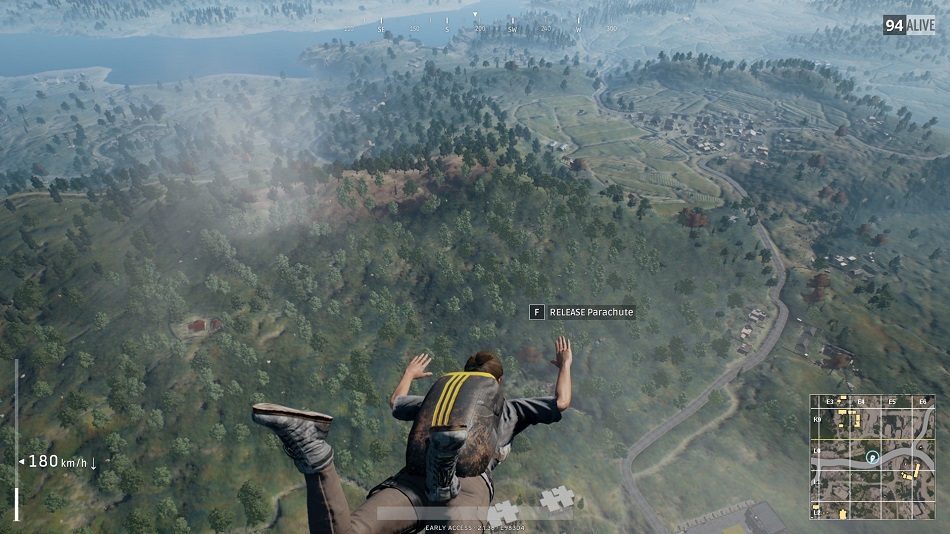 Those infrequent bursts of chest-thumping glory punctuate long stretches of almost unbearable tension, though. Indeed, the most surprising thing about PUBG is how quiet it is, in stark contrast to the fact that the game’s decidedly wacky promotional image features a man in a tie with his back to an explosion. In practice, the loudest players make the biggest targets, since matches unfold on such a large scale that just finding somebody to shoot can take ages, and spotting someone often happens due to recklessness or negligence on the target’s part. This is, largely, a stealth game, and nearly every gunshot in PUBG makes me jump.

However, before players can claw their way to victory, they’ll have to get acclimated to its quirks because PUBG certainly doesn’t make a terrific first impression. The game lacks any sort of unifying visual or stylistic theme, probably because Greene and his team rather transparently bought a bunch of their assets from the Unreal Marketplace and haphazardly dumped them over a landscape that anyone moderately experienced with Blender could probably sculpt in a matter of days. None of the textures look good up close, and the maps are full of floating objects and conspicuous artifacts. Grass will often clip through the ground floor of a building. It all looks hideous.

That said, its slapdash exterior mars intelligent structural decisions designed to keep matches moving at a steady pace, even on such a large scale.  A key factor is that players must stay inside a constantly-shrinking safe zone, and those outside the zone will gradually lose health. This mechanic serves the dual purpose of limiting camping (since everyone will have to relocate eventually) and forcing encounters as the number of remaining players slowly dwindles. A match typically lasts no longer than a half hour.

This contracting safe zone also means there’s a genuine risk to exploring more secluded areas. It may be tempting to parachute to the coast at the start of the match – as George Carlin once said, the best thing about being on the beach is that “you only have assholes on three sides of you” – but if the safe zone spawns inland, that’s time wasted hoofing it across the map instead of searching for decent loot. Vehicles can alleviate that, but it’s not possible to shoot while driving, and a car engine loudly broadcasts someone’s position to anyone within a half mile.

A kill-cam was added around the time of PUBG’s official release, and I can’t imagine learning about the game’s subtle intricacies without it. A popular mistake among novice players, for example, is to assume that going prone in tall grass is a viable strategy for staying out of sight. After getting killed trying to do this, they’ll realize that grass only draws for a couple hundred yards, and thus a prone player is still perfectly visible to someone with a good scope. That’s smart design, since keeping a uniform draw distance levels the playing field, and PUBG is full of such brutal (but valuable) lessons. 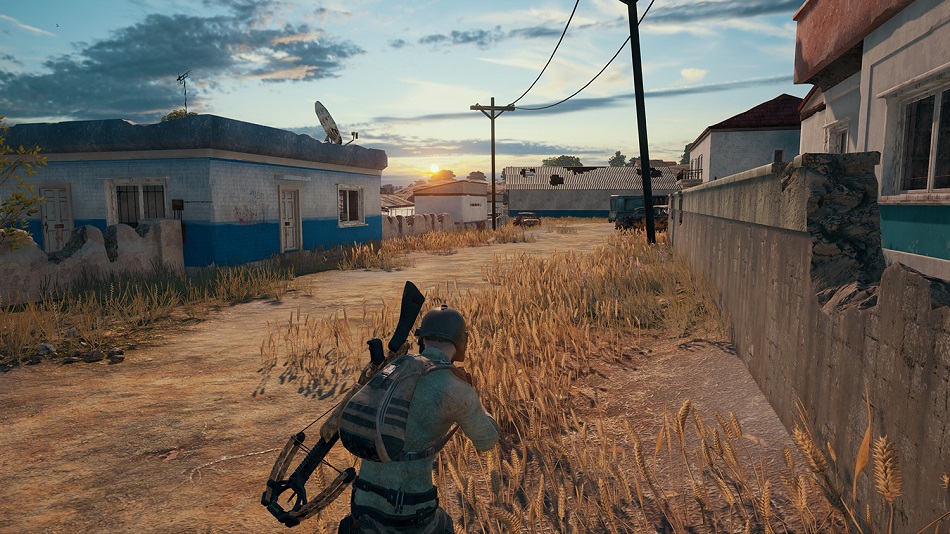 However, every smart call is counterbalanced by many instances of shoddy programming, starting with its inability to hold a steady framerate and moving on to less conventional flaws, like how taking environmental damage is still accompanied by the sound of a bullet passing through flesh, leading to a lot of fake-outs in which players can’t tell if they’re under attack or not. Another issue is that the game can’t smoothly transition players from parachute to foot, often resulting in unfair fall damage at the start of a match through no fault of the player.

Worst of all, PUBG crashes like a drunk driver with a severed brake cable — a problem only slightly mitigated by the fact that players are afforded a window in which to reboot and jump back in while their avatars are locked into whatever motion they were in the moment the game went belly-up. I have yet to complete a single co-op session in which at least one person didn’t have to chaperone a zombie bolting blankly into the sunset while they hurried to retake control.

So why put up with all of this? Because PUBG represents the literal birth of a new genre that’s paved the way for some of the greatest emergent multiplayer thrills of my life — thrills like landing a headshot on a driver whose vehicle is bearing down on me. Winning a long-range sniper duel with what I later discovered was an inferior weapon. Landing on the same roof as another player and beating him to death with my fists as he struggled to load the shotgun he just picked up. I tolerate PUBG’s frustrations because I know it’ll reward me, again and again, with moments like these.

I’ll also add that PUBG is a fantastic co-op experience. Playing with friends alleviates the scariness of lone-wolfing it, and transforms it into a full-on, massive-scale tactical shooter.

Epic’s Fortnite already has a battle royale mode up and running, and numerous other developers have announced plans to jump on the bandwagon. They’d be fools not to. The hunger is there, evidenced by the fact that as I write this, PUBG has a higher peak total of concurrent players than the next 24 games on the Steam charts combined. Some of the copycats will inevitably be better, given how much space PUBG leaves for improvement, but none of the clones will recapture the magic of learning the rules of a brand-new genre and satisfying a hunger that we didn’t know we had.

Despite how many technical and design issues it has now, and regardless of however irrelevant it may be in a few years, PUBG is revelatory, and will always hold a special place in my heart. Rating: 7 out of 10

Disclosures: This game is developed and published by PUBG Corporation. It is currently available on PC and Xbox One. This copy of the game was obtained via paid download and reviewed on the PC. Approximately 54 hours of play were devoted to the multiplayer modes. There is no single-player mode.

Parents: According to the ESRB, this game is rated Teen and contains Violence and Blood. There’s plenty of shooting accented by clouds of blood, but nothing graphic or terribly offensive. Just be warned that the game is played entirely online and that voice chat is enabled by default.

Deaf & Hard of Hearing Gamers: Although the game is perfectly playable without sound, being able to hear gunshots, vehicles and footsteps is pretty crucial to situational awareness, so players with hearing impairments will be at a significant disadvantage.

An interesting review, PUBG unfortuently did not allow player owned dedicated servers so it’s a nail in the coffin for it.

When I was a kid I thought something like this would be a great game, but naturally, I always imagined it as a single-player game with an actual story. There’s my problem with PUBG. Who are you? Where are you? WHAT IS GOING ON? Why, exactly does the map shrink with an electric storm signifying it’s ends? There’s no real premise there, it’s just an endless repetition of (admittedly fun) game mechanics. For me, that stuff really, really matters.

Hey Spencer, it seems a lot of games are cutting away the fat that we are used to like “story lines” and “voice acting” but that could be a positive for us. We don’t have to sit playing games ruined by rubbish work, what they don’t provide they cant ruin lol

Good news, they are making single player content for PUBG!