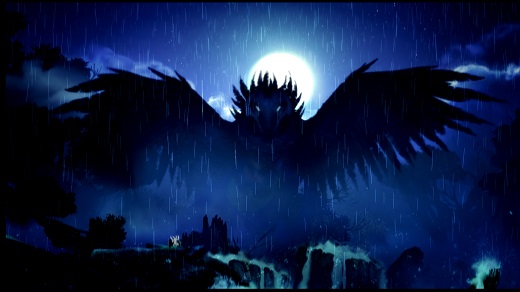 LOW The stomp attack is a bit wonky.

WTF It's hard not to see Naru as a furry Baymax.

Few things are a more sure-fire hit with me than a solid Metroidvania. I love the idea of a persistent, interconnected world that organically opens as my repertoire of skills expands and I grow an increasing understanding of how to navigate. I always find it rewarding to backtrack through previously-intimidating areas with a new perspective. Give me a double jump, and I'm going to retrace my steps and look for all of the ledges I couldn't quite reach the first time.

My affection for its subgenre aside, anyone could play Ori and the Blind Forest and immediately recognize it as an artistic marvel. I have no hesitation in naming it the most beautiful 2D game I've ever seen, and the storytellers at developer Moon Studios wield this game's audiovisual splendor like a weapon, painting a sweeping, bittersweet narrative through largely non-verbal means. They understand that "rich" and "over-talkative" are not synonymous.

Ori opens with a ten-minute, mostly non-interactive sequence that's kind of a masterpiece in and of itself. I'm hesitant to say much about it, other than Moon Studios conjure up more charm, dread, wonder and heartbreak during these first ten minutes than most developers can manage in an entire game.

The player is introduced to both Ori (a tiny woodland spirit) and the forest of Nibel surrounding him, portrayed with vivid colors and striking depth-of-field effects that create the illusion of 3D space where there is none. Through time-lapse sequences, the game's tone falls from optimistic to solemn as famine overcomes the forest. Witnessing this turn of events, I immediately sympathized with Ori, and the once-lovely Nibel became a setting that I wanted to protect.

I can't overstate just how gorgeous Ori is, and how the rich colors and exquisite animations communicate so much that the minimal dialog doesn't. There are speaking roles in Ori, but the best character work involves those who don't talk.

Surrounded by jagged structures and deadly mechanisms, it's impossible not to view the adorable, luminous Ori as a tiny spark of hope in a broken world. On the flipside, the owl-like creature who acts as Ori's primary antagonist is a dark, towering menace whose screen presence is so strong that I actually jumped whenever it attacked me. And where the game's visual design initially feels black-and-white, Moon Studios frequently subverts expectations; villains are revealed to have more depth than initially apparent, and their arcs are never resolved in ways I expected.

While the story is wonderful, it's also not overplayed. Expository dialog is provided when it's needed, but after the opening scene, players are largely left to tinker and prod as they see fit. Since exploration and discovery are vital components of a Metroidvania, most people will naturally familiarize themselves with this world. Nibel is so full of wonder and tragedy that combing the environments yields far more than just stat upgrades, though those are plentiful as well.

Art direction and storytelling aside, Ori is a lovely little platformer, transforming its title character from a helpless speck to a borderline superhero, and delving into clever mechanics once it gets the mandatory double-jump and wall-break abilities out of the way. My favorite was the ability to bounce Ori off of airborne projectiles, leading to some sequences in which I used the spray of enemy bullets to reach great heights by chaining deflections together. In fact, some of my most memorable moments involve clearing large stretches without ever touching the ground.

I've heard complaints that the game's difficulty spikes are too extreme. These are mostly in reference to a handful of isolated sequences in which Ori must escape from an area that's collapsing, flooding, or whatever. Speaking as someone who's easily frustrated, these segments are tough, but they're also spaced out well and serve as climactic endpoints for major sections of the game, usually in place of traditional bosses. I grow weary of this memorize-to-the-millisecond approach to platforming when it's overdone, but the escape scenes here felt like natural final exams. Aided by Gareth Coker's incredible music, there's even a bit of emotional pull to them.

Otherwise, Ori does move at an unwieldy speed, and that can occasionally make precision a tricky bastard, but the game actually felt both forgiving and flexible to me most of the time. The platforming sequences often play like puzzles (just wait and see the bit with the gravity cubes), and aside from the lightning-paced escape levels, players aren't rushed. Checkpoints can also be created virtually anywhere, so when a great deal of progress is lost, it's usually the player's fault.

Putting those minor issues aside, Ori and the Blind Forest is an artistic masterclass on virtually every level—it begins perfectly, it ends perfectly, and it delivers a bounty of beautiful, creative platformer goodness in between. It is, perhaps, 2015's first inevitable lock for year-end top ten lists. Rating: 9.5 out of 10


Disclosures: This game was obtained via retail and reviewed on the PC. Approximately 10 hours of play were devoted to the single-player mode, and the game was completed. There are no multiplayer modes.

Parents: According to the ESRB, this game contains mild fantasy violence. There's no objectionable content in the game, though parents of very young children should be warned that are a few somewhat frightening images and startling scenes throughout.

Deaf & Hard of Hearing: All dialog is text-based, and sound cues don't play a vital role in the game.

Regretfully the opening scene didn’t touch me as much as it did you. I guess I would’ve preferred seeing some more time spent between Ori and Naru before the latter’s passing to further build up the bond they had. Other than that, I still need to make a lot of progress, but everything you’ve said is spot on. I love the depth of the story and the creative platforming powers. This probably will make my year-end top 5. Whether or not I’ll end up ranking it above one of my favorites from last year, Child of Light, remains to be… Read more »