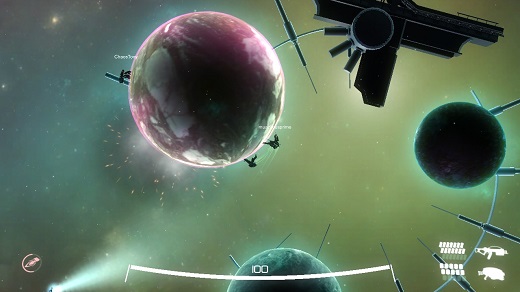 LOW The complete lack of breadth.

WTF Not being able to find opponents means that I have an excuse to not play this.

I don't consider ten bucks to be a great deal of money. Buying a full-priced console release may force me to take into consideration just how many times I'll be able to dine out in the foreseeable future, but ten bucks? Psh. Even a bad game would have to feel pretty scant and low on content for a ten-dollar price tag to feel like a rip-off.

Orbital Gear, at ten dollars, feels like a rip-off.

It's a multiplayer-only game with two modes, a handful of maps and no progression whatsoever. That it's utterly lacking in depth or sheen I can at least excuse as poor design, but that it's so lacking in substance feels inexcusable. It smells of overconfidence in its one mildly novel idea, as if the concept alone would keep players sticking around. Even most of the people on Steam who are giving this game good reviews have spent less than an hour with it.

The mildly-novel idea in question is that Orbital Gear is a side-scrolling arena shooter set in space where players contend with distorted gravity. Levels are arrangements of tiny planets, each with its own gravitational pull. Participants are frequently sideways or upside-down, and leaping from one planet to another can send the players into awkward lurches as they transfer from one gravity well to the next.

The arenas are a bit vertically-oriented, but otherwise developer Night Node essentially does nothing else with this gimmick. It affects movement, but not combat, and this is a shooter in which the combat is considerably more important than the movement. The distorted-gravity idea is never elevated beyond a neat physics trick; it's a platforming mechanic in a game that has nothing to do with platforming.

Taken for what it is, Orbital Gear is tame and underwhelming. Of the dozen or so weapons, the vast majority simply fire particle effects of varying colors at varying speeds; again, attempts to work the gravitational physics into the way players battle one another would have been welcome. None of the weapons have any oomph to them, either. Whenever I landed a hit on another player, there was virtually no visual or aural feedback. It's weak and unsatisfying.

It's a consistent problem, too. Of the two available modes, one is just regular deathmatch, while the other has groups of players attacking the buildings that compose the enemy team's base. I initially thought that this mode was broken, because all my projectiles were clipping through the buildings with no apparent damage accumulating. Then I saw a health meter in the top corner depleting and realized that Orbital Gear simply under-delivers so much in the audiovisual department that it's difficult to tell what's happening and if it's having any effect.

Yes, one of the biggest problems plaguing Orbital Gear is that it's difficult to find other people playing the game online, but while marketing is certainly a factor (most people probably just haven't heard of Orbital Gear), the bigger problem is that Night Node does so little draw players in for the long term. Side-scrolling combat games aren't new, and plenty of them are heftier, more substantial and cheaper than this one. Steam users can do better. Rating: 3.5 out of 10


Disclosures: This game was obtained via publisher and reviewed on the PC. Approximately three hours of play were devoted to the multiplayer modes. There are no single-player modes.

Parents: As of press time this game has not been rated by the ESRB. It's entirely bloodless shooting in cartoonish settings. Nothing to worry about, really.

Deaf & Hard of Hearing: There's no dialog and I don't even like the music, so there's nothing to miss out on.