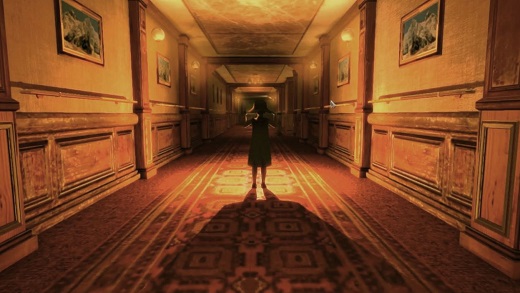 LOW Finally getting a sequence right, only to have the game crash.

The terrors of NightCry kick off with the heroine’s friend being violently pulled into a vending machine and a hooded figure with a large pair of shears rising from a pool of the guy’s blood.

Moments later, apropos of nothing, a food cart takes on a life of its own and smashes a room steward against a wall. The steward coughs up a lung (by which I mean there is literally a lung hanging out of his mouth) and the heroine snatches the key card from his corpse with a hilariously mercenary expression on her face.

I can’t take the game seriously at this point, and it’s just getting started.

NightCry is a spiritual successor to Clock Tower, a point-and-click horror series that popped up in the mid-’90s, back when games were still rather silly. For all I know, the laughs here are intentional; a deliberate throwback to the awkward animations and cheesy line readings that make Clock Tower a cult favorite. If so, mission accomplished. But, when my progress in the game’s middle chapter was wiped for the fourth consecutive time—twice due to crashes and twice thanks to my “choices” having wholly unrelated consequences—the joke stopped being funny.

NightCry is set on a cruise ship overrun with a zombie-like cult and a monster called the “Scissorwalker.” Immediately, this setting presents a maddening problem: Here’s one of the few modern horror stories with a solid excuse for its characters not having decent cell phone coverage… and yet they all have perfect signals. Both the ship and a nearby desert island are even littered with charging stations.

If it sounds like I’m nitpicking, consider that one of the game’s life-or-death puzzles involves tuning an archaic radio to call for help while the character has a working cell phone with a perfect signal on a desert island. If this action is not completed, the character will suffer an unavoidable, scripted death later in the chapter because he shrugged off an obtuse radio-tuning puzzle while he had a working cell phone in hand.

It’s worth mentioning that a pair of slip-proof gloves can be found earlier in the level. One would think that these would figure into a scene in which the protagonist slides too far down a rope, but no. In fact, using them actually triggers another scripted death further down the line. I discovered this on my fourth attempt to finish the segment, whereupon I realized that neither of the chapter’s checkpoints took me back far enough to undo these decisions. Finishing NightCry would require me to restart from the very beginning.

See, one of NightCry‘s claims to fame (and inspirations from Clock Tower) is its branching plot. It essentially amounts to one major story arc and a bunch of dead ends along the way, all triggered by the player’s decisions. The chapter menu is at least polite enough to outline which choices led to deaths, making it possible to brute force NightCry through trial-and-error.

The problem, as I hinted at before, is that the choices and consequences often bear no logical connection, and the game’s harsh checkpoint system makes the process of actually correcting errors a chore. Maybe this is developer Nude Maker trying to push replay value, but I don’t understand that. Putting aside NightCry‘s failures as both a horror game (it’s not scary) and a puzzle title (it makes no sense), replay loses its value when I know both the scares and the solutions.

As ill-suited as NightCry‘s unresponsive point-and-click interface is to action, when I’ve been chased down and sliced in half, it’s at least immediately apparent why I died, and I can rectify it without having to reboot a checkpoint from hours earlier. I’d sooner suffer a thousand irritating deaths at the hands of the all-knowing Scissorwalker (seriously, I’d swear he can see through walls) than grapple further with NightCry‘s nonsensical logic, which at one point punishes me with instant death if it takes me more than a few seconds to figure out that I’m supposed to ward off a ghost by smashing a nearby mirror with a bottle.

Technically, it’s a mess. NightCry doesn’t play fluidly or flow smoothly. Characters move agonizingly slowly, and their pathfinding is terrible. Distinguishing interactive objects on screen is extremely difficult, and progress often can’t be made until certain objects are inspected multiple times. Once that realization was made, I was double-checking everything, crippling the already-sluggish pace. It’s one of those titles that doesn’t move quickly even after players know exactly what they’re supposed to be doing.

This leads me back to my original point: Why an emphasis on replay value? Ugly, boring and stupid, NightCry isn’t even entertaining on the first go. Being told that I had to repeat a major chunk of the story for the fifth time, particularly after two crashes, was where I had to draw the line. It’s rare for me to review a game without finishing, but no matter what’s past that damn island, I couldn’t see it changing the fact that NightCry is the worst game I’ve played in years. Rating: 1 out of 10

Disclosures: This game was obtained via publisher and reviewed on the PC. Approximately seven hours of play were devoted to the single-player mode, and the game was not completed (though, hey, I unlocked a bunch of faux-endings). There are no multiplayer modes.

Parents: As for press time, this game has not been rated by the ESRB. It’s absolutely rife with over-the-top gore. This is too dumb a game to do any lasting damage but it’s still not appropriate for children at all.

Deaf & Hard of Hearing: Dialog is subtitled, and sound, by my observation, never plays a vital role in the game.

When I saw a Scissorman in the trailer I was praying this was a worthy successor to my beloved Clock Tower 2! Foiled again!