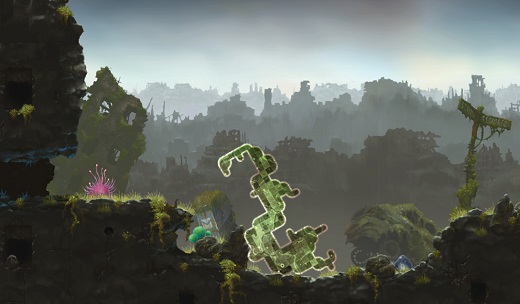 LOW The slog of a final level that precedes it.

WTF Precision platforming in a game where I have no direct control over the main character?

One of the most important virtues that young, up-and-coming game designers should learn is knowing when to call it quits. The small team behind Mushroom 11 aren't wrong in thinking that they've got a brilliant concept on their hands, but nothing stays good forever.

Of the twelve hours that I spent with Mushroom 11, I'd estimate that well over half of that time was spent on the seventh and final chapter. That's not how pacing is supposed to work, and it's a sure-fire way to kill goodwill accumulated beforehand, of which there is plenty. I was actually prepared to enthusiastically recommend Mushroom 11 until its nightmarish slog of a closing level, which takes the premise in the wrong direction and seemingly never ends. Talk about ending on a sour note.

The setup is that, in some post-apocalyptic future, players control a viscous mass of fungus that can traverse terrain by reshaping itself. Well, maybe "control" is the wrong word. Players actually use the mouse to erase cells in the fungus as it continuously regrows. Navigation puzzles are solved by using the mushroom's semi-liquid state to squeeze through narrow passages and wrap around objects as needed.

It plays like a slightly more active version of World of Goo in that many of the challenges are centered on building makeshift structures out of this strange substance. Crossing gaps and moving objects requires careful distribution of weight and a thorough understanding of the game's tricky (but reliable) physics system. It's a cool idea that lends itself well to careful, considered puzzle-solving, and for six straight chapters, developer Untame wrings the most out of the idea. They even cook up some surprisingly inventive boss battles.

What this concept doesn't lend itself well to, however, is timing-based precision platforming. That's because we have no direct control over this mass of fungus; we're only influencing it. Imagine a version of Super Meat Boy in which the player could only give the title character forceful suggestions. It'd be madness.

Sadly, this is the direction that Untame took in designing Mushroom 11's excruciatingly prolonged final stretch, in which we're forced to perform intricate acrobatic maneuvers—often under harsh timers—with only partial control over where the "character" moves. This is some of the most frustrating material I've ever come across in a video game, with one particular tiptoe peg-walk over a boiling pool ranking as 2015's most infuriating moment. What's worse is that it goes on forever. I pushed myself through Mushroom 11's lowest lows in the hopes that "surely this must be the end," and I was proven wrong on countless instances.

As time goes on, I grow more intolerant of the extreme eleventh-hour difficulty spike found in so many games. Mushroom 11 begins wonderfully, with some striking 2D background art and a bounty of inventive puzzles in its earlier levels. I want to recommend it for that, but the unfortunate truth is that too much of my time with Mushroom 11 was spent writhing in fury. I have no doubt that the folks at Untame are talented people, but before their next game rolls around, I hope they learn to quit while they're ahead. Rating: 5.5 out of 10

Editor's Note: The developers sent a message after this review was completed and stated that they had adjusted the difficulty of some sections. Before running the review, we took another look at the trouble spots, and we could not see a difference post-patch. The review stands as it was originally written.


Disclosures: This game was obtained via publisher and reviewed on the PC. Approximately 12 hours were devoted to the single-player mode, and the game was completed. There are no multiplayer modes.

Parents: According to the ESRB, this game contains fantasy violence and mild blood. There are a handful of boss battles against big, gross monsters, and there's maybe the tiniest bit of bloodletting involved, but this is overall a fairly innocuous game.

Deaf and Hard of Hearing: Sound plays no vital role in the game whatsoever.

… maybe I’ll just get the game, play up until the final chapter, then just watch an LP to see how it ends. I like a challenge, but it sounds like the team at Untame got a bit carried away.

This game is beautiful until it becomes terrible. The later levels in the game are exercises in tedium and trial-and-error – and given they make up like 3/4ths of the game’s playtime, that says something.

Level 4 is where stuff starts to go bad, but it is really in level 5 when things start to show that just because you CAN do something doesn’t mean you should.