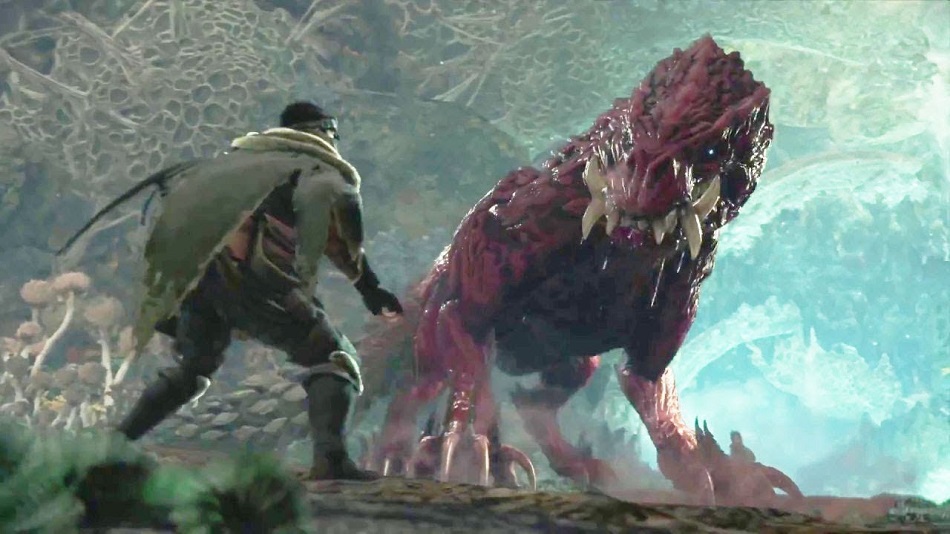 WTF Unskippable cutscenes? In 2018? In a game no one plays for its story?

There is no such thing as fighting a boss in Monster Hunter World once.

The first successful battle is reconnaissance – adapting my play style to a monster’s moveset, exhausting my resources, and ultimately barely squeaking by for the purpose of advancing the campaign.

When I return for a rematch, it’s because I need parts from said monster to build a sweet piece of equipment — and now that I know what I’m doing, I add extra parameters to the hunt for increased rewards. Maybe I can whittle it down to within an inch of death and capture it like a Pokémon. Maybe I can kill it in 15 minutes instead of the default 50. Maybe I can beat it without ever getting knocked out.

Once I have the weapons and armor I’m looking for, I use them to take on higher-level monsters, which themselves can be farmed for cool new gear, and this escalating loop goes on and on. I tend to hate grinding in games, and Monster Hunter is the grindiest grind that ever ground, which begs the question – why do I enjoy it so much?

Part of the answer is undoubtedly the excitement of the battles themselves. Bosses that would be the highlights of other titles are a dime a dozen in Monster Hunter World. This effort from Capcom features no shortage of dragons, and there are few things more purely thrilling than bringing a dive-bombing Rathian out of the air. But then there are other beasts like the Radobaan — a bony, spiky monstrosity that rolls around like Sonic the Hedgehog. Or the Diablos, which eludes players by tunneling through the sand beneath their feet. Bosses in Monster Hunter World are massive, terrifying, and unyieldingly physical.

Despite this spectacle, so much of what makes Monster Hunter World appealing is everything else that goes on when the weapons are sheathed. There’s a reason missions typically have a 50-minute time limit, and why the word “hunter” is right there in the title – the experience is less about the action and more about the process. 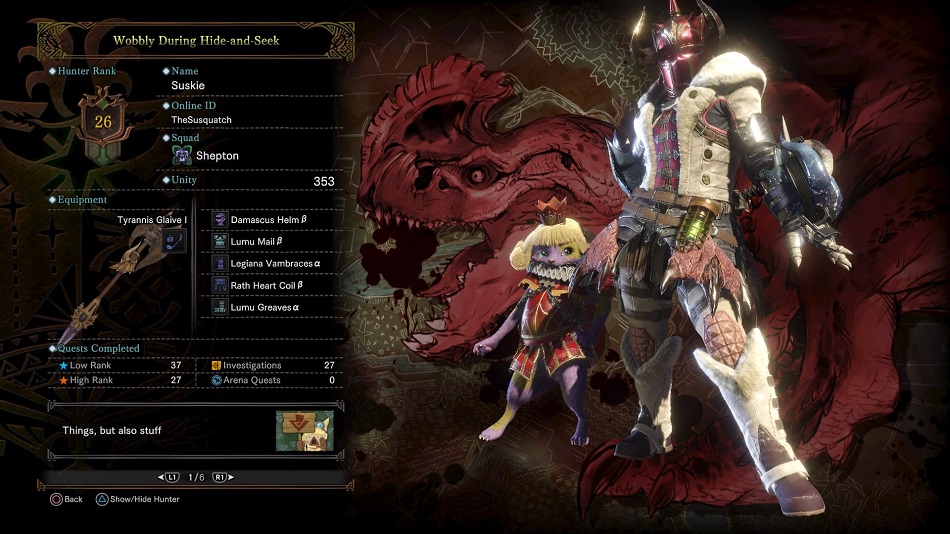 Monster Hunter World is about searching levels for clues and continuing to track monsters after they’ve retreated. It’s about the insane amount of prep work involved in a successful hunt by engaging in the wealth of secondary systems, and the dozens (possibly hundreds) of hours one invests are plenty of time to become familiar with resource cultivation, auto-crafting, armor skill stacking, and all the other systems under its hood. Monster Hunter may seem like it’s nothing but exhilarating, adrenaline-soaked battles, but it’s ultimately for patient people and the rewards are all the sweeter for it.

Offering at least ten different installments on a wide variety of platforms since 2004, this is a highly iterative franchise, and Capcom favors small, gradual refinement over major leaps in new directions. Monster Hunter World‘s title led me to believe that the series was going the way of the sandbox, but while the levels are larger and more interconnected than before with no more load times during a mission, it sticks to the same basic structure we’re used to.

Returning fans will notice a number of quality-of-life improvements. Paintballs are out, blademasters and gunners no longer need different types of armor, and whetstones are now a limitless resource — Capcom must have finally realized that keeping one’s weapon sharp throughout a mission is already enough of a hassle without running out. “Scoutflies” will now helpfully highlight nearby items and points of interest, and also cut down on time spent aimlessly searching for a target. Players can eat meals and change equipment in the field rather than having to travel three loading screens away to get it done. It’s all more intuitive and streamlined than it’s ever been.

Meanwhile, despite being the latest in such a long-running series, there’s no question that newcomers should start with World. There’s no vital story to catch up on, and this is the most user-friendly Monster Hunter to date, as well as the quickest to get players into the action. There’s still a learning curve to get over, however…

There are 14 different weapon types on offer, each sporting a unique control scheme, and Capcom still can’t be bothered to properly tutorialize them beyond laying out the basic commands and tossing players into a room with some targets to practice on. I recommend that newbies search YouTube for training videos on the intricacies of each weapon, and bear in mind that there’s no harm in experimentation. Test them all out until something clicks. 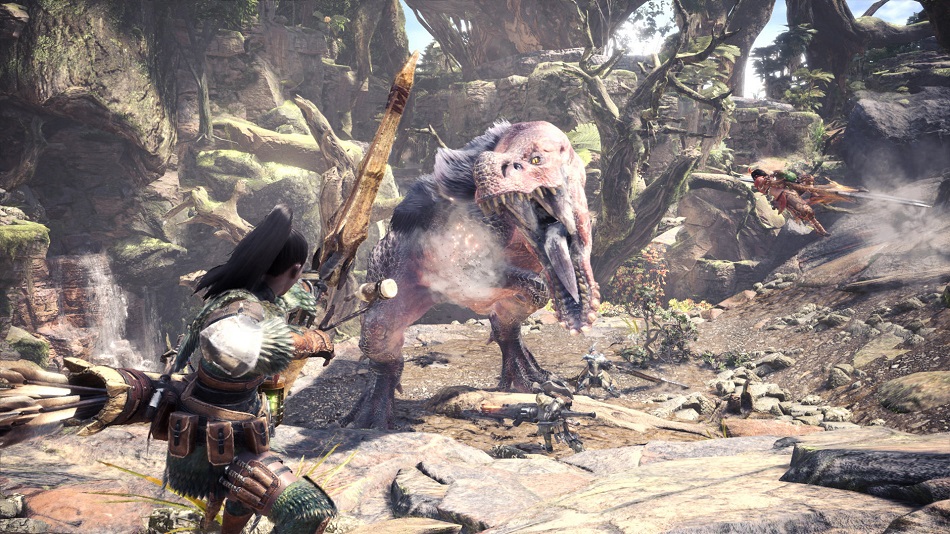 It’s also no secret that Monster Hunter is best experienced with other people. Greater numbers make the bosses less overwhelming, and we all hunger for opportunities to show off our party tricks, like how my insect glaive’s vaulting ability makes it easy for me to mount creatures, while my gunlance-toting partner can unload what appears to be a small nuclear device into a sleeping monster’s face.

To that end, World offers the most integrated online experience to date, as solo and multiplayer quests are now one and the same. When someone embarks on a mission, anyone else from that session can join in, and players can even fire SOS flares to call randoms in for backup. The online functionality isn’t seamless, as there are certain story-centric scenarios that must be experienced solo before others can join in (specifically free-roaming “expeditions” or anything involving cutscenes) but World only strengthens the franchise’s reputation as a community affair.

Last but not least, since this is the first Monster Hunter in years not designed for a Nintendo handheld, World is the prettiest the series has ever been, and it’s never more noticeable than during the breathtaking (and quite frequent) instances of monsters smacking each other about. Chasing a Barroth into a quagmire and watching an enormous, eel-like Jyuratodus spring out of the mud and wrap itself around my target is the sort of spectacle that never loses its luster.

In terms of criticisms, World only stumbles during the climactic boss encounters against the Zorah Magdaros. Despite all of the time Capcom spends hyping up this mountain-sized elder dragon, the battles simply have players scaling the beast’s body to attack static weak points, and then standing on a wall firing cannons and ballistae. The scale of these fights is awe-inspiring, but they’re a dull, shallow slog.

Aside from that disappointment and a bit too much late-game grinding in order to unlock the final string of bosses, World simplifies the series without watering it down and expands its scope without spreading itself too thin. If early sales are any indication, this is the entry that will finally make Monster Hunter a serious presence amongst Western audiences, and that’s a long-overdue victory. Rating: 8.5 out of 10

Disclosures: This game is developed and published by Capcom. It is currently available on PlayStation 4 and Xbox One. Copies of the game were obtained via both publisher and retail store and reviewed on the PlayStation 4. Approximately 70 hours of play were devoted to the campaign, and the game was completed. The entirety of that time was spent with the game’s online functionality enabled.

Parents: According to the ESRB, this game is rated Teen and contains Blood, Mild Language, Use of Alcohol and Violence. Monster Hunter is quite obviously a game about battling fantastical creatures, but it’s relatively tame and almost entirely bloodless. The profanity is strictly PG-level and the game barely makes mention of drinking, let alone glamorizes it. I can’t imagine parents having any reservations about letting children watch or play this game.

Deaf & Hard of Hearing Gamers: All dialogue is subtitled and sound cues serve no important function in the game. I played long stretches with the sound off and had zero trouble. It’s fully accessible.