The Desolation of LEGO Games 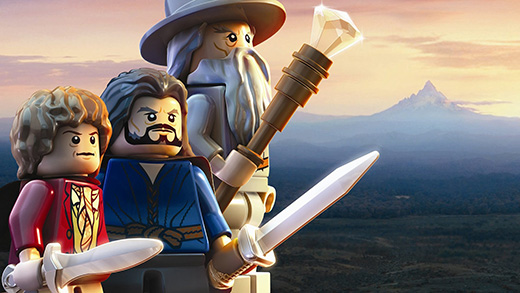 LOW Going from my Dark Souls binge to this shallow, lightweight fare.

WTF A LEGO game on PS4 and they still can't get it running higher than 30fps?

LEGO Star Wars was a perfect fit. The original trilogy is a story that we all know by heart, and its dialogue-free LEGO crossover was refreshingly unpretentious. Simply retelling a famous tale with LEGO blocks would be a novelty, but LEGO Star Wars wielded its simplicity like a weapon, honoring its source material while simultaneously feeling like its own product. It was cute, funny and original. It was a great idea, and we all know what the entertainment industry does with great ideas.

The first two Hobbit films are the latest property to get LEGO treatment, and it's not a particularly graceful pairing. Traveller's Tales have long moved past the idea of telling stories sans dialog, which means that the physical humor that was once the driving force of these LEGO games is disappointingly downplayed these days. It kind of shatters the fun of seeing famous scenes reenacted with plastic toys when all that they're doing is simplifying.

The LEGO gimmick does work on a few occasions, particularly when Traveller's Tales recreates scenes that were supposed to be serious in the films; I giggled watching the Pale Orc's freshly severed hand scurry away as he chased after it. Unfortunately, the Hobbit movies are already full of broad slapstick humor, so the LEGO theme almost feels redundant. The developers' take on the original Lord of the Rings trilogy from a couple of years ago was a much better fit; here, there's little point in a "goofy" version of something that was already kind of goofy to begin with.

Take away the draw of potential silliness and LEGO The Hobbit

is more or less the same game that we've been playing a couple of times a year for the last generation. The combat is largely button mashing, and the appeal of having dozens of playable characters is lost on this particular property. One of the most common criticisms against the Hobbit films is that the dwarves who comprise most of the cast are underdeveloped and largely interchangeable, and that's never been more glaring than when one is forced to distinguish the practical differences between Dwalin, Ori and Bofur in the heat of battle.

I remember being a bit critical towards last year's LEGO Marvel Super Heroes, but at least that game was working with a cache of iconic characters whose abilities and their application was consistent with the lore. Here, it's all arbitrary. This guy can hit things with a hammer; this guy can grapple with a flail. The LEGO games have felt spread too thin for a while now, but they seem out of ideas at this point.

The one promising new feature, at least initially, is the crafting system, wherein players can collect materials from smashed objects and use them to assemble important items. It'd be interesting if it was in any way organic, but players are always told exactly what they're supposed to be making, and the necessary components are usually in the same room.

When we disregard the staleness of these LEGO games and the increasing dearth of popular franchises to employ, my ongoing criticism with these titles is that they feel too signposted, too led. When a button press is needed, a prompt appears. When a character-specific ability is required to overcome an obstacle, that person waves his arms wildly so the player can't miss him. Beyond that, the basic solution to every "puzzle" is essentially to smash every object in the vicinity, either to mine materials or to repurpose the blocks into another object, accomplished by holding a single button.

I do realize that these titles are aimed at children, but speaking as someone who was playing Zelda at the age of seven, I've never bought into the idea that family-friendly games need to be watered-down and oversimplified to accommodate younger audiences. Kids are clever. They deserve more rewarding entertainment than this. They deserve more effort after putting up with (by my count) at least fifteen LEGO games since the Star Wars crossover.

I can't work up the energy to actively dislike the LEGO games so long as they're this innocuous and harmless, and spanning just over a dozen levels, LEGO The Hobbit

doesn't waste too much of the player's time. But, with all of the most fitting licenses having been used up already, the LEGO spoof series is losing its relevance, and it's not a particularly good time anymore, either. Rating: 5.5 out of 10


Disclosures: This game was obtained via publisher and reviewed on the PlayStation 4. Approximately six hours of play were devoted to the single-player, and the game was completed. No time was spent in co-op.

Parents: According to the ESRB, this game contains cartoon violence and comic mischief. This is a LEGO game, and as such, there's absolutely nothing to worry about in terms of inappropriate content. Extremely young children may find the plot difficult to follow if they haven't seen the films, but that's about it.

Deaf & Hard of Hearing: Subtitles are available for all dialog, and I didn't pick up on sound cues playing a vital role in any way. Shouldn't be a problem.