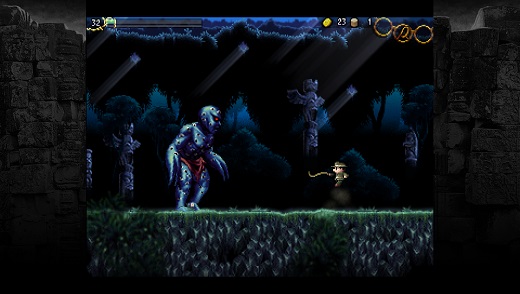 HIGH That fleeting glimmer of optimism when actual progress is made.

LOW Re-orienting after any amount of time away.

I consider myself a pretty smart guy and I've got the school records to back that up, so it's not easy for me to concede that La-Mulana EX is just too complex for me to wrap my mind around.

Upon starting, a couple of friends who'd already reviewed it advised that I use a guide. I let my pride get the better of me, ignored this suggestion, and subsequently spent hours hitting brick wall after brick wall. When I finally looked up an FAQ, I had no reference point. I had no idea which of the game's seemingly hundreds of stone-walled rooms I was in, how much progress I'd made, or whether I'd even been going in the right direction.

I put it on hold at this point to take care of another review game, and when I finally revisited La-Mulana EX with the hopes of finishing it, I found I'd completely lost my orientation. It's as far from being a winnable game as anything I've ever seen—it's too overwhelming for binges, and too reliant on a persistent sense of direction for short sessions. I don't like when a game treats me like a moron, but this thing is set about a mile in the opposite direction.

La-Mulana EX is a remaster of an obscure action-adventure title that I'd never heard of until now, featuring an Indiana Jones-esque explorer attempting to delve into the most unintuitively designed ruins imaginable. Every chamber seems to have about five exits, and not a foot of it has gone un-booby trapped. Dead ends abound, and the ruins are full of devices with ambiguous purpose.

I've seen the game described as a Metroidvania, but I'm not sure that I'd agree. Yes, it is a 2D action-platformer with a heavy emphasis on exploration, but  a good Metroid game has a tangible sense of direction and doesn't confront the player with a fork in the road every couple of feet. One of La-Mulana EX's biggest failures is that it lacks distinguishable "levels." There's a sense of progress in a Metroid title as the player travels from forested regions to fiery caverns to underwater tunnels, yet these ruins consist of nothing but nondescript tombs. I can't explore if I can't mentally keep track of where I am.

I'd sooner liken La-Mulana EX to a full-length Zelda dungeon, and the game serves as a terrific example of why Zelda games also consist of elements other than dungeons. A player could take any ten-minute segment of La-Mulana EX's winding labyrinth and gawk at its intricacy, but with no downtime and for such a long game, it becomes exhausting. I like puzzles, but every once in a while my mind needs a break.

La-Mulana EX was very obviously designed to put off all but the most hardcore action-platformer fans, so dismissing it for being too intricate seems like a lost cause. I certainly wouldn't call it a bad game, and in fact, there are a few things that I like about it. Platforming, for example, demands a bit of planning, since jumps can't be corrected in midair. The controls and combat reinforce the idea that everything in La-Mulana EX is a puzzle, which would be great if it weren't so constant and strenuous.

Furthermore, I can admire the work it must've taken to put together such a complicated, branching network of ladders, trapdoors and mechanisms. That said, La-Mulana EX has the unusual problem of being too smart for its own good—it's too wearying to enjoy, but difficult to shrug off as a poor project. Let's split the difference and call it a six out of ten, and hope that anyone else brave enough to venture into these ruins has a higher mental capacity for this sort of thing than I do. Rating: 6.0 out of 10


Disclosures: This game was obtained via publisher and reviewed on the Vita. Approximately 12 hours of play were devoted to the single-player mode, and the game was not completed. There are no multiplayer modes.

Parents: According to the ESRB, this game contains fantasy violence, mild blood and suggestive themes. There are blood effects whenever certain enemies are killed, but they're extremely mild and the cutesy, retro-style graphics prevent the violence from being taken seriously.

Deaf & Hard of Hearing: All dialog is text-based and sound cues are never important. I played most of the game with the sound off and had no trouble.

I consider myself a smart person as well, but I’ve seen friends play bits of La-Mulana, and… no. No this game is not for me. Like you I hate when I can’t keep track of my progress, and when a game compounds that problem by intentionally making so many of its areas nearly indistinguishable from one another, I think it’s best avoided.