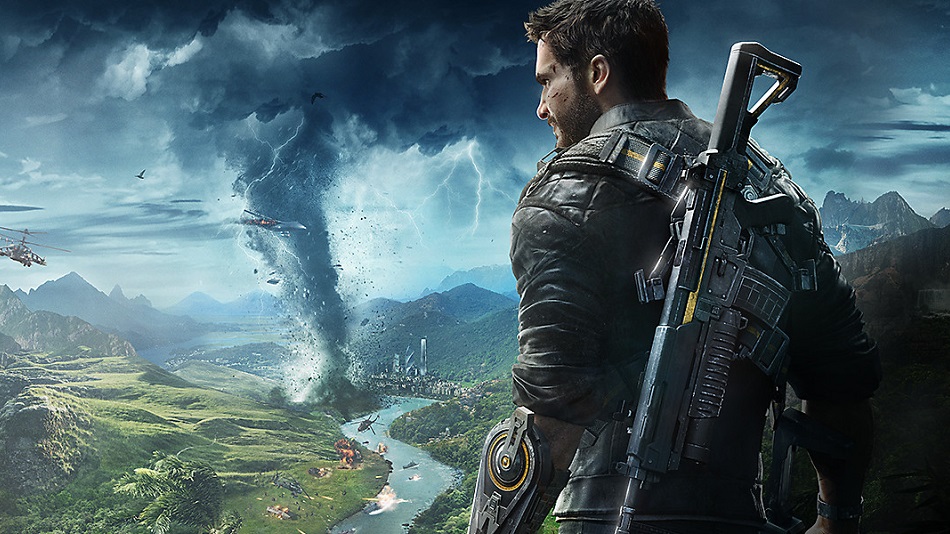 HIGH The destruction wrought by the new weather effects.

LOW The lack of commitment to said weather effects.

WTF The grapple upgrades, which have zero practical use.

Just Cause 4 is brand new, but it feels like it’s already a generation old.

The series still exemplifies third-person sandbox play in that it makes me feel like a child who takes just as much pleasure in trashing his Lego sets as he does in building them. This is a franchise fueled entirely by the basest amusements – exotic locations, massive explosions, unlimited firepower and a goddamn grappling hook. It’s a guilty pleasure, but there’s still a place in this industry for it. Just not like this. Just Cause 4 offers surprisingly little polish to compensate for its lack of new ideas, and the result isn’t just something I’ve already seen before, but something I was considerably more impressed with the last couple of times.

For those unaware, the Just Cause series centers on Rico Rodriguez, a mercenary who specializes in destabilizing governments. The plots of these games have never been engaging, though that’s almost part of the charm — it’s as if becoming too attached would get in the way of players enjoying large-scale carnage. No, the whole point of Just Cause is to revel in the destructibility of the environments and the sheer number of ways we can send things crashing down.

Although players can hijack any vehicle in the game – and I do mean any vehicle, up to and including passenger jets and aircraft carriers – their main tools for transportation are a grappling hook, a parachute, and a wingsuit. All three remain a blast to use, giving us total freedom without sacrificing the work that makes getting places rewarding. It takes practice to be able to maintain a single glide for minutes at a time, but it’s ultimately so much more enjoyable than just effortlessly flying around in a helicopter. 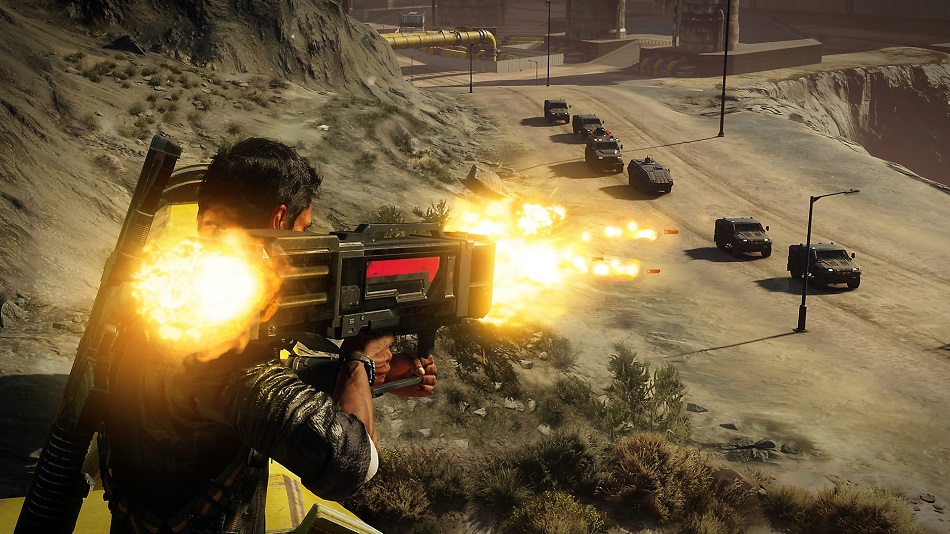 This was all true in the last game, though, and Just Cause 4’s new additions are disappointingly weak. Rico can now use his grapple to attach balloons or jet boosters to objects, and while the effects are briefly amusing, they’re just roundabout methods of getting items out of the way – something that the standard tether already does. I never once used either of these tools outside of the missions introducing them.

As a setting that exists purely to be blown to pieces, Solís – the fictional South American country in which Just Cause 4 is set –just isn’t interesting. The jaw-dropping scale of Just Cause 2 meant that it offered mountains, beaches, forests and cities, all transitioning seamlessly from one to the next, but that vast variety has left Avalanche with few new ways to mix up the scenery. Solís feels indistinguishable from Panau or Medici, and frankly, sheer size just isn’t as impressive as it once was.

The inclusion of extreme weather effects is an enticing change, particularly in a series so focused on widespread mayhem. The evil regime in Solís is developing something called Project Illapa, which allows them to create hazardous storms at will. The missions in which Rico captures Illapa’s command centers make great scripted use of these effects. The sandstorm sequence in particular mimics the confusion and chaos surrounding similar bits in Avalanche’s own Mad Max. 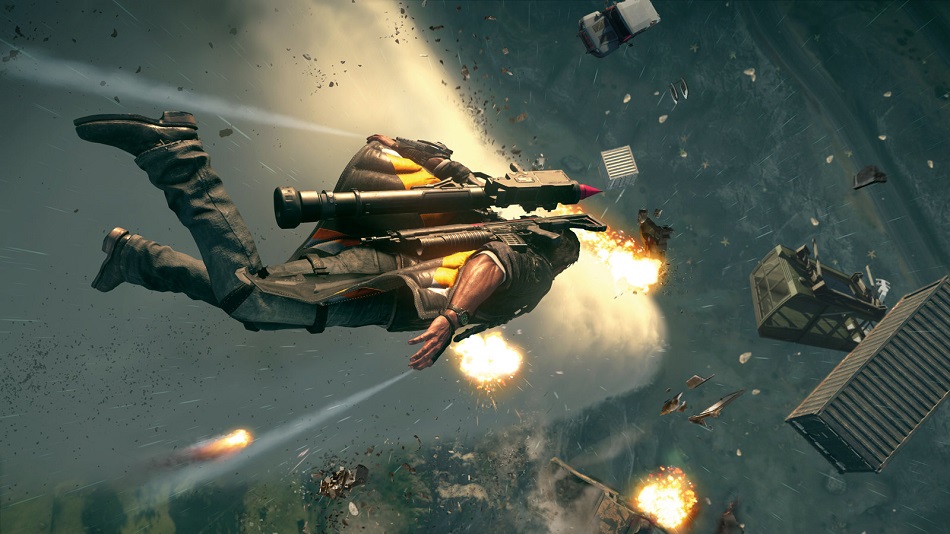 Aside from those few story missions, the weather effects are regretfully under-utilized. The marketing buzz surrounding Just Cause 4 led me to believe that the much-hyped tornado would dynamically roam about as a random element to stir up the already-hectic action, yet the tornado in my game just stood in the same spot for the entire campaign apart from the one scripted sequence that made proper use of it. I don’t know if my copy was glitched or if this was by design, but either way, it was a letdown.

And if it was a bug, it was one of a thousand. I’ve seen things like wild animals spawning out of thin air and remaining locked in T-poses for several seconds before moving, and I’ve seen airliners on runways crank 90 degrees upwards and take off like rocket ships. Things like these are in addition to Just Cause 4 looking absolutely hideous even when it’s working correctly – it caps at a jagged 720p, it’s littered with pop-in, and the character models would have looked fine at the end of the last console generation.

This series simply hit its peak eight years ago, and has been struggling to stay relevant since. Just Cause still has the potential to stand alongside power fantasy franchises like Earth Defense Force and Dynasty Warriors, but this latest entry just feels old, sloppy, and phoned in. The formula can still work and I was kinda-sorta entertained by Just Cause 4, but nothing about it was impressive in the least.  Rating: 5 out of 10

Disclosures: This game is developed by Avalanche Studios and published by Square Enix. It is currently available on PlayStation 4, Xbox One and PC. This copy of the game was obtained via publisher and reviewed on the PlayStation 4. Approximately 30 hours of play were devoted to the single-player mode, and the game was completed. There are no multiplayer modes.

Parents: According to the ESRB, this game is rated M and contains Blood, Strong Language and Intense Violence. The game is a nonstop parade of gunfire and explosions, though the blood effects are barely noticeable and it’s all very silly and over-the-top. A few occasional F-bombs are thrown about.

Deaf & Hard of Hearing Gamers: Subtitles are available for all important dialogue, and the game is good about indicating which direction players are being attacked from. I played a few long stretches with no sound and didn’t have any issues. This game is fully accessible. 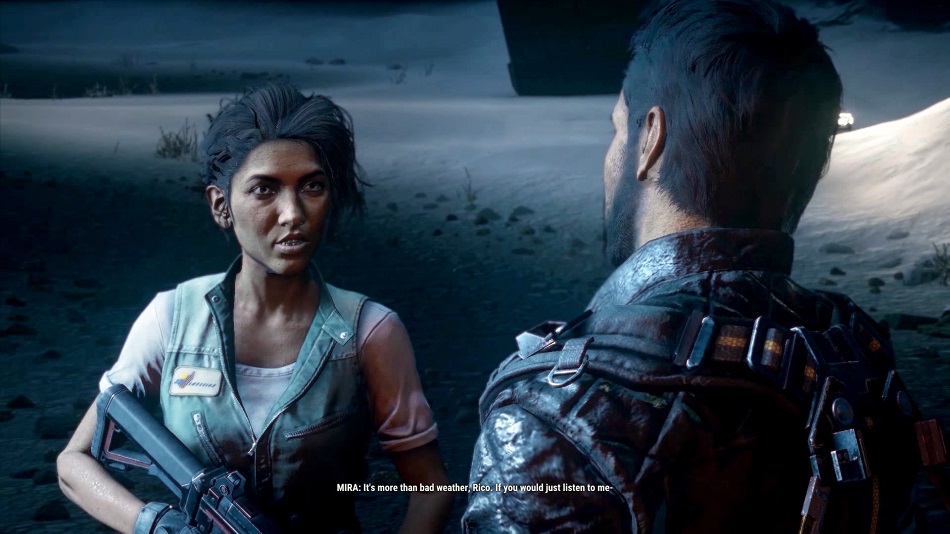 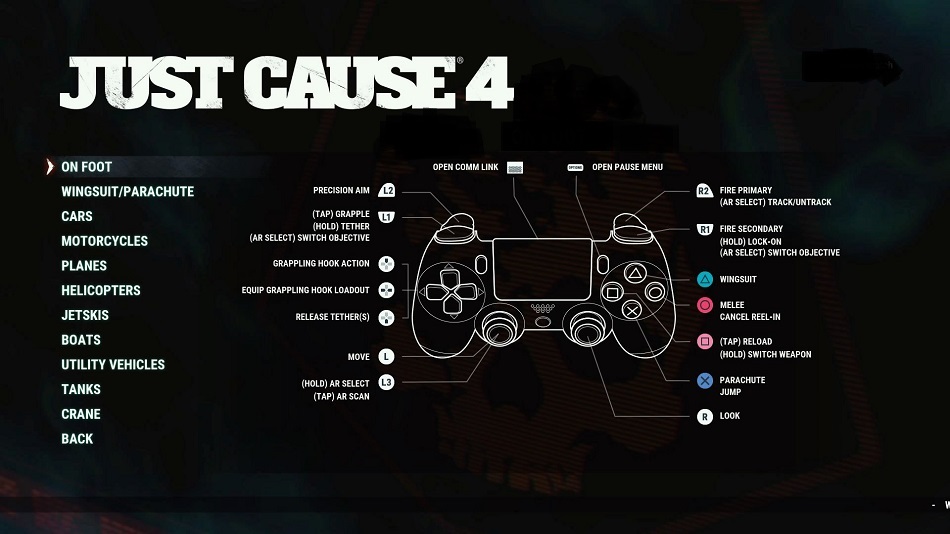 I agree with Alex. If you felt this game was halfassed, a 5/10 seems perfectly appropriate.

I got this game and played it once just to try out (I have other games I’m going through at the moment, so I didn’t stop because of my impressions from a single playthrough), but something struck me about it as just . . . well, actually, what struck me is that nothing struck me. I felt I’d played it before, but that I had a better time the previous time. Nothing about this really pulled me in.

Hey guys! This comment isn’t related to the review of this particular game, but I’ve noted that you guys get a lot of backlash for many of your reviews, because games in general, apparently, seem to score lower with you than other reviewers. I just wanted to let you know that I really appreciate what I personally feel are more honest reviews than some of the other major critics out there, I feel they might be too influenced by publishers sometimes, to score a particular game higher than it deserves. Keep up the great work, I’m thoroughly enjoying reading your… Read more »

Thanks for the wonderful comment, and thanks for reading!