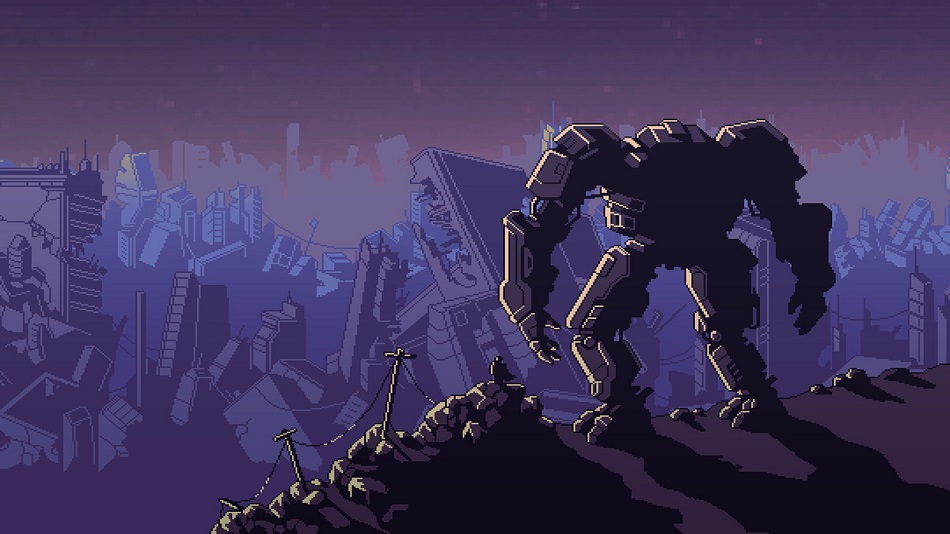 WTF The Hook Mech, whose usefulness eludes me.

When Dan Lipscomb reviewed Into the Breach earlier this year, his lone criticism was that there was no penalty for playing on a lower difficulty. While I came to appreciate the flexibility with which Subset Games allows players to get what they want out of this experience, I’ll admit that I had to waive my usual policy of considering a game finished and shelved once the credits have rolled. Anyone who doesn’t move the goalpost back a bit will be done with Into the Breach in a couple of hours, and will walk away with little appreciation for how deep and meticulously balanced it is.

Into the Breach is a roguelike with permadeath, procedurally-generated missions, and all the usual jazz. But as with FTL – Subset’s equally addicting previous release – it’s grounded in unique mechanics that make the repetition appealing. On the surface, it’s turn-based strategy with the simplistic, easily-readable visuals of something like Advance Wars. Players will have the basic commands down in minutes, and every battlefield is small enough to fit on a single screen. Early impressions are hardly overwhelming.

Into the Breach’s big gimmick, however, is that enemies will always broadcast their attacks one turn in advance. The fact that this doesn’t make the game too easy is a remarkable feat in balance. Players have three units in their squad and are heavily outnumbered in every mission, so victory is less about taking risks (since we always know what the opposing team will do) and more about economic use of limited moves. 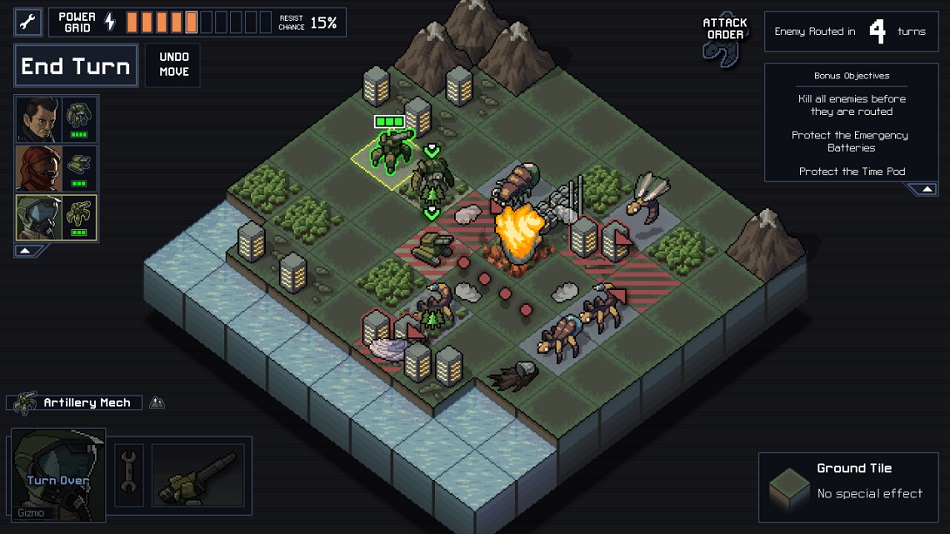 What makes this premise even more interesting is that the ultimate goal of a campaign isn’t necessarily to defeat the enemy or even to survive, but to preserve the infrastructure. The giant bugs that comprise the opposition will often target buildings, and damage to “the grid” carries over from one battle to the next. Conversely, our mechs are restored to full health at the beginning of every mission, even if they’re destroyed. So in an odd twist, using our own mechs to absorb incoming damage is a real and important strategy.

Further complicating matters is the fact that physically shifting enemy units around the map can be just as valuable as attacking, if not more so. Many mechs in Into the Breach push or pull enemies rather than deal direct damage, so if it’s not possible to kill an insect before it strikes the grid, diverting the attack so that it misses the target may be another option. Players are also encouraged to force enemies to deal damage to one another whenever an opportunity presents itself — with one well-placed nudge, a bug about to destroy a building will instead strike one of its teammates.

With such a clear-cut set of rules, Into the Breach almost plays like a puzzle game. We have all of the information we need to know exactly how a turn will play out, so winning is a matter of using that predictability to maximize what we can accomplish with a squad of three. Incidentally, this eases the sting of a hard reset whenever a campaign is lost, since our failures feel like our own fault. 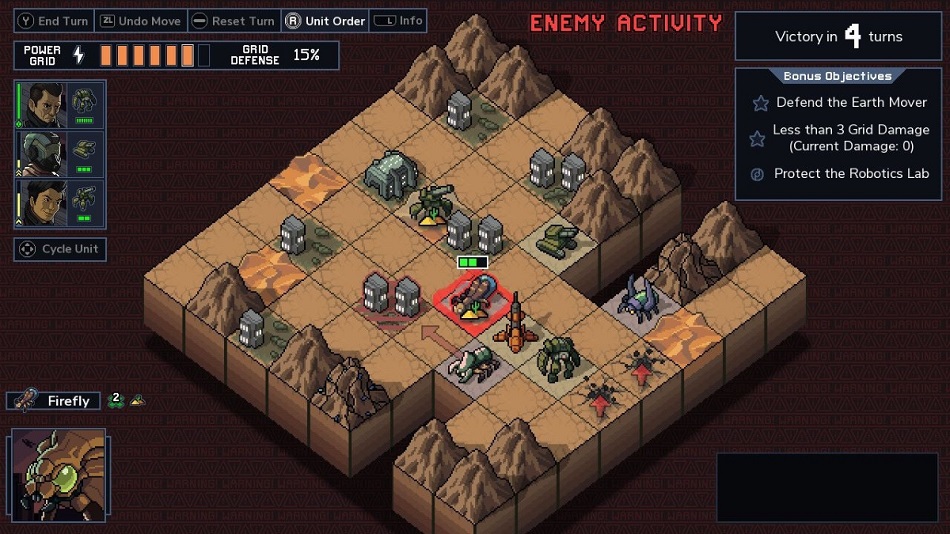 The campaign offers a total of four islands to clear, but players are allowed to end a campaign after only two, and the final mission scales accordingly. This low barrier to rolling credits is what I meant about Into the Breach feeling underwhelming if simply finishing it is one’s only goal. The starting squad consisting of a generic melee mech, a generic tank, and a generic artillery unit isn’t even that interesting, effective as it may be in easing players into the basics. In its default incarnation, Into the Breach undersells its value to those who don’t dig deeper.

However, the value is considerably boosted by the seven other unlockable mech squads and their corresponding sets of achievements. Each one has a theme and a valuable lesson to be carried over into subsequent attempts — the Flame Behemoths don’t deal much direct damage but set fire to things, forcing players to pay attention to status effects and environmental hazards. The Steel Judoka focus heavily on pointing enemy attacks at one another. The Frozen Titans ask whether temporarily disabling enemies with icy attacks can be more valuable than killing them outright.

With the possible exception of the Blitzkrieg (and I’m open to the idea that I never fully grasped the fundamentals of making that team work) there isn’t a weak squad among the group, and mastering each of them feels like an entirely unique game. With many roguelikes, we’re building toward one perfect run. With Into the Breach, that perfect run comes quickly, but we’re challenged to continuously raise the bar.

This was all true when the game launched on PC earlier this year, but Into the Breach feels even more at home on the Switch, since it’s not technically demanding and its campaign options cater to both long and short sessions alike. I’m glad I had an excuse to revisit it, because I nearly failed to recognize this gem as one of the year’s best and most addicting releases. Rating: 9 out of 10

Disclosures: This game is developed and published by Subset Games. It is currently available on PC and Switch. This copy of the game was obtained via paid download and reviewed on the Switch. Approximately 42 hours of play were devoted to the single-player mode, and the game was completed many times. There are no multiplayer modes.

Parents: This game has been rated E10+ by the ESRB  and contains Fantasy Violence, Mild Blood, and Mild Language. The insects have vaguely gooey death animations, and that’s about as bad as it gets. Highly inoffensive.

Deaf & Hard of Hearing Gamers: All dialogue is text-based, and audio cues play no important roles in the game. It’s fully accessible. 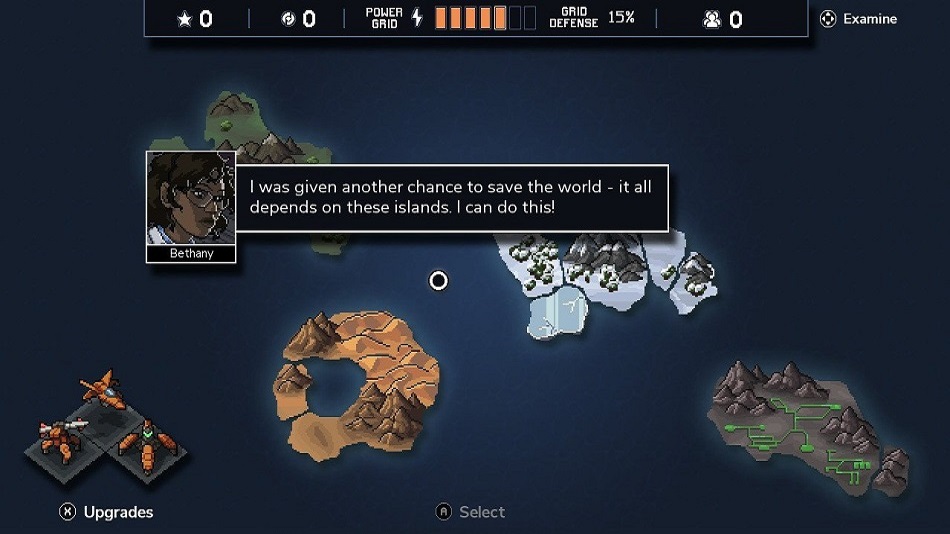 Remappable Controls: No, this game’s controls are not remappable. There is no controller diagram. The game revolves entirely around selecting and ordering units with the left analog stick and A button, while the other buttons are used to open sub-menus and toggle secondary commands.