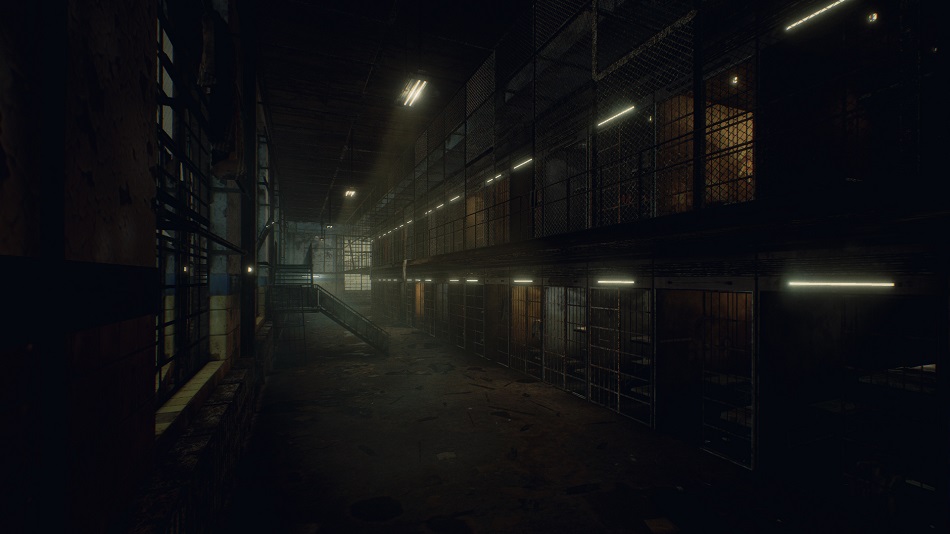 LOW My character recoiling in terror at Roy the security guard.

I can’t find much information on Davit Andreasyan, the creator of Inmates. This appears to be his first commercial videogame, and if the credits are to be believed, he developed it all by himself. That’s the sort of ambition I don’t want to discourage.

Unfortunately, Andreasyan has taken on the genre most ill-befitting to a first-time solo project – horror. Great titles can be made with limited resources, and there’s plenty of evidence of that. However, scaring me requires that I become immersed, and it’s difficult to do that when the creakiness of the presentation constantly reminds me that I’m playing a videogame.

Admittedly, it made me jump a couple of times, but it doesn’t get points for that – anyone can insert loud, sudden noises into a piece of work. Playing Inmates, I chuckled far more than I screamed, which isn’t a good look for a serious-minded horror adventure, and this is the central issue — it’s a horror game that’s not scary.

I was told early on that someone named Roy was hunting for me. I assumed this was where things were supposed to get frightening, but when I encountered Roy, he was just a security guard with a flashlight whose robotic walking animation lent him all the menace of a park patron from Roller Coaster Tycoon. It’s a silly moment, compounded by my character’s ridiculous “please oh god no” routine delivered with D-movie cheese by someone who is definitely not a professional voice actor.

Worse still, the only encounters with Roy are scripted sequences in which the player getting caught is part of the story. There’s only one sequence at the very end in which it’s possible to die, so the remainder of the playtime has zero stakes. Thus its only tricks are (a) easy jump scares and (b) “creepy” images undermined by unconvincing presentation. I know this room full of corpses hanging from nooses is supposed to make me queasy, but why are the bodies jiggling? Is that a ragdoll screw-up? Or is it a deliberate effect that just looks like a hilarious technical quirk? 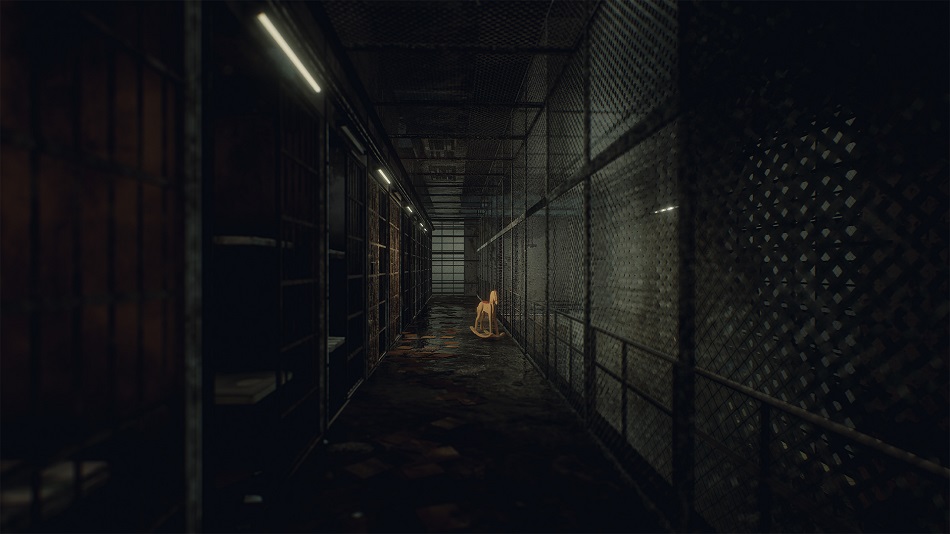 The near-complete lack of a fail state in Inmates qualifies it, in my eyes, as a narrative adventure game (or “walking simulator,” for those who prefer the term) albeit one that looks like Outlast in screenshots and goes “boo” every once in a while. It has a story to tell, in which a man named Jonathan attempts to escape from a decrepit prison in which a bunch of strange, unnatural things are happening. The game’s trippy, tone-setting opening sequence makes it rather clear that this is not the real world, and from there a mystery is unraveled.

To the game’s credit, the big revelation isn’t what I’d predicted. There are glimmers of a creative psychological thriller here, but all of the important information is saved for one massive, clumsy exposition dump near the end. Prior to this, the game is full of random imagery that even the big twist can’t explain away. And what’s with all of the Christian symbolism? Does Andreasyan just assume that religion is inherently creepy?

The asylum itself looks dank and unpleasant, as it should, though it’s painfully difficult to actually navigate thanks to an abundance of locked doors and a limited color palette. When I’m told to backtrack to such-and-such room, I have no idea where that is because everything looks the same. The lack of a run function doesn’t help, and comes across as an attempt to pad the length of a title that can still be completed in under two hours.

Inmates has a handful of puzzles, and they’re all a breeze. Most of them involve some variation on entering a passcode that can be found in the same room. For example, when I come across a radio early in the game, I had to tune it to frequency 144, and I know this because there’s a piece of paper right next to the radio with “144” written on it. That’s this game’s idea of a puzzle.

As an exploration title the environments are dull, and navigating them is a chore. As a puzzle game, it’s a cakewalk. As a narrative, the framework of a solid concept is spoiled by poor presentation and pacing. As a horror game, it’s not scary. What Andreasyan was able to create here all by himself couldn’t have been simple or easy, but tell that to the person who has thousands of Steam games to choose from and a finite amount of time and money to spend on them. Rating: 3.5 out of 10

Disclosures: This game is developed by Davit Andreasyan and published by Iceberg Interactive. It is currently available on PC. This copy of the game was obtained via publisher and reviewed on the PC. Approximately two hours of play were devoted to the single-player mode, and the game was completed. There are no multiplayer modes.

Parents: As of press time, this game has not been rated by the ESRB. There’s some disturbing imagery and one brief burst of violence at the end, but overall, it’s nowhere near as graphic as one might expect. Teens could handle this.

Deaf & Hard of Hearing Gamers: Being horror-themed, atmospheric sound plays a major role in the game’s presentation, but it’s perfectly functional without it. Subtitles are enabled for all dialog, though the translation is awful.