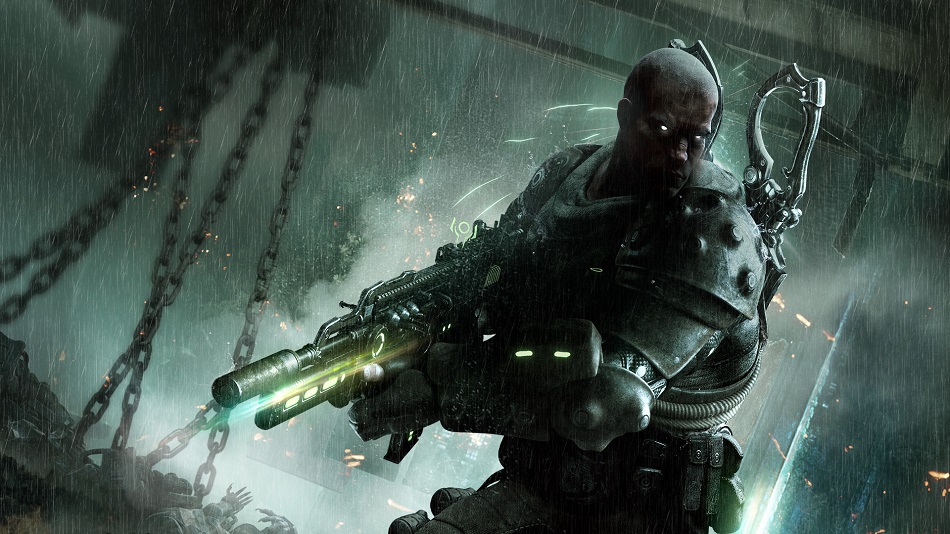 LOW Too many to count, but those damn teleporting enemies rank high.

WTF Arlen is one of the messiest boss battles I’ve ever seen.

If Dark Souls has had one negative effect on my life, it’s that it has too often convinced me to give bad games the benefit of the doubt. There’s always a lingering sense that I’m misunderstanding something – that I’ll have some moment of clarity, or that an esoteric intricacy will finally click. It’s this stubbornness that pushed me to finish Immortal: Unchained, and I’m now able to declare that there is no light at the end of this tunnel. It really is as fundamentally broken as I’d first thought.

I don’t make the Dark Souls comparison lightly. Immortal is another in a long line of action-RPGs to heavily channel From Software’s famous series, and it’ll save time if I assume that everyone reading this knows what that means – third person, stamina bar, cryptic plot, winding level design, the whole shebang. Souls are “bits.” Bonfires are “obelisks.” The Estus flask is a syringe. Toadman Interactive isn’t hiding the influences here.

It’s tough enough just to get that formula right, but Immortal takes it a step further by attempting to re-center the combat almost entirely around ranged weaponry, and it’s staggering how much this approach misfires. If “Dark Souls with guns” is a premise that could ever work, Toadman hasn’t made a case for it.

The first speedbump is that Immortal can’t be played like a traditional shooter, because the aiming controls are dreadful. It’s over-sensitive to the point that I had trouble aiming at targets that weren’t even moving, as my reticle would wildly slide past what I was trying to hit. The only sensitivity option in the menu also affects the third-person camera, so attempting to fix this problem only leads to an even greater one. 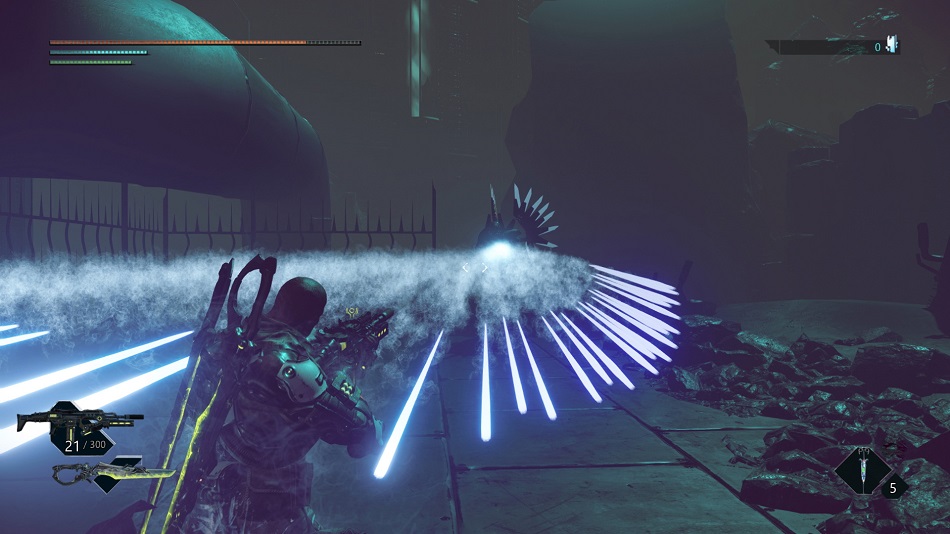 As such, players are reliant on the targeting system, and this makes Immortal’s dismemberment mechanic pointless since aiming at specific body parts is out of the question. However, the bigger issue is that the lock-on system itself is laughably unreliable. There doesn’t seem to be any concrete formula as to which enemy it decides to focus on, and it’ll often switch targets for no reason, turning encounters against multiple enemies into frantic, incomprehensible flailing.

Worse, Immortal’s levels almost never feel designed for ranged combat. If I’m constantly being shot at from afar, I need either cover or space to move around, and Immortal consistently lacks both. With no shields and no equippable armor, dodging is the only defensive option. That’s fine for melee-centric combat in which I can easily read enemy tells, but it’s considerably less helpful when I’m constantly being shot at from off-screen. There’s a reason that dodging bullets in videogames is usually accompanied by a slow-motion mechanic – it’s unreasonably difficult otherwise.

Since even the most advanced civilizations in games still can’t spring for a few guardrails, dodging also comes with the incessant risk of fall damage. However, it’s taken too far here – I’d barely jam my ankles dropping from the height it takes to kill the character.

Of course, Immortal is supposed to be overwhelmingly tough – and boy howdy does the marketing want everyone to know – but for a game that pulls as much from Dark Souls as it does, it misunderstands so much of what makes that series a fair, balanced challenge. What is the point of giving me a stamina meter if so many enemy attacks can knock me down when it’s still full? A single hit often translates to instant death in Immortal since the protagonist will fall to the ground and then be killed from consecutive shots before he can get back up. 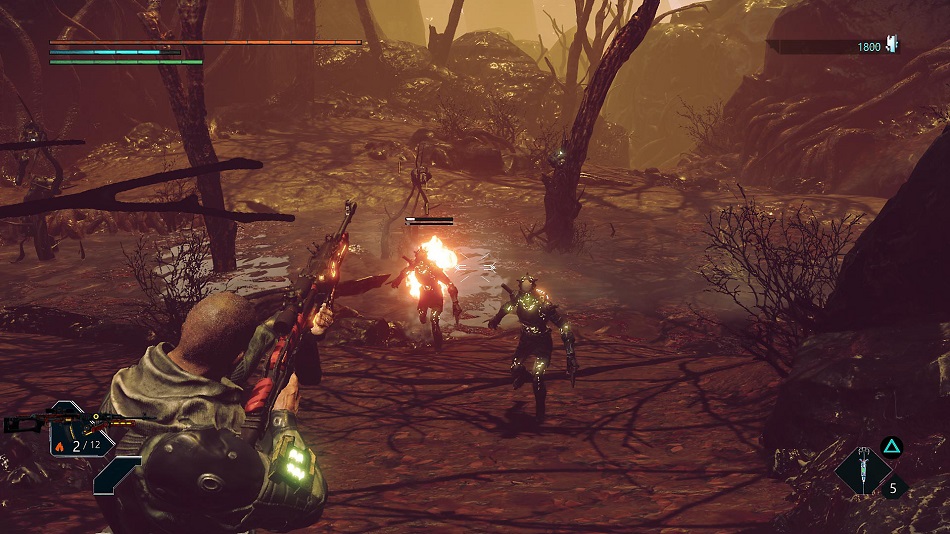 Although the imbalances of its combat seep into every encounter in the game, Immortal is full of design choices that aren’t just bad, but obviously bad. Why do the already-annoying hordes of suicide bombers also need to drop clouds of poisonous gas? Why do so many of the bosses heal themselves, spawn trash mobs, or do both? What good is it for foes to have glowing weakspots on their backs when they’re a couple dozen yards away and facing me? And holy hell, what is with the obsession with teleporting enemies?

Although I occasionally admired the way that Immortal’s levels stack and wind – opening a shortcut back to an old save point is always satisfying – each segment is uniquely, memorably terrible. The Cauldrons are a never-ending sequence of narrow cyberpunk walkways that gave me genuine Too Human flashbacks. Beagor cranks the bloom up so high that it’s hard to see anything. The game ends with a freaking portal maze set in a dark environment where everything looks the same. It’s a mess all the way through.

To give credit where it’s due, Immortal occasionally has some striking visual design (particularly when it goes goofy with sci-fi technology) and the lore seems pretty neat. I’m tempted to criticize the ridiculous ending which got an unintended chuckle out of me, but hey, it was arguably the only joy that Immortal provided me, and a welcome moment of levity after Toadman forced me to fight through the same group of snipers and teleporting bastards every single time I wanted to make an attempt at the final boss.

Immortal’s pursuit of the “hardcore” label speaks to a certain presumptiveness in its design – that its impenetrable nature will be offset by a community looking for new challenges to overcome and new mysteries to unravel. Dark Souls got away with that approach because every aspect of it was so meticulously fine-tuned. Immortal’s extreme difficulty only highlights how fundamentally its ideas don’t run together. If there’s anything worse than a bad game, it’s a hostile bad game. Rating: 1.5 out of 10

Disclosures: This game is developed by Toadman Interactive and published by Sold Out. It is currently available on PlayStation 4, Xbox One and PC. This copy of the game was obtained via publisher and reviewed on the PlayStation 4. Approximately 25 hours of play were devoted to the single-player mode, and the game was completed. There are no multiplayer modes.

Parents: According to the ESRB, this game is rated Teen and contains Blood and Violence. Parents shouldn’t be too concerned about the game having a dismemberment mechanic, as the enemy designs are stylized to the point that they’re barely even recognizable as living things and there are no noticeable blood effects accompanying it. The game is full of gun violence, but none of it is graphic or realistic.

Deaf & Hard of Hearing Gamers: Subtitles are available for all dialogue. Text cannot be resized. This is already a very difficult game, and enemies often spawn or attack from offscreen with very little in the way of visual indicators. Immortal is definitely playable without sound, but it will put players at an even greater disadvantage. 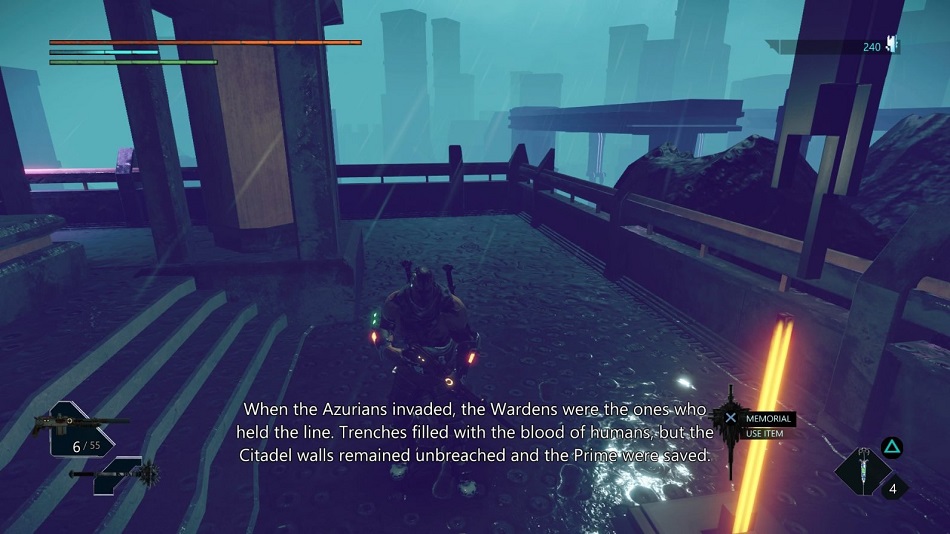 Remappable Controls: No, this game’s controls are not remappable, and the one alternative preset only changes which button is used to sprint. 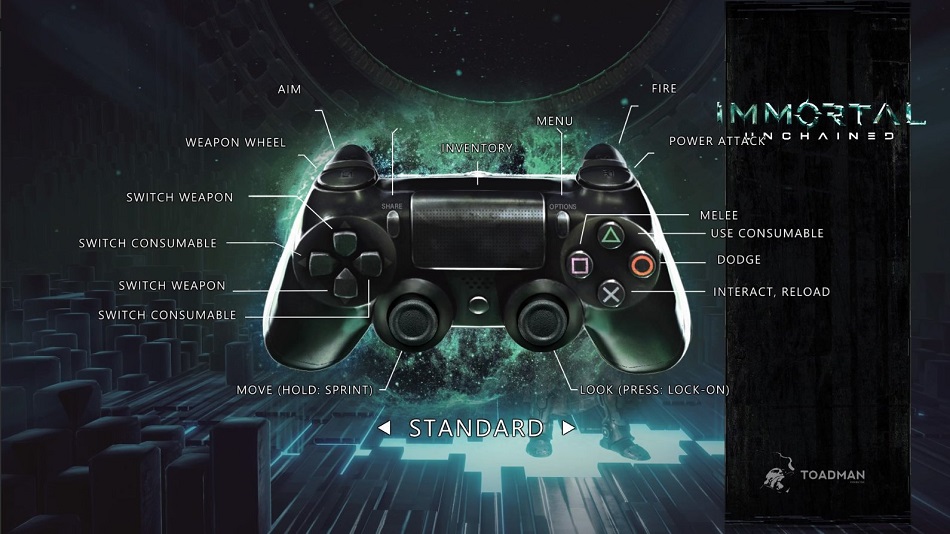 the game is rough around the edges and because of that, it frustrates more than it should / more than it already does.. but aside of some early frustrations, its (alot) better than the reviewer lets on to believe.. like its action & controls, which are actually quite good (not like a full shooter, but if needed can be played as such), its aim-lock on well enough without being too OP but giving the right amount of help and freedom.. and dodging bullets is fun… (just you can get stuck on wired placed edges / corners of the maps) with… Read more »

after getting real deep into the game, it feels more polished the further you get..

this has turned out to be a suprise hit for me