All Bun and Games 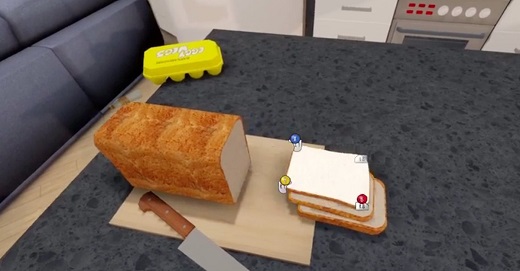 LOW The game crashing while trying to load zero-G mode.

WTF The whole thing, really. It's a game about a slice of bread.

I Am Bread's timing is absolutely exquisite. After being burdened with so many heavy, timing-consuming releases lately, it's relaxing to play a simple physics platformer about a slice of bread that wants to be toasted.

Coming from the same studio that made Surgeon Simulator 2013, it's easy to ascertain that I Am Bread is kind of goofy, and like its spiritual predecessor, it's also anchored by deliberately unwieldy controls that will make or break the experience for everyone who plays it. The game just came out of Early Access, and in some ways, it feels like it still belongs there, but I was taken by its uniqueness and sense of humor regardless.

I Am Bread has players navigating household rooms to look for the means to become toast, and each area is a physics playground full of interactive objects. However, remaining edible is important, so the slice of bread must stay off the floor and avoid picking up dirt, insects or anything else that may make eating it undesirable. Since there's no standard jump function and only a limited amount of time that the bread can grip surfaces without resting, getting across rooms often involves riding skateboards, knocking over books and finding other unconventional solutions.

The biggest hurdle to getting toasted is the controls themselves, which I will now attempt to explain: Each of the controller's four shoulder buttons corresponds to one corner of the slice of bread, and players need to alternate their grips as the bread flips and tumbles about the environment. Simply crossing a flat surface takes work; reaching, climbing and catapulting the bread across gaps are carefully coordinated acts.

For me, this design worked. In fact, some of I Am Bread's particularly difficult navigational puzzles combined with the control scheme vaguely emulate physical exertion—I actually found myself strained and grunting at times!

As bizarre as what I've described might sound, there actually is a plot driving this game. As we wreak havoc in a middle-class household looking for ways to become toasted, the homeowner is gradually driven insane by the notion that a piece of bread is rampaging through his residence. The story is told entirely through his psychiatrist's notes, and while I Am Bread is almost uniformly lighthearted, there's a slightly dark undertone to the realization that our quest to become delicious might be ruining this guy's life.

I Am Bread is only seven levels long, but each can be replayed in a number of optional modes that put new twists on the physics and movement—there's a bagel race, a baguette rampage, and so forth. The results are mixed, but I got a lot of enjoyment out of the zero-gravity mode, which straps a set of thrusters onto the slice of bread and controls alarmingly realistically.

So, Bread is a charmingly enjoyable little game, but the number of grammatical errors and technical issues I encountered give me reason to believe that it wasn't ready to be taken out of Early Access yet. The game crashed more times than I could count, and while I loved the weighty controls, I had an awful lot of collision quirks that resulted in my slice of bread hitting invisible walls or being flung across the level for no reason. The key to a successful physics-based puzzle-platformer is that the physics need to be consistent, and here, they aren't.

It's for these inconsistent physics that I'm not surprised to see such a generally lukewarm reaction to the official release of I Am Bread, but as a fan of both challenging physics platformers and terrible puns, I was still drawn into the game's mechanics, attitude, and replayability. And let's face it: After three straight playthroughs of Bloodborne, traversing a household as a slice of bread is really the only logical next step. Rating: 7.5 out of 10


Disclosures: This game was obtained via publisher and reviewed on the PC. Approximately six hours of play were devoted to the single-player mode, and the game was completed. There are no multiplayer modes.

Parents: As of press time, this game has not been rated by the ESRB. I spotted nothing offensive. It really is just a game about a slice of bread that wants to be toasted.

Deaf & Hard of Hearing: There are no important sound cues and no spoken dialog. No issues here.