It Smells Nice Too 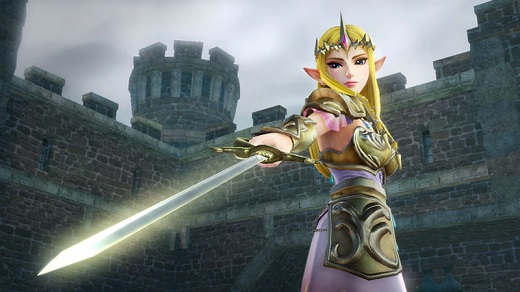 WTF The one big reference to Majora's Mask. Just… wait for it.

As crossovers go, Hyrule Warriors couldn't be more perfect for me.

The appeal of Dynasty Warriors has eluded me even after eight mainline entries, but I couldn't think of a more effective way to spark my interest than to market a spin-off as a fully committed tribute to The Legend of Zelda, my longtime favorite video game series and staple of my upbringing.

To be clear, this is not a Zelda game but a Dynasty Warriors game with Zelda trappings. While that fact will make or break the experience for a player depending on their taste, Omega Force's loving and thorough homHyrule Warriors follows familiar arcs and introduces time travel so its protagonists can visit specific eras, allowing the developers to tap individual games. Ocarina of Time's version of Hyrule gets the spotlight, naturally, but we're also taken to its Twilight years and to the floating islands seen in Skyward Sword.

While the campaign mode itself acts as a sort of ‘greatest hits' collection of Zelda's most popular characters and locales, it's in the presentation and integration of series staples that Omega Force outdoes itself.

The Hyrule font is authentic. The soundtrack playfully remixes tracks that I never suspected would work as shred metal, but do. Pots are smashed and Gold Skulltulas are collected—they even make that familiar scratching noise when they're close. There's even a distinctive correlation in the way new items are unveiled and woven into progression—in the first mission, players are given bombs and then face a remastered King Dodongo; even casual Zelda fans will recognize the significance there.

While the homage is a delight, it'd be a lost cause were I not amenable to the Dynasty Warriors gameplay, which is, of course, nothing like Zelda. Thankfully, if Hyrule Warriors is any indication, I've been missing out all of these years.

Rather than traditional Zelda gameplay, players can expect to take on entire armies by themselves. Missions tend to last around 20 minutes or so, and in that time, I'd average two or three thousand KOs. Most enemies are harmless with the exception of a few tougher opponents, like Darknuts and Lizalfos, sprinkled here and there, but there's something exhilarating about racking up dozens of kills in the span of a single, short combo. It's an enjoyable power fantasy. 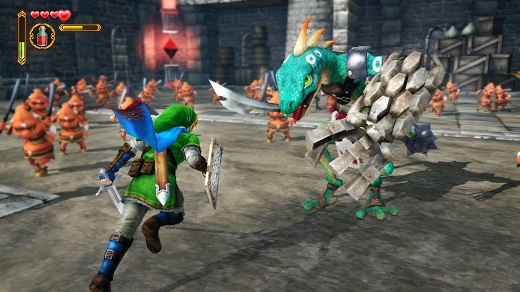 Dynasty Warriors has been famously divisive due to its repetitive nature, and while I think that's totally understandable, I was happy to learn that there's more to this game than simply cutting through waves of enemies. Levels tend to be open-ended and depict ongoing struggles between two or three armies. Players need to be securing bases, aiding teammates and remaining watchful of enemy advances. The combat is simplistic fun, but it's also just a piece of a larger puzzle that's ultimately about territorial control.

Also warding off banality is the fact that each of the game's dozen or so playable characters feel genuinely different. Yes, toying around with some of them is fun for the sheer novelty of it—holy crap! I can play as Zant!—but as the story mode forced me to experiment with different characters, I found myself prioritizing. I grew weary of Ganondorf's need to charge all of his strong attacks, for example, but got a lot of use out of Fi's area-of-effect magic spells. Unlockable weapons expand the playstyles even more, so while the controls are simple and the skill trees are roughly identical between all characters, there's quite a bit of depth here.

Unfortunately, with the Dynasty Warriors series's scope comes its technical limitations. I can tolerate muddy textures and short draw distances if the game can't function otherwise, but I draw the line with the local co-op mode—the framerate frequently tanks to near-unplayable lows. Hyrule Warriors is great, but only as a solo experience.

My other gripe is a more personal one. I realize that Zelda is a sprawling series of games and that some entries are going to get more attention than others in an homage like this, but I find it slightly odd that Skyward Sword—one of the worst entries in the franchise—gets so much screen time when other, more beloved games get the shaft. I'd have loved to see some Termina-themed levels, or perhaps a 3D recreation of Koholint Island, but it wasn't to be. On the other hand, I see that Nintendo has been getting into the DLC game lately, so maybe that's where we can expect this stuff.

Hyrule Warriors may not be an equal-opportunity tribute, but its attention to the fine details that make Zelda unique is so thorough that it's clear to see that the developers are fans themselves. It's one of the most thrilling titles I've played this year, at once an adoring shout-out to the games that dominated my childhood and an introduction to a series that—surprise!—I actually resonate with. It's not a game for everyone, but it was most certainly the game for me. Rating: 8.5 out of 10

Parents: According to the ESRB, this game contains fantasy violence and suggestive themes. One of the female characters wears an outfit with a lot of cleavage. There's a lot of violence, but it's largely on par with the rest of the Zelda games, i.e. cartoonish and bloodless. I don't think there's anything to worry about.

Deaf & Hard of Hearing: In-game dialog isn't even spoken, and most sound cues are accompanied by visual cues, as well. Tracking down Gold Skulltulas would be a bit difficult without being able to hear them, but collecting them is optional.