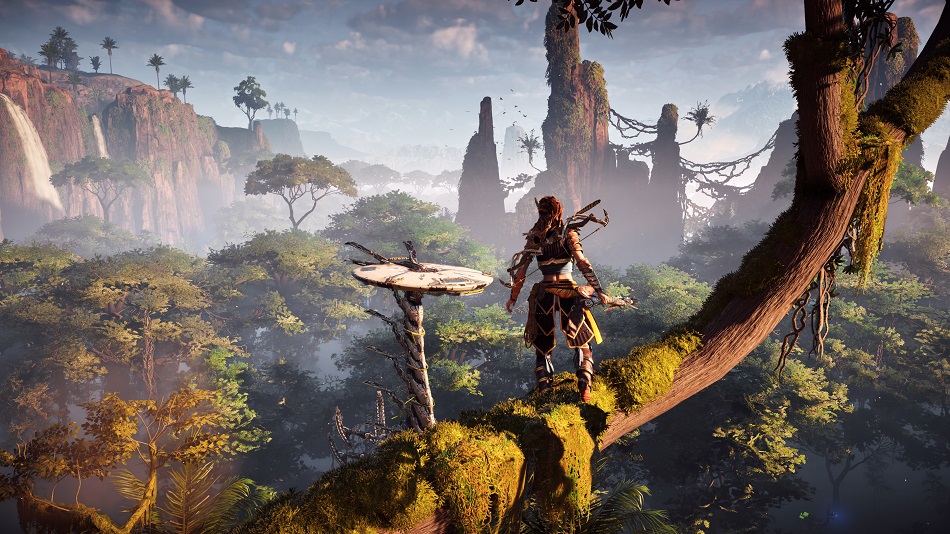 HIGH The first victory against a Thunderjaw.

LOW The final boss is just an upgraded version of one we’ve already fought.

WTF Not that it matters, but the title is absolute nonsense.

Horizon: Zero Dawn was released the same week as a certain other high-profile open-world game in which a bow-wielding savior trudges through a post-apocalyptic landscape, but Horizon has the misfortune of being the one that doesn’t set a new bar for pacing and structure in its genre. It’s a sandbox game with no twists on the actual formula, which is largely why Brad had to call it quits early when he reviewed it.

Fortunately, open-world games can still scratch a particular itch for me, provided they present something fresh to keep me interested while I’m chasing waypoints, gathering herbs and climbing towers. And Horizon’s hook is right there on the cover – it’s a game about using primitive weaponry to hunt enormous robot dinosaurs. Boom, I’m in.

The game is set roughly a thousand years in the future, after some sort of catastrophe destroyed modern civilization. Nature has retaken the planet, humans are now technology-deficient, and mechanical animals roam the wilderness. Our protagonist is Aloy, a young woman raised as an outcast because the mysterious circumstances of her birth have led her tribe to believe she’s some sort of omen. Her initially-personal journey to discover her identity leads her down a broader path into uncovering the mysteries of the old world.

Well, I say “mysteries,” but anyone well-versed in sci-fi will probably see a lot of what’s coming before Aloy does. It’ll be no surprise, for example, that an automated defense system went berserk at some point, or that a rogue AI is involved.

Having said that, I became surprisingly invested in Horizon’s lore, largely due to how detailed and well-thought-out it all is. The writers have actually come up with satisfying answers for questions that logically shouldn’t have them, like why some robots have taken the form of day-to-day wildlife (horses, deer, etc.), or why humanity as we see it has no knowledge or understanding of the ruined world. Even the explanation for Aloy being the “chosen one,” the only person who can solve the world’s crises, makes complete sense.

I have to imagine that Horizon began with the empowering image of a primitive woman taking down a mechanical T-rex with nothing but a bow, and it was up to the writers to contrive a setting in which this could actually happen, so hats off to them for stepping up to the challenge. And, since post-apocalyptic hellscapes are something to be taken for granted in today’s industry, good on Horizon for restoring some tragedy and poignancy to this concept by giving names and faces to the members of the fallen world. The final scene before the credits is a particularly powerful example of this. 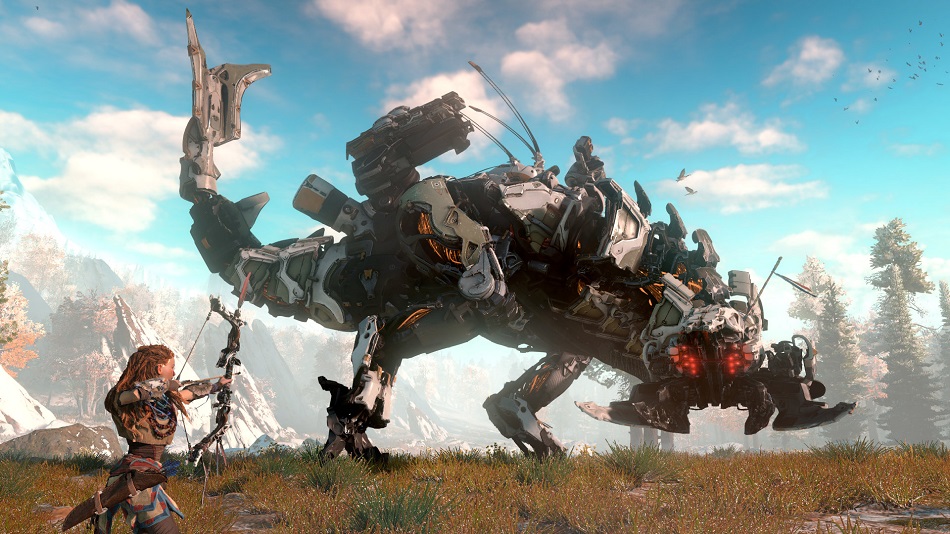 However, for as pleasantly surprised as I was by the story, it plays second fiddle to Horizon’s real draw — using crude weapons to battle enormous robots. There are a couple dozen enemy types, and while early encounters can be cleared with a single well-placed arrow, later machines are more like mini-bosses, with components to be shot off and fuel tanks to be ignited. Tough fights are only won with a keen understanding of which damage types to use and which parts to aim for. Taking down a larger machine involves not just lobbing projectiles in its direction, but actually disarming and gutting it.

One of Brad’s big criticisms was that enemies often appeared in unfairly large groups, turning battles into messy stampedes. Personally, I didn’t have that experience as long as I was careful and patient. Stealth is a viable option in Horizon, and silent executions are one of the first skills players will unlock. Between that and the ability to lay traps along the machines’ patrol routes (which can be revealed with a simple scan), I usually found it easy to thin the herds before the action heats up. Hell, Aloy eventually gets the ability to outright override certain robots, forcing them to fight on her side.

I’ll also add that Horizon has the rare skill tree that fundamentally changes how players are able to approach situations. Triggering slow-motion at various points, running silently, locking multiple arrows at once… these are abilities that substantially broaden my options. As the battles became tougher, so did I.

Oddly, in this robot dinosaur game, fighting run-of-the-mill humans is nearly as rewarding, mainly because it’s the sort of stealth play I’ve been wanting to see from the new Tomb Raider games. There’s something appealing about sneaking through enemy bases as an under-resourced predator, crouching in the bushes and quietly putting arrows through bandit skulls. The viability of Horizon’s stealth aspect makes up for the simplicity of its melee combat, which I only ever used as a last resort.

Having said all of that, Horizon still bows to genre convention in a number of areas, and being released the same week as the new Zelda doesn’t help. Breath of the Wild’s climbing mechanic is going to make every other open-world game feel like an invisible wall jamboree by comparison, and sure enough, Aloy’s traversal prowess is aggravatingly limited. This is supposed to be someone raised to survive in the wild, yet I could easily climb obstacles in real life that she can’t, and I sit in front of my computer eating Fritos all day.

Also in the realm of unfavorable comparisons to Zelda, it’s jarring to return to the self-serious tone typical of most triple-A games not developed by Nintendo. None of Horizon’s stiff characters are likeable or relatable, and I grew frustrated every time the game pulled me away from the sci-fi intrigue to deal with their problems. The overarching story is solid, but the moment-to-moment dialogue could have used more personality.

While I do think that Horizon falls just short of greatness, it’s a lengthy and astonishingly beautiful game that offers more than enough detailed world-building and exciting combat to carry the more mundane design choices. So rest easy, internet – someone on GameCritics likes Horizon. Now please cut Brad down from that noose. Rating: 8 out of 10

Disclosures: This game is developed by Guerrilla Games and published by Sony Interactive Entertainment. It is currently available on PlayStation 4. This copy of the game was obtained via retail store and reviewed on the PlayStation 4. Approximately 39 hours of play were devoted to the single-player mode, and the game was completed. There are no multiplayer modes.