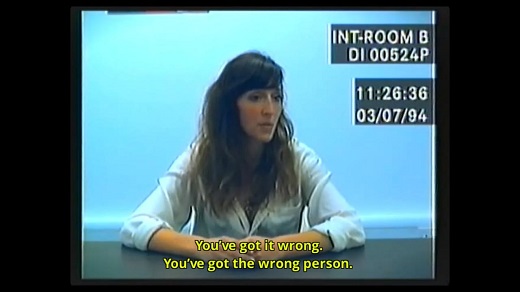 HIGH Discovering that the background apps can be opened.

LOW I get that this actress is also a singer, but that musical interlude is a bit long-winded.

Her Story has been lauded as an FMV game that breaks the constraints of traditional narrative. That's certainly true, but in eschewing the classic three-act structure, its plot feels perpetually stuck in its first act, all exposition and buildup with nowhere to go. It's a bold game, but I admire it more as an experiment than as a fully-formed story.

It's framed as an archaic computer archive being used to access interviews with a woman shortly after the death of her husband, which may have been a murder. We'll call her Eve, though that's not the only name she goes by.

To provide any specifics would likely qualify as spoilers, but the seven interviews (cut into hundreds of clips, many of which are only a few seconds long) delve into important details about Eve's twisted personal history, her relationship with her husband, and the circumstances that led to his demise.

Players can search the clips using specific words spoken by Eve, but for reasons no less arbitrary than "because it's a video game," only the first five results for each word can be viewed. So the "game" is in carefully listening to Eve's dialog for key terms, narrowing the search, and eventually forming a larger picture of the story by following the trail of clues through the videos.

Is there an objective or endgame to this? Sort of. Without ruining anything, when players view a certain number of clips, they're provided some important information as to who exactly is doing these searches, given a couple of cheats for more rapidly viewing the remaining videos, and then told to continue browsing until they're satisfied with what they've seen.

That is, unfortunately, as much of an arc as Her Story can provide. Since any clip can theoretically be accessed at any time, they needed to be written and shot in such a manner so that they make sense no matter what order they're viewed in. As a result, it's not a story so much as an assortment of character development and flavor text. Much of it is interesting, certainly, but it's delivered without a rising or falling action. Having watched every single clip, I can confirm that there's no real "conclusion," no single detail or explanation tying it all together. Players are asked to gather information about this woman and essentially write their own endings.

I know that some people have enjoyed sharing theories about how the images conveyed through Eve's interviews—her childhood memories, the people in her life, her accounts of events leading up to the death—form a cohesive whole, but personally, I was never intrigued enough by this woman's life to feel satisfied in sifting through hours of her anecdotes with no concrete answers. And, while lead actress Viva Seifert acquits herself well at a glance, her high-strung, overly excitable portrayal of Eve becomes exhausting after a while. I don't envy her for being the game's sole focal point, but still.

I'm always eager to see developers carve new territory in interactive narrative, but I'm not convinced that Her Story's format of chopping up bits of exposition and hiding them behind a nonsensical search engine mechanic is a major step forward for the medium. There's enough solid standalone writing to prevent it from being a waste of time, but I ultimately value Her Story more for its audacity than its success. Rating: 6.0 out of 10


Disclosures: This game was obtained via retail and reviewed on the PC. Approximately three hours of play were devoted to the single-player mode, and the game was completed. There are no the multiplayer modes.

Parents: As of press time, this game has not been rated by the ESRB. Plenty of F-bombs are dropped, and sexual activity is discussed in moderate detail a couple of times, but there's no graphic content in the game whatsoever, since it's composed entirely of interview clips. Should be fine for teens.

Deaf & Hard of Hearing: Subtitles are available for all dialog.