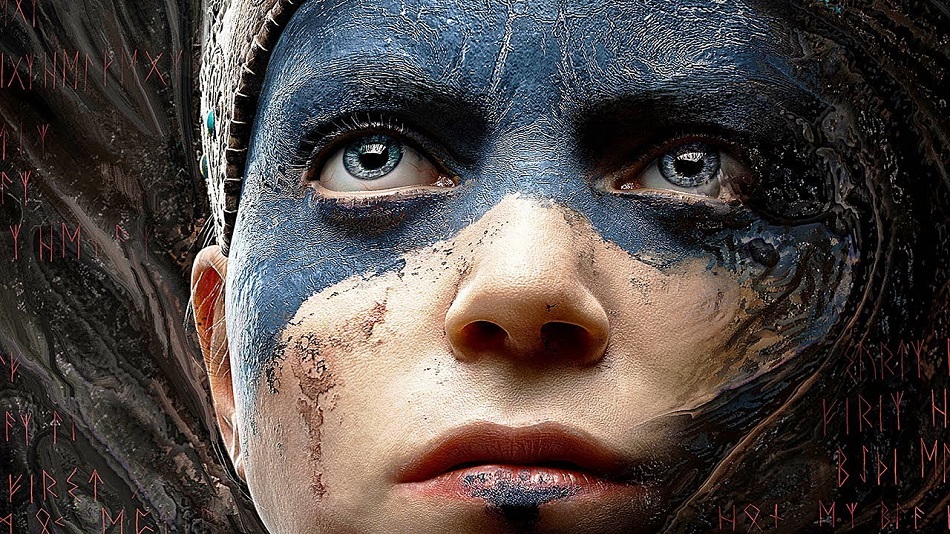 HIGH The game’s incredible use of binaural sound.

WTF Norse mythology looked much different in Too Human.

In a perfect world, I’d say that Hellblade: Senua’s Sacrifice is one of the most important games of the year, everyone would take my word for it, and I wouldn’t have to discuss the scene in Hellblade that made headlines this past week – no more than a half hour into the game, players are clearly told that if they die too many times, their save file will be erased.

This prompted some initial controversy, followed by careful investigation into whether the statement is true or a bluff. The risk of permadeath would admittedly be an odd thing for a developer to lie about, as it would place a lot of unwarranted stress on players. But while there is a definitive answer to this question, I’m not going to say which it is. Not being able to discern whether or not a threat is real is something of a running theme in Hellblade.

That’s because, in consulting with both experts and patients, Ninja Theory’s mission with Hellblade is to portray mental illness in the most authentic manner possible. They put us into the mind of the afflicted character and dare us to share her confusion and uncertainty. It’s the rare game that has no intention of being “entertaining” in the traditional sense. Its goal is not to exhilarate or empower us, but to baffle us, wear us down, and beat our senses in.

Set in a fantastical Viking age, Hellblade centers on a protagonist named Senua who’s stricken with “the darkness” – an unsubtle stand-in for psychosis. While her basic objective is to confront the goddess Hela and resurrect a loved one, her real struggle is internal, as she battles the demons that are eating away at her state of being. We begin with zero backstory, and are only afforded pieces of the puzzle as Senua flits randomly through her memories in an effort to retain her identity. That’s the symbolic nature of the permadeath threat – every time she falls, Senua is one step closer to losing herself.

The literal voices in Senua’s head are Hellblade’s most immediate effort to put us in her shoes. Their chatter is near-constant throughout the game and never helpful, often drowning out important plot-related dialog. With headphones on – don’t bother playing Hellblade any other way – the game’s brilliant use of binaural 3D sound gives the impression that the player is surrounded by people, at varying distances, incessantly bickering amongst themselves. It’s a chilling and highly convincing effect. 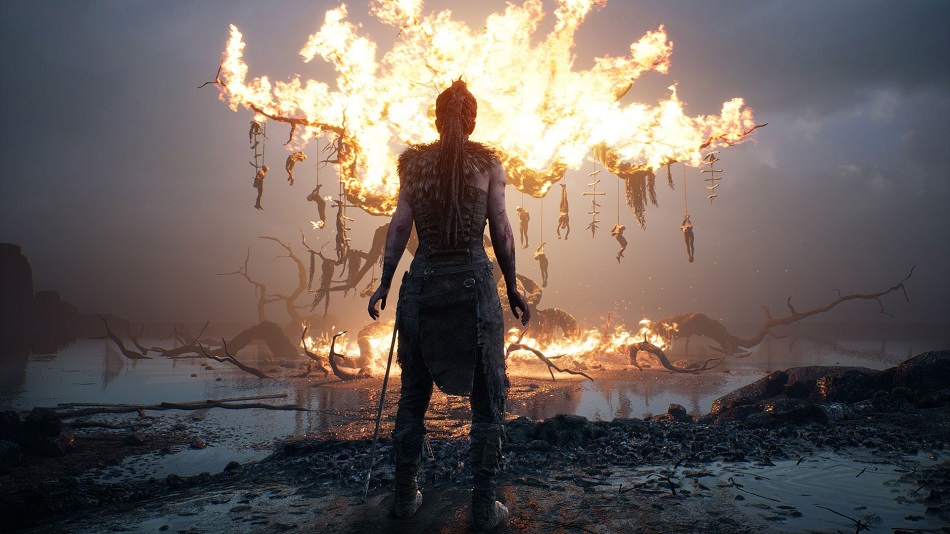 Even more convincing is Senua herself. This team is renowned for its motion capture work, having collaborated with one of Hollywood’s foremost experts, Andy Serkis, on two separate titles. They have ample opportunities to show off their prowess here. Since Senua is often conversing with people who aren’t real, Ninja Theory often situates the camera right in front of her face for long, unbroken takes, and the tics in actress Melina Juergens’s performance are vividly realized. Though Senua doesn’t talk much, every furrowed brow and twitch of the eyelid puts us more in tune with her emotions than words could. It’s a staggering portrayal.

The final step to bringing us into Senua’s world is the game itself, which deliberately isn’t enjoyable. Our quest to Helheim manifests as a series of arbitrary trials, in which the world doesn’t seem to abide by a consistent set of rules and Senua is often on the run from thinly-defined (but nevertheless lethal) threats. One stealth sequence actually attempts to emulate blindness, forcing players to use senses other than sight to navigate wherever they are, avoiding whatever is hunting them.

The two mainstays of Hellblade’s gameplay are forced perspective puzzles and arena-based combat challenges. The former asks players to detect “runes” within the environment by viewing objects from specific angles. They’re clever at first, but ultimately perfunctory. The combat is the source of many frustrations — simplistic to a fault, it never evolves as the story pushes forward, and the over-the-shoulder camera angle is too tight on Senua to ever feel comfortable. Enemy variety is slim, and some of the encounters drag on for so long that I often wondered if I was doing something wrong.

And that’s the point. While these designs would be gaping flaws in another title, here they tie into Senua’s struggle to find cohesion and escape from the dark place in which she’s trapped. Even the unpleasant visual design is playing along with Hellblade’s bleak, oppressive nature. Norse mythology is usually portrayed in videogames with elegance and majesty. Here, it’s primal and ugly — a jagged world made of sticks and mud, where corpses are displayed around every corner. This is a place that players should be desperate to get out of.

It takes guts for a game developer to deliberately forgo traditional entertainment value in order to make a broader point, and the big question hanging over the entirety of Hellblade is whether or not the struggle is worth it. When a work’s entire hook is that it blurs the line between what’s real and what isn’t, it risks devolving into formless nonsense. Hellblade avoids that route (even when it often seems like it won’t) and to explain why would spoil its greatest surprises. All I can say is that if someone offered me a million dollars to write a more perfect conclusion to this story than what Ninja Theory came up with, I couldn’t do it.

Hellblade is one of the game industry’s few genuine dramas – a dark, uncomfortable experience that makes players suffer alongside its protagonist. By intentionally avoiding the standard power fantasy in their designs, Ninja Theory has shined a light on mental illness, an important subject that many people are ill-informed about, and they’ve portrayed it in an immersive manner that no other storytelling medium could. For those up to the challenge, it’s a must-play, and one of the boldest and most important artistic endeavors games have seen in quite some time. Rating: 9.5 out of 10

Disclosures: This game is developed and published by Ninja Theory. It is currently available on PlayStation 4 and PC. This copy of the game was obtained via paid download and reviewed on the PC. Approximately seven hours of play were devoted to the single-player mode, and the game was completed. There are no multiplayer modes.

Parents: According to the ESRB, this game is rated Mature and contains intense violence, blood and gore, nudity and strong language. This game is graphic, scary, thematically heavy, and completely inappropriate for children.

Deaf & Hard of Hearing Gamers: Although subtitles are available, audio plays a major role in the game’s presentation and atmosphere, and being able to hear cues is outright necessary in order to complete certain sections. Hellblade, unfortunately, cannot be played without sound. This game is not accessible.

Great review! I read it after completing the game and I can only agree with what’s being said.

I immediately turned down the fighting difficulty to easy in options, as that is not where the enjoyment of this game is at. Almost wish they would do a story-only mode where the fighting were replaced with short cut-scenes.

I was looking forward to it, but now that it got so much praise I don’t want to play it because I’m afraid I’ll be disappointed if it’s not the experience of a lifetime 🙁 Also, having a hearing disability this might be difficult for me to play.