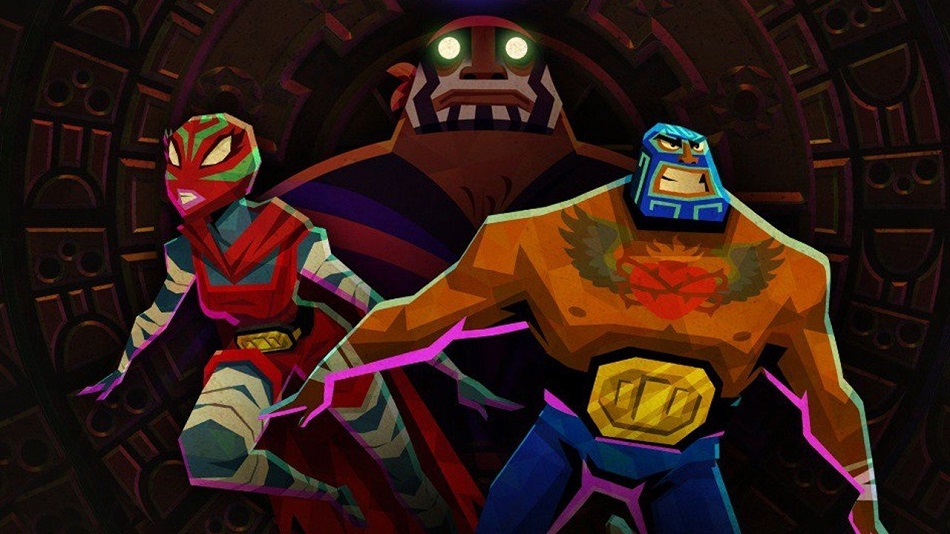 HIGH Going on rampages as the giant chicken.

LOW The final dungeon feels like it goes on forever.

There’s usually a moment at the beginning of a Metroid game in which Samus loses all of her hard-earned equipment from the previous adventure, giving players an excuse to have to go find it all again. The Guacamelee! series doesn’t hide that it owes a lot to Metroid, extending far beyond the fact that players obtain new upgrades from – I’m not kidding here – “Choozo Statues.” So for all I know, the fact that protagonist Juan spends most of Guacamelee! 2 re-learning all of the same abilities as the first game could be an elaborate joke.

That’s probably me giving the game too much credit, though. Guacamelee! 2 is simply the first DrinkBox Studios game that one could describe as “predictable,” and the sort of sequel that wallows in its predecessors’ successes without pushing the envelope any further.

For those unaware, the original Guacamelee! was a 2D metroidvania set in Mexico, blending a robust physical combat system with some of the most devilish platforming challenges I’ve ever been faced with. For more detail, read Brad Gallaway’s glowing review of it here. 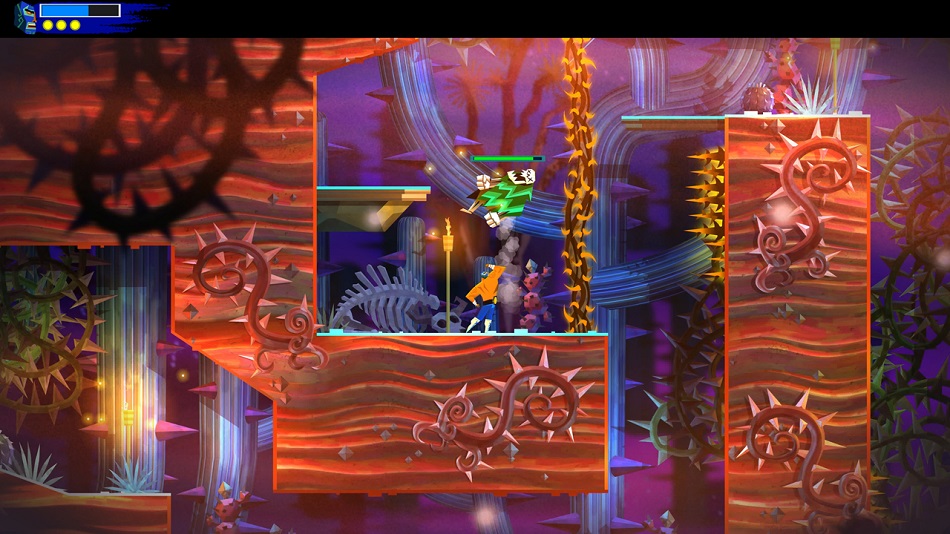 Guacamelee! 2 offers more of the same, but with less reward – it’s not as invigorating to master these moves after already mastering them last time. Most of the improvements have been to the combat. While Juan’s moveset is largely the same, he has an RPG-lite upgrade system that primarily makes his attacks more powerful, and his chicken form – previously only used to navigating small spaces, à la the Morph Ball – can now be used to fight.

I haven’t played the original Guacamelee! since its release, so for all I know, this sequel is perfectly consistent in quality and the formula just doesn’t hold up. However, something I’ve noticed in 2018 (after five years of metroidvanias having overpopulated the indie market) is how inorganic Guacamelee! 2 feels as an exploration-based title. Most of the abilities that expand Juan’s navigation are color-coded, and it feels static and arbitrary to simply wall off parts of a level with red or green blocks to mark how far I’m allowed to go.

This artificiality also deflates the excitement of giving the chicken fighting moves, because they’re mostly used to smash through purple and orange blocks. For those keeping track, that’s a whole two more block colors this time around. 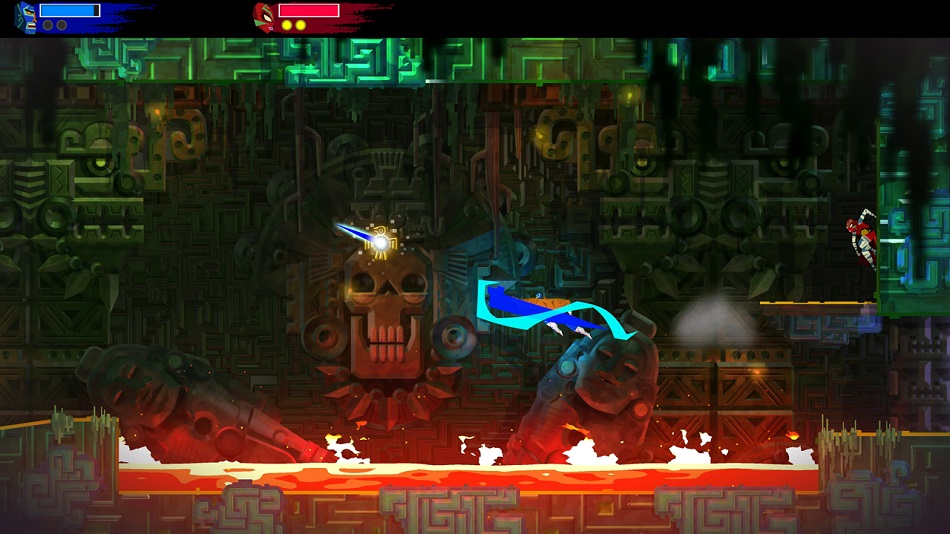 DrinkBox’s signature bright, exaggerated visual style is on full display and as striking as ever, though in this case it’s so overdone that it detracts from the functionality of the environments. Guacamelee! 2 has such a consistently busy look to it that none of its levels feel like places, so my efforts to visualize specific regions only manifest as a big blur. The entire campaign is just a set of oversaturated corridors with no reason for actually being there except to put us through now-familiar motions.

One aspect of Guacamelee! that definitely hasn’t aged well is its sense of humor. I was totally onboard when DrinkBox took on a darker, more twisted tone with Severed (which I loved, unlike Brad), so it’s disappointing to see them regress back into tired meme usage and punchline-free references to other videogames. There’s even a Dark Souls callout so trite that this isn’t even the first game I’ve played this year to make the exact same joke.

Worst of all, Guacamelee! 2’s penchant for self-deprecating humor often functions as an acknowledgement and dismissal of its own issues. Why yes, it is awfully convenient that I’ve suddenly been pulled into an alternate timeline in which I must save the world in roughly the same manner as my last go, but no, Guacamelee! 2 doesn’t stop being an uncharacteristically halfhearted rehash just because the writers scored a few easy laughs from it. Rating: 5.5 out of 10

Disclosures: This game is developed and published by DrinkBox Studios. It is currently available on PlayStation 4 and PC. This copy of the game was obtained via publisher and reviewed on the PlayStation 4. Approximately 11 hours of play were devoted to the single-player mode, and the game was completed. 30 minutes of play were spent playing cooperatively.

Parents: According to the ESRB, this game is rated E10+ and contains Fantasy Violence, Mild Language and Alcohol Reference. It’s all very cartoonish and not remotely objectionable.

Deaf & Hard of Hearing Gamers: All dialogue is text-based, and audio cues play no vital role in the game. It’s fully accessible. 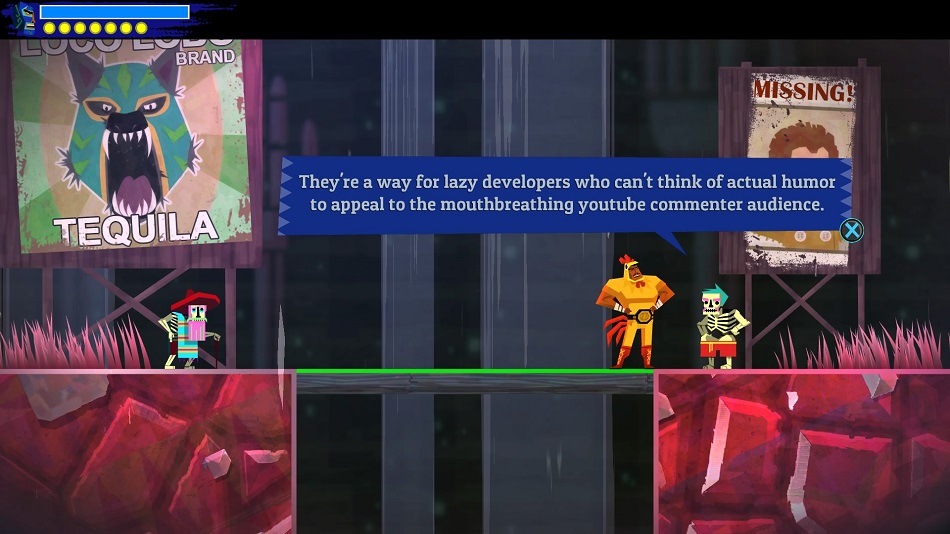 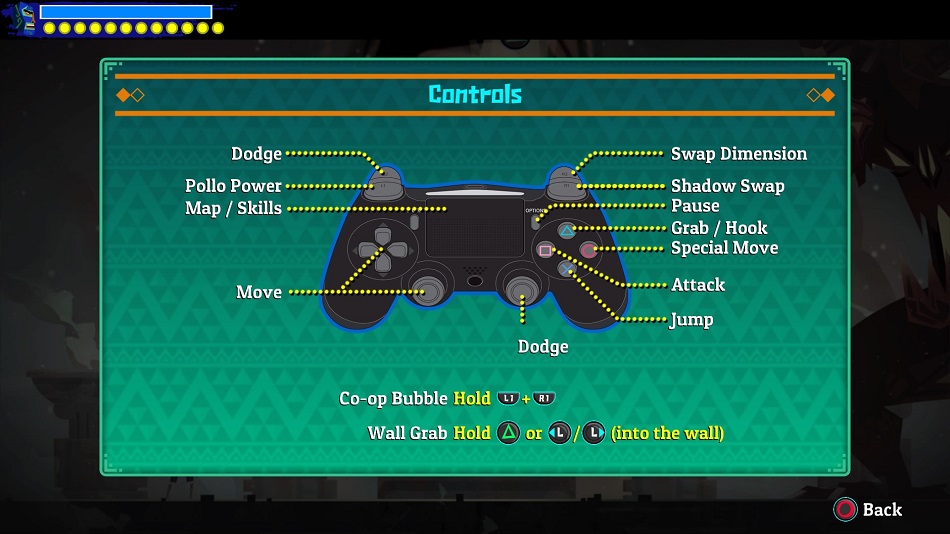 Yeah, it’s hard to recommend this game to people who’ve played the first. If you liked the first, well, here’s more of pretty much the exact same thing.