A Garden of Whimsy 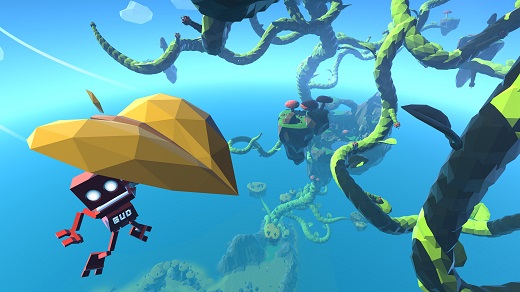 WTF This came from Ubisoft. Ubisoft.

There's a lot of climbing in Grow Home, and that's the only resemblance it bears to anything else that Ubisoft has released lately.

Developed in Unity and sporting the look and feel of a project driven by a small team of people doing more with less and pursuing a unique vision despite budgetary constraints, nothing about Grow Home hints at the backing of a notorious AAA publisher. That it is awash with charm and original ideas is also uncharacteristic.

I don't know why Ubisoft fronted this game, but I'm grateful that they did.

Grow Home is a rather silly platformer/physics showcase in which players control a robot named BUD who's been tasked with growing and studying a massive beanstalk. The plant begins as a seedling and eventually scratches the stratosphere, and BUD tends to this process by climbing the stalk and feeding it energy found amongst the many floating islands dotting the sky.

While I've heard interesting interpretations of Grow Home's story, I don't see much to this setup beyond what's on the surface, but that's okay. The game's pleasures are simple but sharp.

The most immediately striking thing about Grow Home is its incredible sense of scope. Since the whole game is set in a single, massive, vertically-aligned level, I was able to look down at any time, see all of the places I'd been, and get a good sense of just how long the journey I'd made was. By the end, I was miles high and getting constant visual reinforcement of that.

Since climbing is the only real objective in Grow Home, it makes sense that the climbing mechanic itself takes some getting used to. BUD's arms are individually controlled by each of the triggers on a controller, so scaling vertical surfaces involves rhythmic back-and-forth work.

BUD himself is a curious marvel of physics, because most of his animations are procedurally generated. His limbs move independently of one another and react to both momentum and whatever objects they come into contact with. Successfully navigating requires constant awareness of where his body parts are going to land and what they're going to do. There's more to it than simply pointing an analog stick in the desired direction, and it also results in some amusing, spontaneous gyrations on BUD's part.

There's also a strong collection element to Grow Home, since finding crystals boosts BUD's navigation skills. It's not required, but how much players gel with this particular aspect of the game will probably gauge how much they enjoy Grow Home as a whole. It's an easy game to speed through, since expanding the beanstalk is a simple matter of steering its limbs into plainly-visible glowing rocks. However, I was so taken with the physics and the controls that I was actively looking for more reasons to engage in them. Grow Home is a world that I wanted to explore.

Of course, the lovely audiovisual presentation helps that appeal. Grow Home has the low-polygon-count look of some of the earliest 3D video games, but with the crispness, smoothness, and clarity of something modern. The world is expansive and detailed despite its simple aesthetic, full of little toys and gizmos that can be grabbed, pushed around and bent under BUD's weight. There's also a sense of humor in the bizarre art style, but it's understated and charming.

Speaking of charm, that characteristic is Grow Home's claim to fame. It's delightful to look at and even more delightful to explore. If Ubisoft wants to restore some goodwill with core audiences again, releasing lovely little titles like this is a step in the right direction. Rating: 8.5 out of 10


Disclosures: This game was obtained via retail and reviewed on the PC. Approximately four hours of play were devoted to the single-player mode, and the game was completed. There are no the multiplayer modes.

Parents: As of press time, this game has not been rated by the ESRB. There's nothing even remotely offensive about this game. It's squeaky clean.

Deaf & Hard of Hearing: All dialog is restricted to text. Sound cues can help when hunting for crystals, but it's not an essential part of the game.

Great review, Mike. I agree with everything you’ve said. This is a game that I’ve lost hours to exploring as much as I can, and just having fun with the environment. Hell, even when I fell and lost 10-15 minutes of progress it didn’t bother me much because that meant another chance to get back up there by a different means and uncover new secrets.