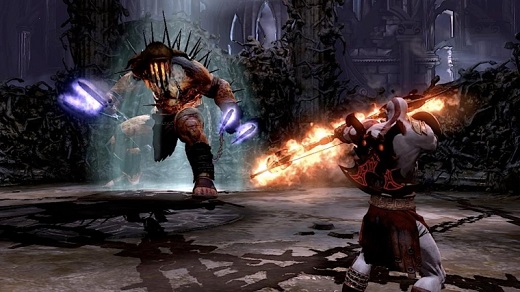 WTF Why does Kratos suddenly care about Pandora?

Kratos has never exactly been a sympathetic character, but the original God of War portrayed him as something of a tragic figure, his torment partly the result of his own bloodlust. It's certainly cause for a person to confront their own destructive nature when they accidentally murder their own family.

Despite this, Kratos seems to have gotten over things by the third entry, which sees him wantonly slaughtering pretty much every character who survived the first two games. As further proof, there's frequent suggestion that Kratos's actions are dooming the entire human race, what with the world plunging into famine and disease as the gods who are keeping things together die. He seems relatively cool with this.

I assume that Sony's primary reason for rereleasing God of War III was to make the game available to new audiences, so it's weird that they've done nothing to contextualize Kratos's motivations or refresh us on what exactly Zeus could have done to make the condemnation of the entire human species acceptable.

Story aside, God of War has always been a power fantasy, and Santa Monica Studios's struggle to continually raise the stakes has resulted in a game that's as exhilarating as it is gross—though to be fair, this stuff was incredible five years ago. The opening level depicting Kratos battling Poseidon on the body of a moving titan as it ascends Mount Olympus set a new precedent for scale in big-budget action games.

The campaign also has impressively little downtime, and never seems to run out of extravagantly-designed sets and grandiose combat scenarios. Even a run-of-the-mill scuffle with a handful of armored goons can be set against the magnificent sight of a god and a titan fighting to the death in the background, for no reason other than to illustrate that the player is involved in major events.

Yet whenever the characters begin talking, suddenly it all feels so petty, melodramatic and hackneyed. The script is self-serious and utterly devoid of irony, yet delivered as if the actors believed they were reciting Shakespeare. Kratos's dialog is juvenile and overplayed to the point that I'm almost tempted to read it as self-parody. Unfortunately, during God of War III's torturously drawn-out finale, we're asked to reflect on the handful of deaths that Kratos actually feels guilty about, but never on the countless lives we're ending by essentially destroying the world for thinly-justified reasons.

At least the first God of War counterweighed Kratos's inherent wickedness by pitting him against an even bigger bastard, but his narrow-minded crusade of revenge in the third entry leaves me puzzling to recall why most of these people even deserve it. Without the other titles in the series accompanying this rerelease, doing some research online is the only way to fill in the narrative holes.

While it's odd as a solo release, God of War III Remastered does succeed in being an excellent reissue. With an enhanced resolution and silky smooth framerate, this rendition now looks on par with most current-gen titles. Between this and The Last of Us, I won't take issue with Sony rereleasing their major PS3 games, so long as the rereleases are of such consistently high quality.

The question of technical quality is easily addressed here, but the bigger question is whether or not God of War III deserves to be brought back into the spotlight, and whether such a witless, weightless celebration of ultraviolence works as well today as it did five years ago. To me, it says a lot about God of War III's dreadful story that the game can be so well-paced and exciting, and yet still leave me ambivalent about having played it. Rating: 6.5 out of 10


Disclosures: This game was obtained via publisher and reviewed on the PC. Approximately eight hours of play were devoted to the single-player mode, and the game was completed. There are no multiplayer modes.

Parents: According to the ESRB, this game contains: blood and gore, intense violence, nudity, strong language and strong sexual content. Uh, I don't know what more you need to hear.

Deaf & Hard of Hearing: Subtitles are available for all dialog, and I didn't notice sound playing a key role in the game in any way.