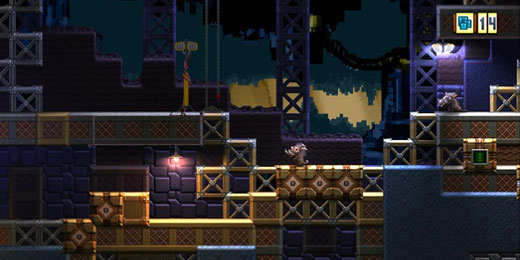 LOW Stepping a space too far, falling to the bottom of the area and having to climb all the way back up.

The supposed selling point of Full Bore: The First Dig is that it's an open-world puzzle game, and I wouldn't have seen the flaw in that concept before I'd actually played it.

The main character is a young "digging boar"—Frederick in my case, though the player can also choose a female boar named Hildi—who accidentally stumbles into a hog-filled mine, getting chewed out by a bigwig behind a desk before being forced to work for the company in order to buy his way out.

The mine itself is clearly built with games like Metroid in mind, full of branching paths and hidden nooks. It's a design principle that's worked for plenty of 2D games in the past. The trouble is that a focus on exploration only works when exploring isn't a hassle. In Full Bore, it is.

The central mechanic has the player digging through blocks of various materials: dirt, sand, stone, and more. Each block type has a different physical property-one breaks easily, another falls when unsupported, another can be destroyed in large quantities by performing a simple stomp, and so on.

Making progress in Full Bore involves understanding how the various blocks can be manipulated, and then clearing or repositioning them in such a way so that the player is able to come out the other end. It's easy to stumble into a dead end by destroying the wrong block at the wrong time, but the game emphasizes careful consideration before action.

This seems like a decent setup for a linear puzzler, but not an open-ended one.

Full Bore presents the player with a relatively massive environment and little clear direction. I wandered about hoping to stumble upon objectives or NPCs, and this would have been fine if the game wasn't a chore to navigate. Since this isn't a platformer, Frederick can't jump and can't be steered while falling. The simple act of climbing stairs often feels like hard work, and the need to slowly and delicately rearrange blocks to get anywhere makes Full Bore move at a glacial pace.

Not helping is the fact that so many of Full Bore's puzzles feel like dead ends, since they're inconsequential to overall progress, and exist only to award collectibles that don't seem to have any purpose. "Open-world" is one thing, but this just feels aimless.

Full Bore's rather bare-bones and indistinct visual style isn't an asset, either. Some of the character animations are admittedly adorable—I loved how Frederick would goofily bang his head against objects that he couldn't burrow through—but the mine itself is a static collection of blocks and crates colored in drab browns, greys and purples. This isn't the kind of place that I want to invest in, and it's certainly not worth laboriously trudging through. The music is absolutely grating, as well.

Some of the puzzle design is solid enough that I could easily have pictured Full Bore working as a more linear game. As it is, it's dull and frustratingly misguided, and there are too many low-budget indie puzzlers in the market for one like this to stand out. Rating: 5.0 out of 10

Editor's note: This review was based on Part 1 of the game, released in October. A revised version including Part 2 and a new 'rewind' feature will be released on Steam in May.

Disclosures: This game was obtained via publisher and reviewed on the PC. Approximately five hours of play were devoted to the single-player mode, and the game was not completed. There are no multiplayer modes.

Parents: As of press time this game has not been rated by the ESRB. One of the characters smokes a cigar. By my observation, that's about as objectionable as the game gets. It's cute and inoffensive.