At Least There’s No Tower Climbing 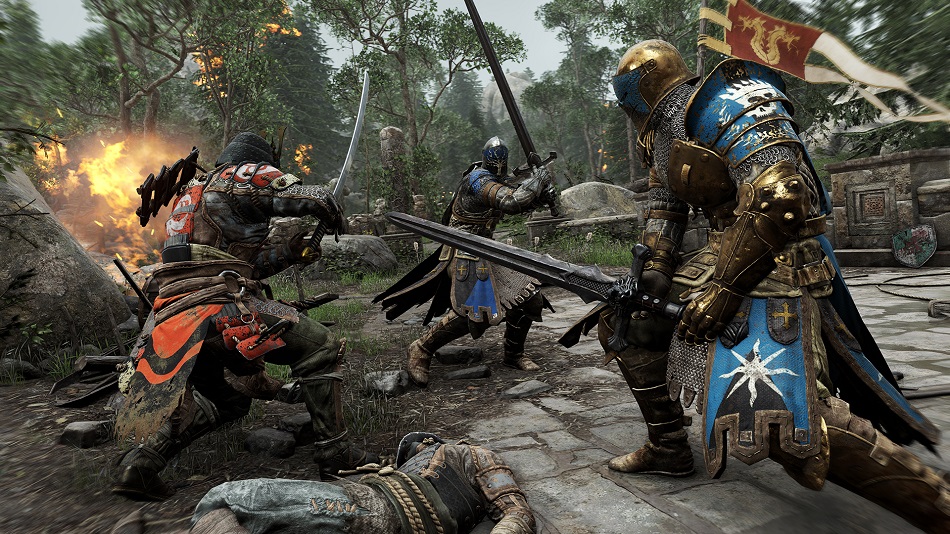 HIGH A duel against a player of equal skill level.

LOW What passes for a single-player campaign.

WTF “You cannot join this session because it is full.” Then why did you put me there, game?!

I toyed around with For Honor several times in beta form before its official release and consistently fell in love with it. It’s got some of the best melee combat I’ve ever experienced, and the lavishly detailed character designs and environments drape a cloak of authenticity over whatever absurd premise allows knights, Vikings and samurai to battle in the same arena. Unique and unabashedly hardcore, For Honor had the ingredients to make major waves as the next multiplayer phenomenon.

Now that I have the finished game in my hands, I’m singing a considerably different tune. I cling to the aging philosophy that when I pay sixty dollars for a game, I expect sixty dollars’ worth of content, and I’ll never accept that microtransactions are a necessary evil no matter how many times that message is battered into my head. With For Honor, I made one payment only to be immediately be confronted with a number of other things I could spend more money on, up to and including – yeesh – a forty-dollar season pass.

As a free demo, For Honor is brilliant. As a full-priced release, it is undeniably lacking.

It sure has the basic mechanics down, though. What Ubisoft has essentially done here is build a fighting game engine without the dial-a-combo technical overdose that typically scares me away from that genre. For Honor is essentially a fencing game in that it’s more about footwork and reading the opponent than full-on offense. When a duel is formally engaged with another player, the right analog stick is used both to attack and block from three different directions – left, right, and overhead. While each of the game’s twelve characters sports a unique set of attacks and maneuvers, the same basic tug-of-war is always at play no matter who’s fighting who.

What’s great is that there’s just enough variety between the twelve classes of knights, Vikings and samurai. They’re grouped into the usual flavors of tank, defense and scout, and players can carve out their own style while adhering to the same universal rules. Tides can sway in a matter of seconds as players learn their opponents’ patterns – anyone fighting my Orochi, for example, may pick up on the fact that I usually follow my Storm Rush with an overhead strike, and countering that will make me vulnerable. It’s absolutely exhilarating to be matched against someone of my own skill level. The combat’s such a triumph that For Honor is solid entertainment even in the modes where it pits players directly against one another with no other objectives.

The game’s star attraction, however, is Dominion – a king-of-the-hill variant that has teams of four battling for control over beautifully designed castles and forts. To make things more interesting, two full armies are constantly battling for each map’s middle point, which brings some Dynasty Warriors into the mix as players cut down hordes of cannon-fodder minions in an attempt to turn the tide. Most of the action is still between players, however, and this mode is a terrific showcase for the fighting system beyond simple one-on-one duels. 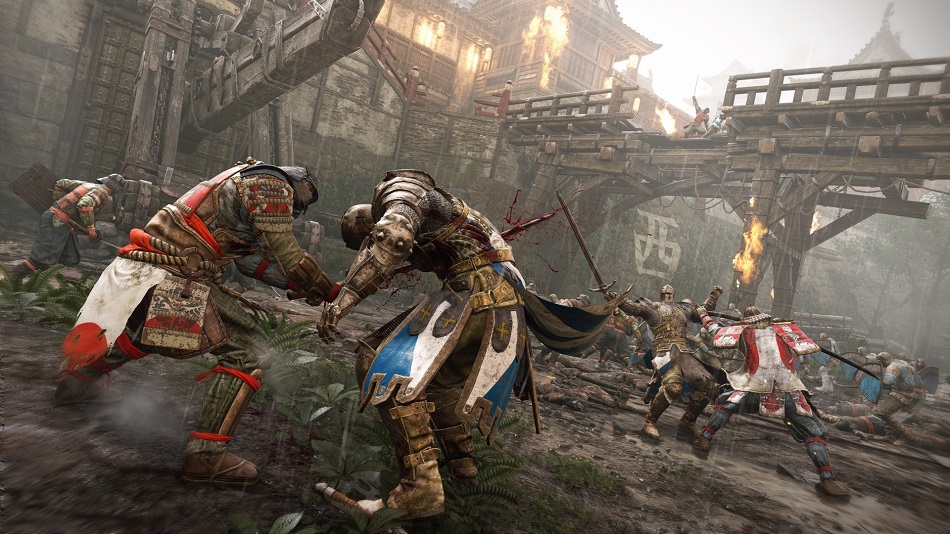 Unfortunately, For Honor can only really offer six Dominion maps and a duel mode for occasional quick fixes. While I love the combat, there’s no getting around the fact that the final product didn’t ship with enough content. That the game so openly flaunts microtransactions – costumes! experience boosts! fake money for real money! – is a twist of the blade.

Oh, and anyone who’s tangled with Assassin’s Creed matchmaking can expect the same level of infidelity here. For Honor, with its steep learning curve and (ahem) unwelcoming competitive community, is inevitably the sort of game prone to rage quits, so I question the logic of using peer-to-peer networking – mid-game interruptions and outright disconnections are disappointingly commonplace in For Honor.

Hell, even finding a game without at least four or five error messages and several minutes of waiting is a minor victory, and then good luck holding that group for more than a single round – if at least half of the players drop out, For Honor would sooner cancel the match than attempt to fill in the vacancies. Balanced teams clearly weren’t high on Ubisoft’s list of priorities, either, as just moments ago I was matched alongside three bots against a full team of actual, fleshy people.

In short, for a full-priced release that’s entirely multiplayer-driven, I expect more than six maps and dodgy server performance.

Notice that I just called For Honor “entirely multiplayer-driven” as this phrase illustrates how I feel about the single-player mode, an eighteen-mission slog through linear setpieces against AI-controlled hero characters. The combat is nowhere near as engaging when there isn’t another human thinking and making mistakes on the other end, as the AI soldiers all waver between “easily fooled” and “impossibly coordinated.”

The writing’s dreadful as well, shedding no insight into the workings of this nonsensical world and delivered with dour self-importance by characters whose faces we usually can’t see. While it’s tempting to say that For Honor’s story mode is better than nothing, in truth, I’d much rather have seen those resources dumped into enhancing the multiplayer. The campaign just sits there and takes up space while its infinitely stronger online component struggles to justify a sixty-dollar price tag.

I never got my fill of the game after the brief beta periods came and went, so it’s a relief that For Honor finally has a permanent place in my collection – it’s obviously doing something right. The melee combat is truly some of the best I’ve ever encountered, and I’ve been playing on a nightly basis, knowing what a rush it is if I find the perfect opponent. Unfortunately, I struggle to recommend it when the total package is so skimpy and the online so unreliable. I sense an earnest attempt by Ubisoft with For Honor, but at the moment all they’ve done is laid the groundwork for a stronger experience in the future. Rating: 6.5 out of 10

Disclosures: This game is developed by Ubisoft Montreal and published by Ubisoft. It is currently available on PlayStation 4, Xbox One and PC. This copy of the game was obtained via download and reviewed on the PC. Approximately five hours of play were devoted to the single-player mode, and the game was completed. Sixteen hours of play were spent in multiplayer modes, and many more were spent on the game’s alpha and beta.

Parents: According to the ESRB, this game is rated Mature and contains Blood and Gore and Intense Violence. It’s nonstop medieval hacking and slashing, full of beheadings, impalements and spurting blood. It’s not over-the-top or distasteful, but it is very brutal.

Deaf & Hard of Hearing Gamers: Subtitles are available for all story-related dialogue, and sound cues never play an important role in the game.

Remappable Controls: This game offers fully remappable controls, but only for keyboard.

Yeah, that one’s on me. What can I say, we’re only human and once in a while something slips through. ^_^

“In essence, For Honor is essentially […]”

So you really got to the essence, which is essential in an essay I say.

Yeah, Brad’s excuse for that edit was that he’s been short on sleep lately. Not that I’m any better — I was in such a rush to tease him about it that I seem to have forgotten to remove it myself!

Thanks for the catch. I’ll go poke Brad.

Post-script: Oh hey, so I guess I can make my own edits now? Nice. I tried that once on the old system and broke the site.

The wonders of modern technology.

I saw this comment in my emails and assumed you were sarcastically talking about the game.