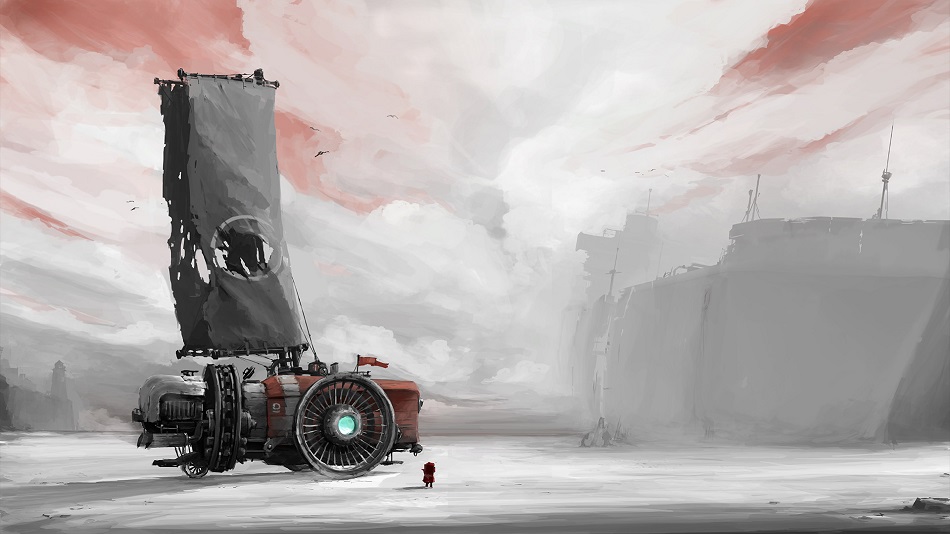 HIGH The roar of the soundtrack when everything’s going well.

LOW The world is laid out a bit… conveniently.

WTF I’m amazed that some people find the ending ambiguous.

At a glance, Far: Lone Sails looks like the sort of game that wallows in misery. The post-apocalyptic setting, the muted color palette, the lack of dialogue and general air of loneliness – all evidence initially points to yet another indie project reminding us that the world is a big, scary place that wants to kill us.

Yet when I think back on the several hours I spent with Far, the word that keeps bouncing around in my head is “companionship.” That may sound odd for a title with no supporting characters, yet the relationship at the center of Far isn’t between two people, but rather a single cloaked figure and the steampunk vessel that’s carrying them across the barren landscape.

The vehicle is, first and foremost, a striking visual presence. Situated atop a pair of enormous bicycle wheels and painted in bright red and turquoise to contrast against the largely monochrome backdrops, the ship rocks and staggers with endearing imperfection, discharging steam and buzzing with little alarms. There’s a bedroom on the top floor that serves no purpose other than to remind us that for the duration of our journey, this vessel is our home. Amidst cold, desolate environments, this thing feels welcoming and full of personality. 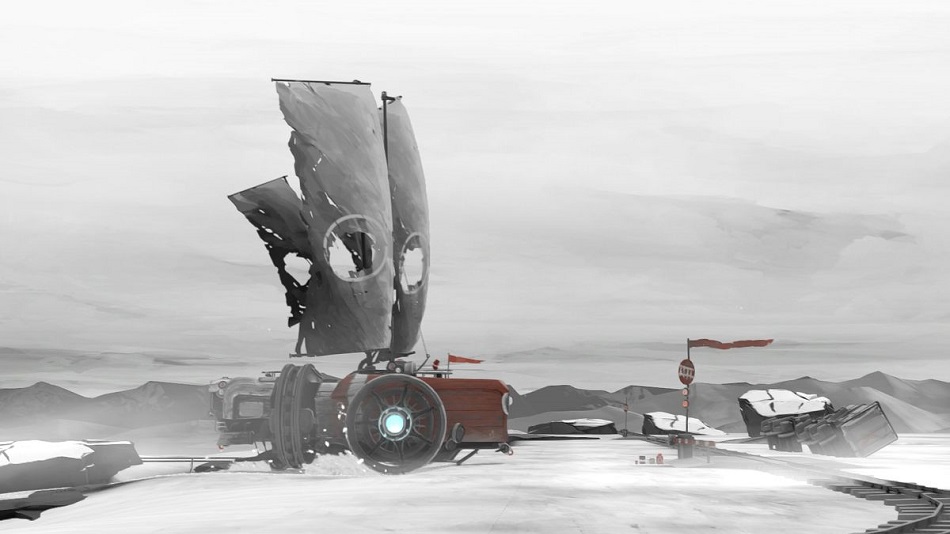 Far is centered on the struggles of operating such a massive, unwieldy machine. We’re given a 2D cross-section view of its insides, in which its mechanisms – the engine, sails, brakes, winch, and so forth – and all controlled with big red buttons. As the ship carries us to our destination, it’s our job to frantically run around maintaining it, disembarking to engage in some rudimentary platforming only when a gate needs to be opened or an obstacle cleared away.

Sometimes, keeping the vessel moving is a simple matter of raising the sails and letting the wind do all of the work. When the sails need to be lowered – either to get through a small gap, or simply because there’s no wind – it’s time to fire up the engines, at which point we have to keep the ship fueled. There are barrels of gasoline scattered about the world, but when those are scarce, keeping the engines running could mean having to (heartbreakingly) burn old-world artifacts.

Lest anyone think that Far is a relaxing experience, there is an actual fail state when players get careless. The ship takes damage if we don’t hit the brakes before running into obstacles, and fires break out if we forget to routinely release steam. There’s a juggling act in executing all of the ship’s required functions, but Far is unexpectedly empowering when things are going smoothly, the scenery is whizzing by and the dynamic soundtrack kicks into high gear. 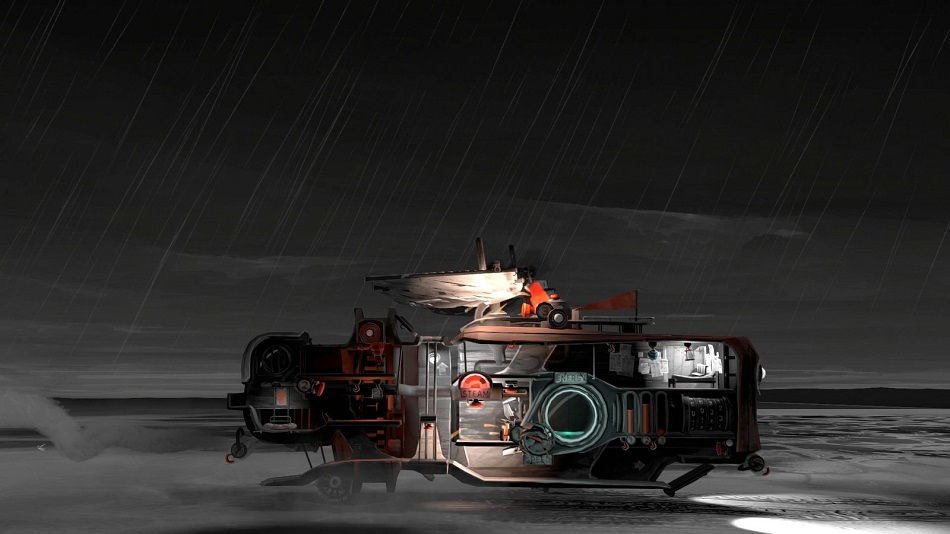 Through it all, I grew as attached to this ship as I would any speaking companion. I took care of this machine, and it took care of me. I felt genuine despair as it accumulated damage and boosts of confidence when given the opportunities to fix it up. When Far slows its pace to illustrate the two-way nature of this relationship – such as when I ran out of fuel and had to physically pull the ship along – it always felt earned, because I knew the vehicle would give back.

I could maybe complain about the contrived nature of this world’s layout – it’s convenient, for example, that we just happen to roll into a wheel replacement shop right when we need a new set – but I get the sense that developer Okomotive doesn’t want us to get carried away with the details. I’ve seen some dissatisfaction over Far’s ending, likely from people who wanted clearer answers, but I thought it provided satisfying closure without shattering the delicately established tone. It communicates more with a single audio cue than it ever could with words.

I avoided Far for much of the year, thinking it was another bog-standard indie exercise in gloom and ambiguousness. I was delighted to instead discover something beautiful, unpretentious and even hopeful. Don’t make the mistake that I almost did. Rating: 9 out of 10

Disclosures: This game is developed by Okomotive and published by Mixtvision. It is currently available on PC. This copy of the game was obtained via paid download and reviewed on the PC. Approximately three hours of play were devoted to the single-player mode, and the game was completed. There are no multiplayer modes.

Parents: According to the ESRB, this game is rated Everyone and has no descriptors. There are a few moments of peril, but that’s it. Perfectly suitable for children.

Deaf & Hard of Hearing Gamers: There is no dialogue, written or spoken, but a few subtle narrative beats are communicated through sound. Audio cues don’t affect the game’s playability in any way that I could discern, but I worry that players who are hard of hearing may not get the entire picture.

Remappable Controls: No, this game’s controls are not remappable. When played with an Xbox controller, the A and B buttons are used to jump and lift objects (respectively), while the two triggers are used to zoom the camera in and out.