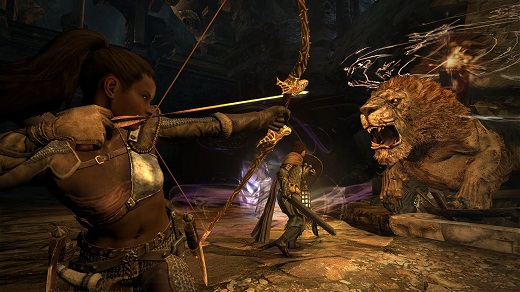 HIGH Chasing a griffin across the map…

LOW …and then having to walk all the way back.

WTF Seriously, at least give me a horse or something.

A Western-style open-world RPG like Dragon's Dogma seems like a natural fit for PC, and I suspect I'd have been more charitable towards it if I'd played it back when the console fans were first getting in. The famously PC-averse Capcom waited three and a half years to port it to this platform, putting it in the unenviable position of being compared to our 2015 Game of the Year, The Witcher 3: Wild Hunt.

It's been a long time to wait for such a creaky game, and lengthy journeys with anticlimactic finishes are something of a running theme with Dragon's Dogma. But, the game balances its Western and Japanese influences in such a unique manner that it shouldn't be dismissed outright. However dated Dragon's Dogma feels, it still has value.

Interestingly, it combines the visual style and structure of an average medieval fantasy RPG with the large-scale, emergent combat thrills of Monster Hunter. One would think that a Capcom game would be more fluent in the latter, and indeed, my favorite moments in Dragon's Dogma involved nerve-wracking standoffs against cyclopes, chimeras and other enormous creatures. However, a tedious late-game dungeon crawl which strips away all pretense of exploration and discovery and focuses entirely on the action demonstrates that the combat alone isn't what makes this title work.

As it turns out, the setting of Dragon's Dogma, Gransys, is its greatest asset. Capcom establishes a strong sense of geography without lazily color-coding regions the way some developers would give us an ice world, a desert world, and so forth. Situating much of the territory along a coast makes directional awareness painless, and while there's plenty of content here, Dragon's Dogma scores points for not being unreasonably big. Gransys doesn't have many important landmarks, but that's what makes them all memorable. When I come across a ruined fortress, it sticks out because it's not the twelfth one I've run into.

Gransys consistently follows the standard open-world rule of actually being open. Most of Dragon's Dogma can be explored from the outset, and Capcom walls late-game sections off the way they should: by kicking players' faces in with tough encounters when they stray too far from the beaten path. It balances freedom and a sense of pace well.

For example, I spent most of the game tantalized by the silhouette of a curious coliseum-like structure on the north end of the coast, but my attempts to reach it always ended prematurely. When I was finally forced to venture there for a climactic quest, I realized that the story's introduction to this location was far more exciting than if I'd just blindly stumbled upon it. That said, I'd always had the freedom to decide for myself when I'd see this place, and that makes a big difference.

Dragon's Dogma is also one of the few RPGs in which the day/night cycle is more than an aesthetic touch. Enemy encounters change drastically at nighttime, and visibility is so low that players are forced to equip lanterns (powered by finite fuel) in order to see where they're going. Venturing out at night always felt genuinely hazardous, and it's an important component of an already intimidating game.

Unfortunately, for as engrossing as Gransys is, the lack of a straightforward fast travel system means that it's nearly impossible to not get sick of it. While the tweaks in the Dark Arisen expansion made getting around slightly more bearable, teleporting can only be done via expendable items, and only to an extremely limited number of warp points, most of which players need to place themselves. Even being able to run without quickly depleting all of one's stamina would have helped to alleviate this issue, but as it stands, players will inevitably spend a lot of unnecessary time retracting their steps.

It got especially tiresome for me late in the campaign, when the game developed a nasty habit of asking me to trek all the way back to places immediately upon returning from them. I was just at the Greatwall, game. Why did you tell me to return to the hub if you were gonna make me walk all the way back in the very next mission?

The other issue with Gransys is that, for as good as it looks and as well as it flows, it's unsatisfyingly light on absorbing lore. The setup is a snoozer (a villager is chosen by the fates to combat a rising dragon menace), the characters are one-dimensional, and actual sources of important information are few. The vast majority of the story's intrigue comes from a universe-altering twist at the very end of the game, and Capcom made a fatal mistake in hiding this detail behind both a fake-out ending and a painfully arbitrary final dungeon.

There's debate over whether this endgame stretch of Dragon's Dogma is considered optional or not, but I'd argue that the plot is almost entirely lacking in substance without this final development to tie it all together. That's why it's puzzling that Capcom chose to wall it off with the game's worst content—a handful of drab tombs copied and littered with encounters recycled from the rest of that campaign. The neat final twist aside, it's nearly the worst note to end Dragon's Dogma on.

The base combat is quite good, though, mainly for its physicality. There's a big emphasis on battling monsters much larger than the main character is, and players can actually climb these creatures, targeting and incapacitating certain limbs. It's reminiscent of Shadow of the Colossus, and one of the mini-bosses is a stone golem with glowing weak points all over its body, so I don't make that comparison lightly.

While the combat isn't without its flaws, like the wonky physics or the baffling fact that there's no camera control while grappling, Dragon's Dogma delivers appropriate thrills for bringing down enormous beasts. I was having such a good time throwing myself in that I can't imagine playing this game as anything other than the super-nimble rogue class. I'll leave casting spells from the sidelines to the AI companions, thanks.

Speaking of which, an overhyped but still nifty feature in Dragon's Dogma is the pawn system, which relegates many of the combat responsibilities to three very chatty AI-controlled teammates. One of the game's best design decisions is that pawns can be revived indefinitely, meaning that they're only ever a help rather than a nuisance. Further, training and utilizing pawns properly can be a game-changer for trickier fights. It's even possible to go online and recruit pawns from other players, lending a community-driven aspect to something as basic as party management.

So Dragon's Dogma has worthwhile elements even if it feels dated, and even if I very nearly quit just before hitting the all-important twist that actually made the story worthwhile. PC gamers who've been salivating over this one for years have worse options, and those who can tolerate its clunky controls and interface will be rewarded with a mountain of content. Let's just hope that if Capcom ever makes another game like this, they'll release it on the PC before it's eclipsed by other, more polished action RPGs. Rating: 6.5 out of 10


Disclosures: This game was obtained via publisher and reviewed on the PC. Approximately 50 hours were devoted to the single-player mode, and the game was completed. There are no multiplayer modes.

Parents: According to the ESRB, this game contains blood and gore, partial nudity, suggestive themes, and violence. I can't say I picked up on any sexual content, and the violence isn't terribly extreme. It's fantasy action with the gore largely limited to chopping monsters' tails off and so forth. Teens can handle this.

Deaf and Hard of Hearing: Subtitles are available for all dialog, and sound doesn't play a vital role in the game. It's probably better not having to listen to those damn pawns yap all day, anyway.

No worries, Kif – always happy to talk Dogma. :p Don’t get me wrong, there’s a lot of non-combat stuff in the game to appreciate including some great scenery, exploration and dungeon diving – just that the actual writing is so ‘ye olde’ that it’s hard to take any of the storyline seriously apart from the excellent end run. You might have gathered that I’m a pretty big fan of Dogma – Clinging off the back of a griffin while trying to crack its head open with a length of solid steel is pretty amazing stuff. It’s definitely not a… Read more »

Hey, thanks for the reply =) I was more looking into it for a bit of story if I’m honest, I like a good story if it’s steeped in lore that I can geek over, playing mmo’s for a long time will do that. It depends because I’m fussy, it’s either well written and compelling enough to draw me in or not. Combat wise, I’m fine as long as it fits well with the theme and isn’t clunky. I’ll take the trade off because I play more dynamic titles already for that pure combat experience. K.

Kifl – for what it’s worth, I’d take Dragon’s Dogma over the Witcher 3 any day of the week, and twice on Sundays. And hell, twice every other day of the week, come to think of it. It didn’t click with Mike as seen in this review, but it’s easily one of my favorite games from the last several years. The combat is leagues ahead of just about anything comparable (you could argue the Souls games / Bloodborne, but they’re very different approaches) so it’s basically whether you’re in it for combat or story. The former is exemplary, the latter… Read more »

I was debating whether or not to get this, It’s an actual shame because the idea of the game looks great. I didn’t play the console version but I agree if you’re going to put a game up against The Witcher 3 then it’s going to have a tough time for sure.