The Fragile Slip With Teeth 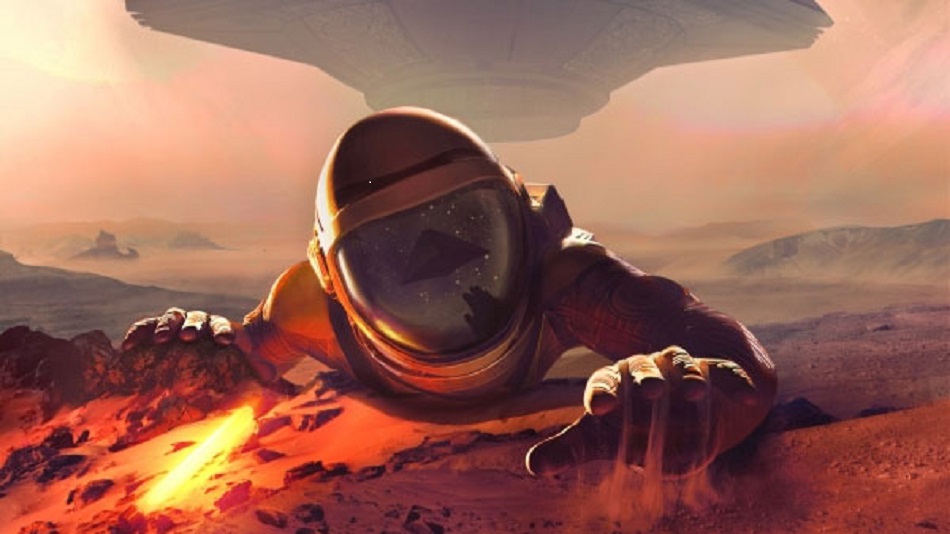 HIGH Probably the best zero-gravity controls in any game, ever.

WTF A couple of trippy plot turns that don’t feel adequately set up.

Virtual reality may well be the biggest step forward for videogames since the medium went 3D, but it’s still such a niche market that triple-A studios are barely touching it. So, while there are a ton of ambitious ideas being thrown around in VR right now, they’re mostly being handled by small teams with limited resources.

I’d wager that’s how we wind up with something like Downward Spiral: Horus Station — a game perfectly illustrative of both the potential and limitations of the current state of VR. From a glance, it’s a thinly-sketched campaign, full of repetitive enemy encounters, simplistic objectives, and recycled assets. But 3rd Eye Studios have concocted perhaps the most intuitive means I’ve ever seen of navigating a zero-gravity environment, and that goes a long way toward making Downward Spiral a remarkably immersive space game.

Set aboard an orbital station on which some sort of deadly catastrophe has occurred, players navigate by using the motion controllers to grab ahold of objects in the environment and physically push themselves about. That alone feels great, but they’re also aided by a booster and a grapple gun, both of which are operated on a simple point-and-shoot basis.

Being able to move my head and hands independently with this setup meant I could look, shoot, and navigate along three axes, all simultaneously. I really can’t overstate how good that feels, and it’s doubly impressive considering that moving around in zero-G is something that’s never been mapped smoothly to a traditional controller. This is a forward-thinking developer using blossoming technology to accomplish something that hasn’t been done in games before. 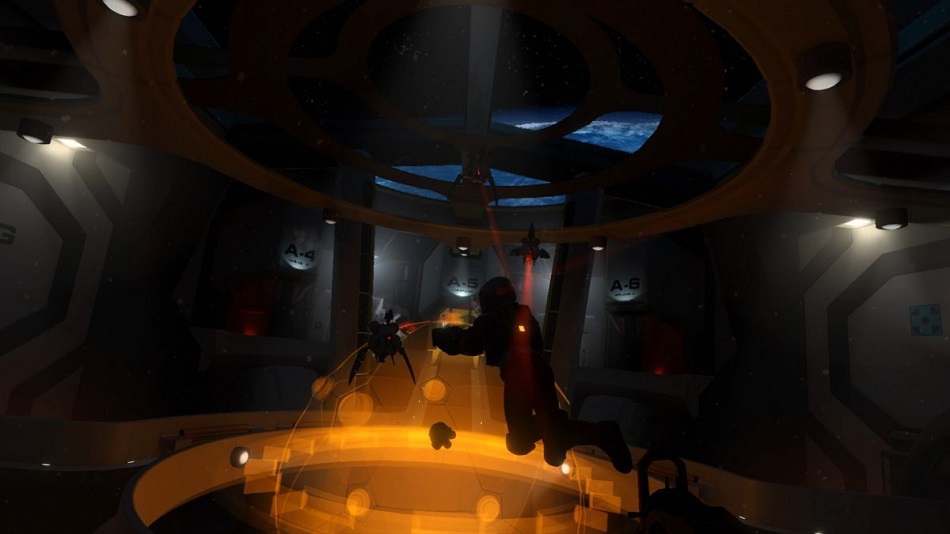 It also solves the problem of walking in VR games, since this is a situation in which the player character is never using his or her feet anyway. Climbing is a mechanic that translates extremely well to VR motion controls, and this feels like a natural extension of that.

Unfortunately, divorced from its control scheme, Downward Spiral isn’t terribly interesting. There are a handful of genuinely impressive set pieces – usually involving spacewalking, and always elevated by Ville Valo’s chilling score – but rooms and assets are reused so frequently that I sometimes had trouble figuring out whether or not I was retracing my steps. The station is full of computer terminals that serve no purpose and lockers with nothing in them. It’s a setting that doesn’t often feel like a real, lived-in place.

In addition to making Downward Spiral repetitive, this also means that there’s very little in the way of environmental storytelling. Although I appreciate 3rd Eye Studios’ attempt to sell this narrative without cutscenes or dialogue, there’s so little here to chew on that it starts to feel less like minimalism and more like Downward Spiral just doesn’t have much of a plot.

The combat is a mixed bag, and there are important lessons to be learned here about what does and doesn’t work in this sort of game. The most common enemies use hitscan-based weapons (which means their projectiles don’t have any travel time between when they’re fired and when they hit) and player movement is so slow that the only defense is to shoot them down as quickly as possible. Damage-per-second races are never a good time, even when, as in Downward Spiral, there’s no progress lost when a player dies. 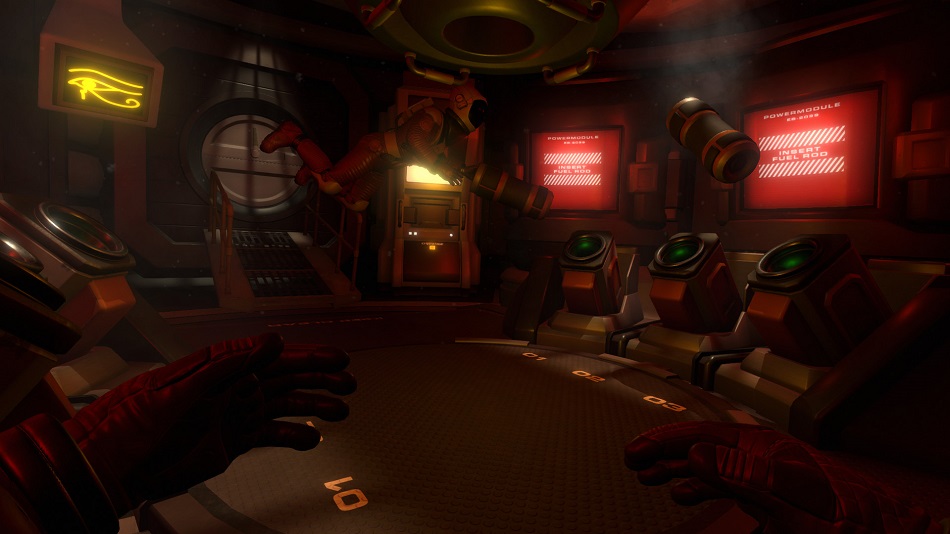 Some of the later enemy encounters are more successful, however, when they force players to dodge slow-moving projectiles or maneuver around to target specific weak points. The campaign’s lone boss battle is also satisfying in that it involves overcoming a massive foe through wits rather than force. 3rd Eye Studios also thoughtfully included a combat-free version of the campaign, but experiencing Downward Spiral that way means missing out on some pretty engaging scenarios.

Downward Spiral is surprisingly full-featured for a project of this scale, including cooperative play (which doesn’t add much to the campaign, but is a nice addition) and a couple of arena-based multiplayer options. The horde mode isn’t great, mainly because the enemy design and AI don’t feel particularly well-balanced for that kind of onslaught, but I actually had a pretty good time with the deathmatches since the unique controls sparkle when everyone’s on even ground.

The most surprising feature, however, is the inclusion of non-VR support. Obviously, that expands Downward Spiral’s potential audience, but so much of the appeal is in the revolutionary way it allows players to explore 3D environments. 3rd Eye Studios did the best they could to emulate their unique mechanics on more traditional control inputs, but it’s not the same, and the core campaign just isn’t strong enough to stand on its own.

As damning as it sounds, owning a VR headset elevates Downward Spiral from skippable to must-play. It genuinely feels that good to experience, even if the design in its most basic form – removed from presentation and mechanics – is somewhat uninspired. VR opens a world of possibilities to this medium, and it’s thrilling to see new territory mapped out in real-time. I long for the day when a concept like this is matched with the production values it deserves, but for now, Downward Spiral is simply unlike anything I’ve ever played, and that’s enough. Rating: 7 out of 10

Disclosures: This game is developed by and published by 3rd Eye Studios. It is currently available on PC. This copy of the game was obtained via publisher and reviewed on the PC with Vive. Approximately four hours of play were devoted to the single-player mode, and the game completed. One hour of play was spent in multiplayer modes.

Parents: According to the ESRB, this game is rated Teen and contains Violence. The only enemies are robots, so there’s no blood or gore. Dead bodies are strewn about, but they’re all wearing spacesuits, and thus no graphic details are visible.

Deaf & Hard of Hearing Gamers: The settings include an option for subtitles, which completely baffles me, as I encountered no actual dialog within the game, spoken or written. Sound cues never play a crucial role in the game, but they can make spotting enemies much easier. On the other hand, the game features a combat-free mode.

Remappable Controls: The controls are fully remappable for keyboard and mouse, but not for a standard gamepad or VR motion controls. 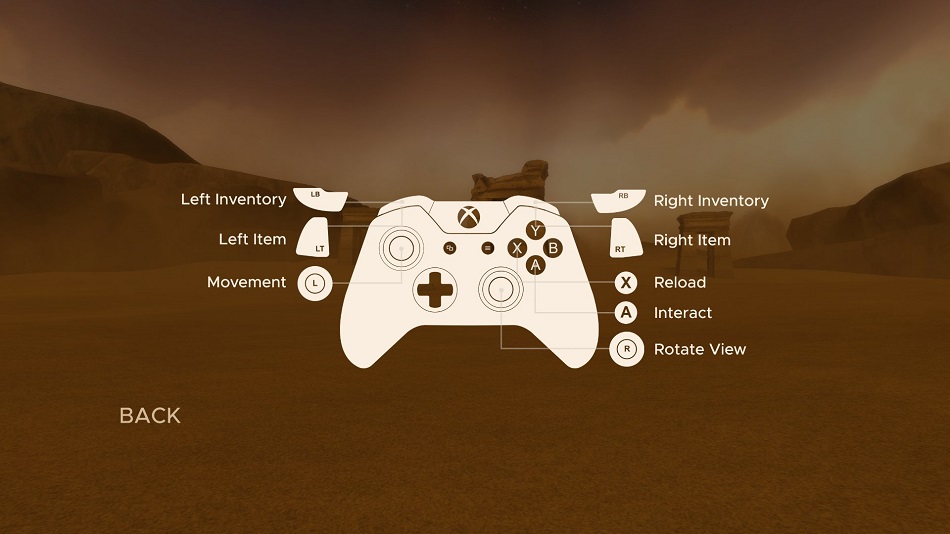 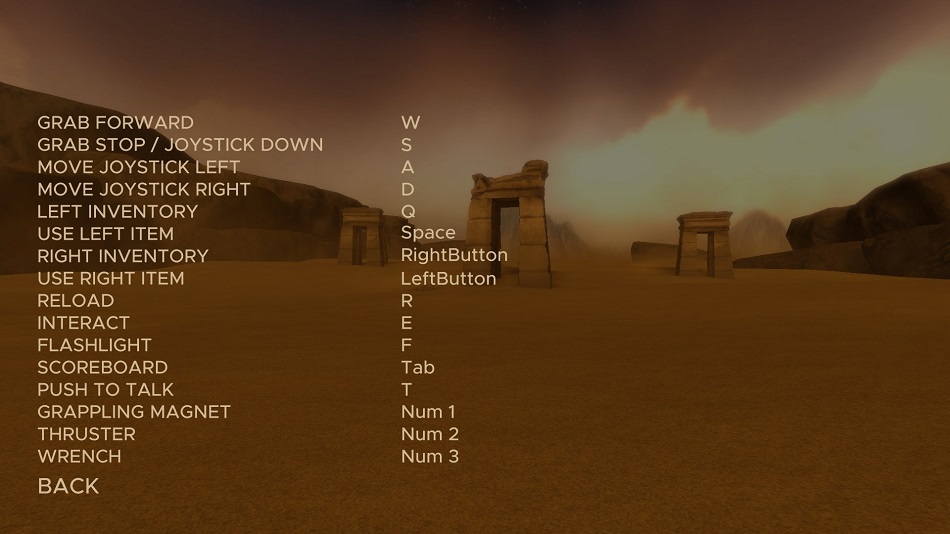