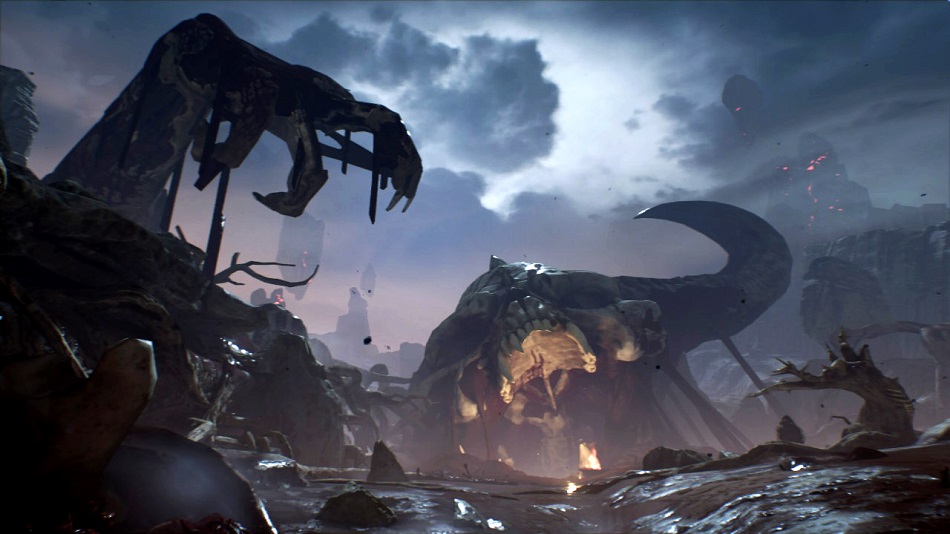 HIGH Doom on a handheld! And it’s okay!

LOW The font size is way too small for the Switch’s screen.

Bethesda Softworks has been publishing games for over three decades, but until this year they’ve only released a handful of titles on Nintendo platforms. So, it’s surprising to see them leading the third-party charge on the Switch. This port of last year’s Doom is their first such experiment, and it’s a fascinating one. The Switch is quickly becoming a bastion for indies, and we know Nintendo’s own games will be optimized for the system, but how could this device handle a big-budget franchise release praised for its looks, speed and smoothness?

I’m pleased to report that Doom on the Switch retains much of what made it my favorite game of 2016, and I say this as a PC gamer and a performance nut. This piece of hardware was never meant to compete directly with other platforms in the power department, so obviously a number of concessions have been made to get Doom running and stable. But the fact that we’re even having this conversation – that a handheld port of a recent, triple-A title exists and is perfectly playable – is remarkable, and makes me excited for the Switch’s future.

Of course, it helps that even a severely downgraded rendition of Doom is still a blast. This was my personal Game of the Year and the site’s overall runner-up. Corey and Darren both explained why it’s worth any shooter fan’s time, so I’ll simply reiterate by saying that Doom is a giant middle finger to a decade’s worth of cover-based slogs. It’s a blazingly fast game that’s calculated from every angle to keep players close to the action, and to call its immediacy a breath of fresh air would be to undersell it. This is my new measuring stick by which every 3D action game is judged.

On Switch, the resolution’s been bumped down to 720p, though people like me who mostly play in handheld mode will barely notice. More notably, the framerate has been knocked down to 30fps. It’s mostly consistent in maintaining this level, save for the campaign’s most hectic moments. (The brouhaha at the top of Argent Tower is an example of this.) On the control side of things, going from mouse-and-keyboard to the Switch’s stubby analog sticks was a huge adjustment for me (and I finally understand why Doom’s late-game bosses were so heavily derided by many people) but the port plays smoothly nonetheless. 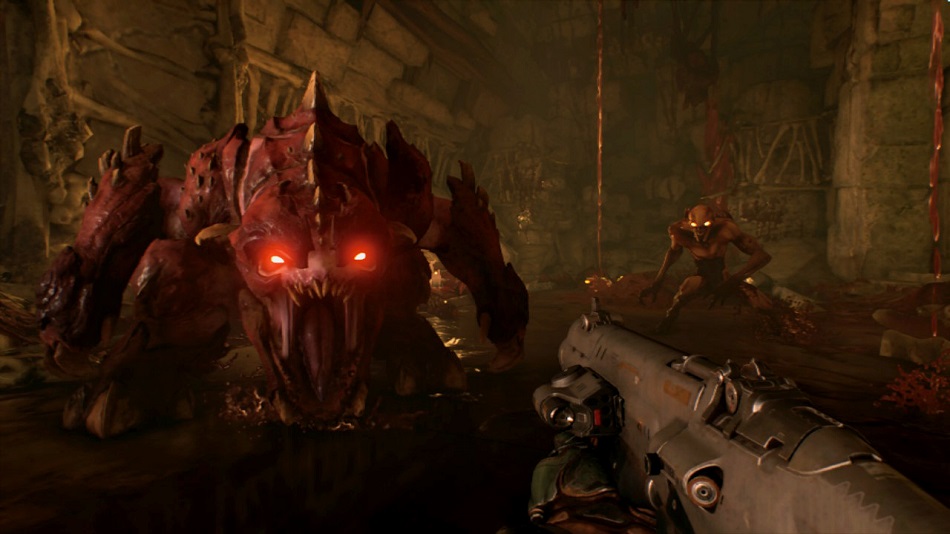 As for how it looks, well, the textures and particle effects have clearly taken a hit in the effort to get this thing running on Nintendo’s hardware, but I only noticed because I have several dozen hours of the PC version on ultra settings to compare it to. For a handheld, this thing looks astonishing. The smoke clouds and whirring industrial fans that made the Mars facility an atmospheric and intimidating environment are preserved beautifully, and the lighting effects in particular don’t seem to have been downscaled significantly. If this were the only version of Doom, we’d all be praising the technology behind it rather than criticizing it for its inferiority to its console and PC big brothers.

The port job was overseen by a company called Panic Button. While their work here is commendable, it’s not without hiccups. Most importantly, they’ve committed the cardinal sin of transitioning a console game to a handheld – they forgot to adjust the font size. While I have no trouble reading the game’s small text on a TV, it’s a different story on the Switch’s screen.

Beyond that, this version features a handful of technical wrinkles. There’s far more clipping this time around, and I encountered several audio issues, the weirdest of which was when my Switch’s right speaker stopped producing sound in-game until I restarted the software. None of these problems affect playability, but they do reinforce that this is neither the best-looking or -sounding version of Doom on the market. But really, no one expected it to be.

Anyone who buys Doom on physical media will have to download the multiplayer mode separately, but whether it’s worth the storage space is another question. Doom’s online component was the most widely criticized aspect of the original release, mainly for including some modern-day trappings (like unlockable loadouts) that its campaign made such a point of avoiding. I still think the mode is fine, if a bit generic, though I question whether Switch is the right environment for this sort of competitive play. At the very least, all of the multiplayer DLC is included in the box. What’s not included, unfortunately, is SnapMap, the level editor that greatly increased Doom’s lasting appeal.

So, as was inevitable, Doom is an inferior experience on Switch in virtually every way, with the major exception that it can now be taken anywhere. And should major publishers continue making concessions on triple-A titles to release them on this platform, that’s the tradeoff that’ll be hanging over consumers’ heads. Whichever direction people swing, I’m glad that Bethesda is giving us the choice, and that the wonderful Doom survived the transition to handheld mostly intact. Rating: 8 out of 10

Disclosures: This game is developed by id Software, ported to Switch by Panic Button, and published by Bethesda Softworks. It is currently available on PlayStation 4, Xbox One, PC and Switch. This copy of the game was obtained via publisher and reviewed on the Switch. Approximately 12 hours of play were devoted to the single-player mode, and the game was completed. Two hours of play were spent in multiplayer modes. Many additional hours were spent with the game’s initial release.

Parents: According to the ESRB, this game is rated Mature and contains Blood and Gore, Intense Violence and Strong Language. Although there’s nothing morally reprehensible about Doom, this is about as violent as a videogame can get. Tearing, slicing, gibbing, and all of that good stuff.

Deaf & Hard of Hearing Gamers: Amidst the game’s fast-paced firefights, directional sound can be extremely valuable in locating enemies, and music cues can also alert players to threats. Doom is definitely more difficult without sound. Subtitles are available for all dialogue, though be warned that the font is extremely small and difficult to read on the Switch screen, and I say this as a young guy with good eyesight.

Remappable Controls: No, this game’s controls are not remappable, though six different presets are available.