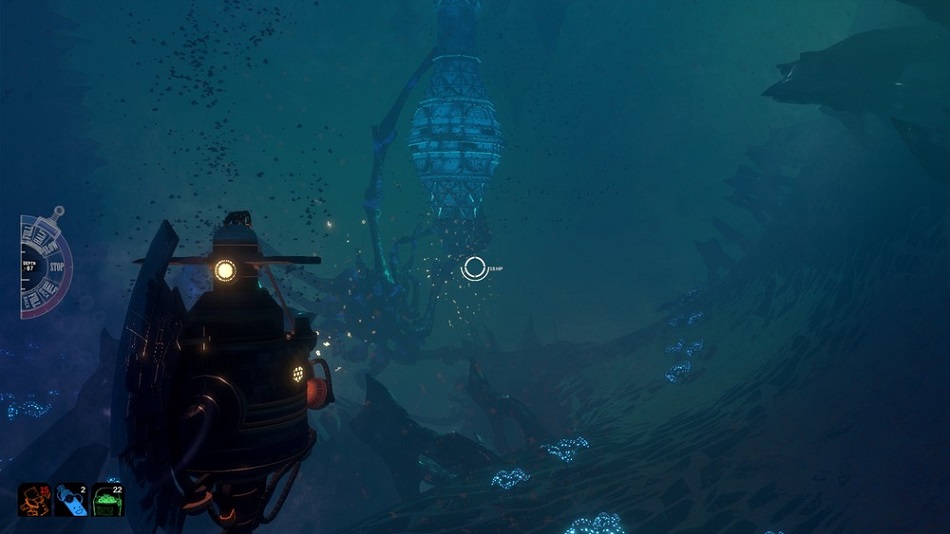 HIGH The search for a passport. Just wait.

LOW Fiddling with the miserable torpedo targeting during a heated battle.

There’s something majestic and imposing about the bottom of the sea as the setting for a videogame. The lack of sunlight reduces one’s surroundings to silhouettes, and the weight of the water increasingly threatens to crush those too far underneath it. The ocean is such an inhospitable place that we’ve only explored about five percent of our own here on Earth. Forget about space being the final frontier — there’s plenty yet to be discovered on our own planet.

Diluvion, a Jules Verne-inspired underwater adventure from Arachnid Games, capitalizes on that otherworldliness. It depicts a planet on which angry gods have submerged human civilization and sealed it under an impenetrable layer of ice. Humanity doesn’t belong here — food is scarce, vision is limited, and diving too deep without a heavily reinforced submarine will end painfully. Life under the sea is a nonstop struggle, and rarely does a player feel comfortable in Diluvion.

Take navigation, for example. There is a map, but it doesn’t actually tell players where their vessel is. Instead, they must use a compass, a sonar, and their knowledge of their surroundings to determine where they are and which direction they should be traveling. Venturing into new regions always carries the risk of not only draining one’s supplies and oxygen, but throwing off their sense of direction, as well. I died a couple of times not just from straying from safe zones, but from not being able to find my way back in time.

Between this dangerous exploration and the sub’s slow movement speed, Diluvion is a game specifically designed for patient people — those who want to soak up the atmosphere and actually feel like they’re battling the elements in a steampunk underwater voyage. Players able to slowly unravel this eerie world will be rewarded with moments of sustained awe and terror. Since Diluvion makes great use of silhouettes, Arachnid often gleefully plays the misdirection game. What seems at first like a mountain or a shipwreck may turn out to be something a bit less azoic. 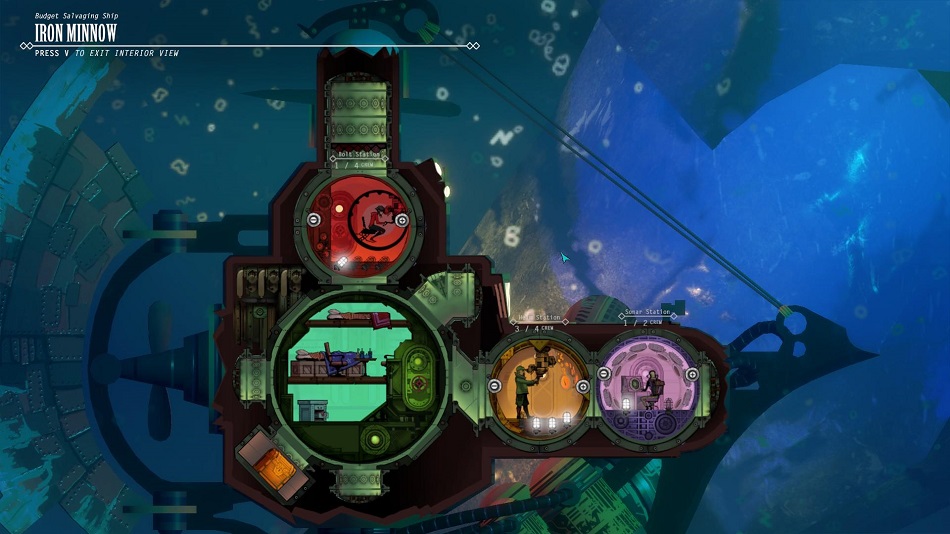 Diluvion didn’t need a ton of combat, but it’s here anyway. Early encounters, mostly against pirates, are perfectly fine and play out like dogfights in slow motion. As things progress and players venture deeper into the ocean, however, they begin engaging enemies far more accustomed to moving through water than humans are. It’s often overly-hectic and runs perpendicular to the otherwise slow, measured pace. The room before the final boss (which players will have to replay if they fail to kill said boss) is a particular nightmare in this regard, ending the campaign on something of a sour note.

It doesn’t help that the sub’s torpedo launcher, meant to be a tide-turner, suffers from the world’s most fiddly targeting system. Locking onto an enemy that isn’t stationary is borderline impossible, since the lock is lost if players stray even a few pixels while charging the shot. Combat in Diluvion’s initial build was further hampered by the ship’s inability to move independently of the camera, but a quick patch has thankfully fixed that.

Players are meant to toy with their ship’s attributes with an FTL-esque crew management mechanic, and there’s even a temporary slow-motion function to assist in making changes under pressure. Unfortunately, this aspect falls victim to bad interface design. Players can assign additional crew to man the various chambers (engine, guns, etc.) for improved performance, but they can’t determine which characters go where. It begs the question why different NPCs have unique stats in the first place — it’s a promising idea that feels underdeveloped.

I’ll also add that Diluvion is just a bit longer than it should have been. As wondrous as its three maps are to explore, they lose their mystique after players have become accustomed to them. Extending the length of play via fetchquest padding is never a good thing, but it’s particularly harmful in what is already such a slow-paced game.

However, all of its issues are worth enduring for the haunting and beautiful world that Diluvion portrays. The limited draw distance, slow movement speed and near-total lack of signposting will grate on players looking for immediate thrills, but I find it praiseworthy that Arachnid would place so many deliberate handicaps on the player in service of atmosphere and immersion — it’s a spell that worked on me the vast majority of its running time. Many games render alien worlds, but Diluvion actually transported me to one. Rating: 7 out of 10

Disclosures: This game is developed by Arachnid Games and published by Gambitious Digital Entertainment. It is currently available on PC. This copy of the game was obtained via publisher and reviewed on the PC. Approximately 16 hours of play were devoted to the single-player mode, and the game was completed. There are no multiplayer modes.

Parents: As of press time, this game has not been rated by the ESRB. There’s one scene of a character sustaining a bloody injury. Otherwise, it’s just harmless submarine violence.

Deaf & Hard of Hearing Gamers: Music cues can be helpful for determining whether enemies are about to attack, but the game is perfectly playable without sound.

Back in the late 2000s I played AquaNox 2: Revelation and ever since have really longed for an underwater submarine-type game. More so in third-person perspective as a variant simulation of flying in space. And so, this is the basic reason I was so disappointed by Bioshock. But I look forward to trying this game out.

This might be the game for you, then. Even AquaNox 2 kinda just felt like a space sim underwater, whereas this one much more astutely captures the heavy feeling of actually moving and navigating underwater.

And I came this close to name-dropping BioShock as a great example of how to waste a setting like this. Which is why Soma >>>>>>>>> BioShock.