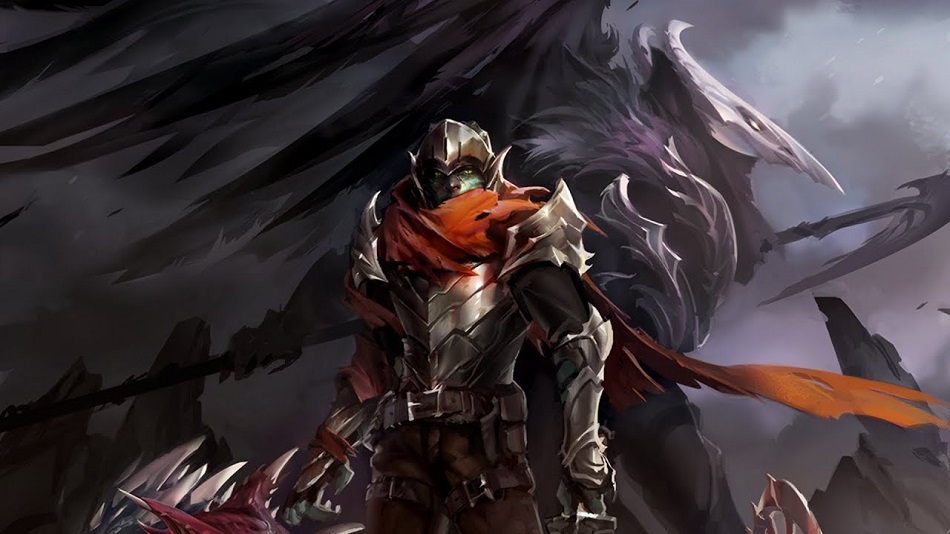 LOW The observatory level gets a little gung-ho with respawning enemies.

WTF I somehow completed the game without finding any axe abilities.

I realize that drawing comparisons to Dark Souls has become lazy shorthand for describing any game that happens to be difficult, but there’s an entire subgenre of action RPGs openly inspired by Hidetaka Miyazaki’s iconic series. Although it’s hard to pin the formula down to a single characteristic, titles like DarkMaus and Salt & Sanctuary combine minimalist storytelling and stamina-based combat to pay unmistakable homage to the Souls franchise.

Death’s Gambit has already been criticized for feeling too familiar. The setting, the menus, the character builds, the letter-grade weapon scaling system – it all openly channels the Souls series. One of the NPCs even jokes about sending the hero on a quest to ring two bells and then collect — and I quote — a “soul vessel.” Developer White Rabbit doesn’t even try to hide its influences, but that’s not a bad thing. Not only do I actively seek out games such as this, but my time doing so has taught me how difficult it is to nail this particular formula. It may not have original ideas, but few have emulated From Software’s flagship franchise as well as Death’s Gambit.

The trick isn’t just to make a difficult game, but to build a world that’s both wondrous and inscrutable, where winning battles is a reward secondary to unraveling the lore. Death’s Gambit knows not to over-explain things, because after I’ve exhausted myself memorizing a boss’s attack patterns and beating it with only a fraction of my health remaining, I’m gonna be looking hard for a reason behind it all. 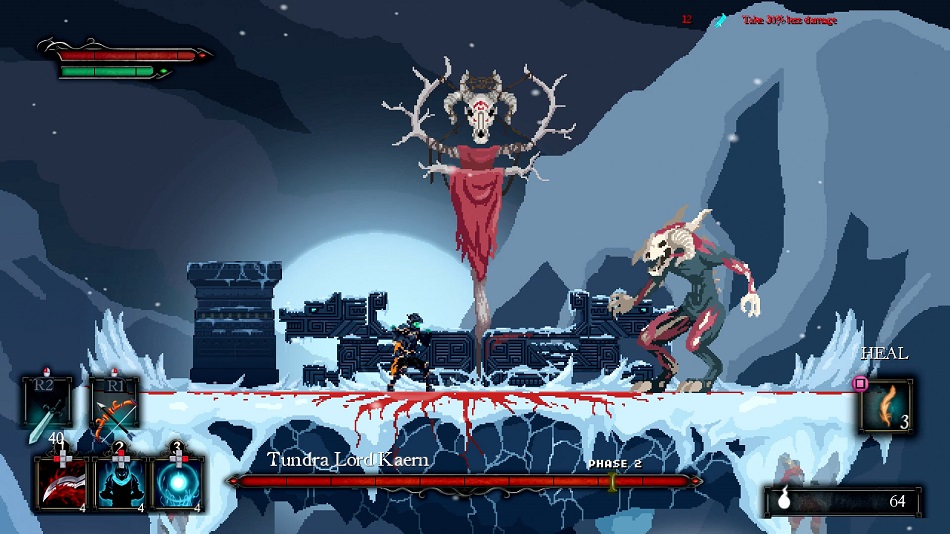 To their credit, the answers are there. They’re tucked away in the cryptic dialog and abundant environmental details, but a game like Death’s Gambit can get away with that because the combat already requires our utmost focus. To play it is to be enshrouded in its rules, and that lends it the sort of subtlety that From Software is famous for. In Death’s Gambit, the simple act of entering a new area, free of fanfare, can be an infinitely more powerful narrative device than any cutscene.

The story concerns a warrior named Sorun who signs a contract with Death – as in, the actual personification of death, complete with a scythe and a black cloak – that makes him immortal. Sorun doesn’t initially know what his mission is, but this newfound immortality means that he’ll always return to life when he falls in combat. And so, as with the Souls games, narrative justification for dying and being resurrected is built right in to the point that boss characters voice shock when Sorun doesn’t stay down.

In fact, more so than almost any title I’ve ever played, dying in Death’s Gambit feels not just unavoidable, but thematically integral. New conversations and cutscenes often open only when Sorun has fallen and been revived, and the idea that players are theoretically leaving corpses all over the place even has some amusing mechanical payoffs that I won’t spoil. White Rabbit even lets us keep our experience points when we die, as if to hammer home that this is all just part of the process.

Of course, one of the big reasons that we die so frequently is that Death’s Gambit is unsurprisingly brutal. Combat revolves around a regenerating stamina meter, meaning that players can’t overexert themselves and need to be constantly looking for opportunities to recover in the heat of battle. This should be familiar to everyone by now. 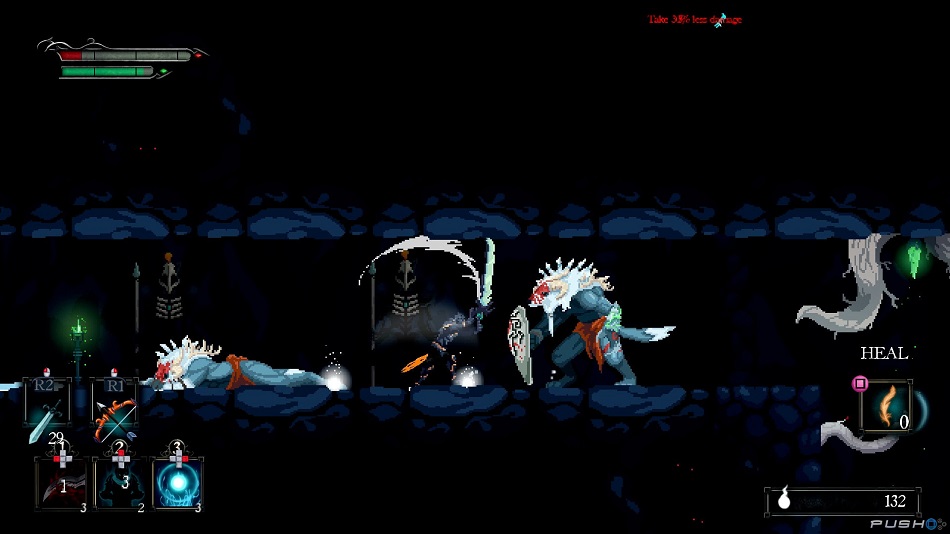 One of the key rules of a Souls game is that enemies need stamina restrictions as well, since it’s unfair to ask us to constantly pause for breath when our opponents can attack all they want without repercussions. It’s tough to gauge how strictly a game follows this principle, but I will say that for as punishing as Death’s Gambit often is, it never felt unfair. After a few rounds with a boss, I’d get a feel for its patterns, and each attempt would be more successful than the last. It helps that dodging gives players a generous helping of invincibility frames. Thank Christ they got that right.

I’m slightly annoyed that Death’s Gambit doesn’t include a map, since it’s not as easy to maintain one’s bearings in a 2D environment, but the world is laid out coherently enough that it’s not really a problem. More importantly, each level is visually distinctive without being ‘elemental,’ and the world is full of memorable landmarks. When I was inevitably told that I couldn’t enter the final area until I backtracked and found X number of doodads, I had a good sense of which places I still needed to explore.

Ultimately, I had very few issues with Death’s Gambit apart from the lack of a map. I didn’t even have the overabundance of technical issues that some are reporting, though the framerate did have a habit of stuttering whenever Sorun’s guard was broken.

Although it’s weird to describe a game as “gutsy” when it’s so transparently aping a popular franchise, it still takes bravery to produce a title as deliberately impenetrable this, where the answers are so vague and players are met with resistance for seeking them out. That Death’s Gambit is beautiful and rewarding enough to be worth the struggle is what makes it a more successful homage to Dark Souls than most. It’s not the most creative game, but that doesn’t matter when so few developers are capable of pulling this kind of trick off. Rating: 8 out of 10

Disclosures: This game is developed by White Rabbit and published by Adult Swim Games. It is currently available on PlayStation 4 and PC. This copy of the game was obtained via publisher and reviewed on the PC. Approximately 13 hours of play were devoted to the single-player mode, and the game was completed. There are no multiplayer modes.

Parents: According to the ESRB, this game is rated Teen and contains Violence and Blood. There is quite a lot of blood in this game, though the 2D visuals render it all a bit stylized.

Deaf & Hard of Hearing Gamers: All dialogue is subtitled, and despite the game’s difficulty, audio cues aren’t crucial. I played a few stretches with no sound and had zero issues. 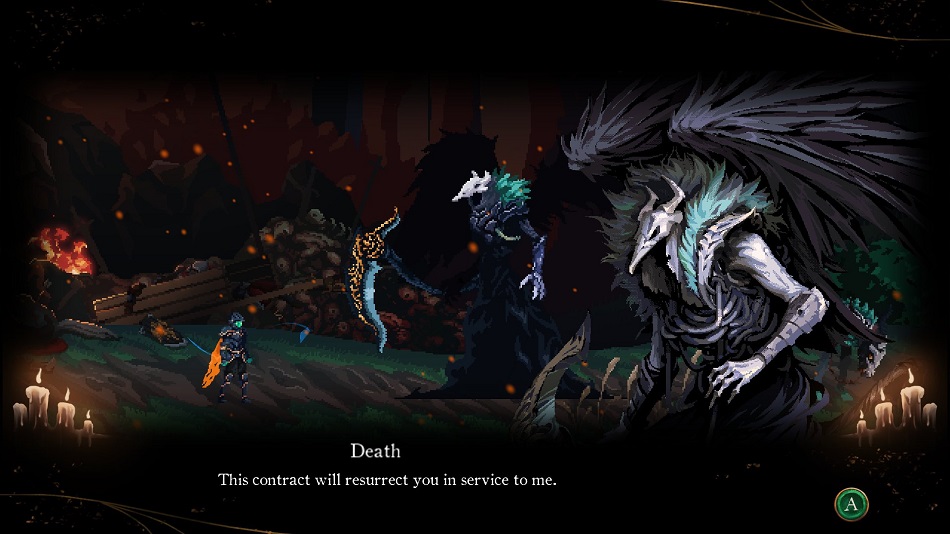 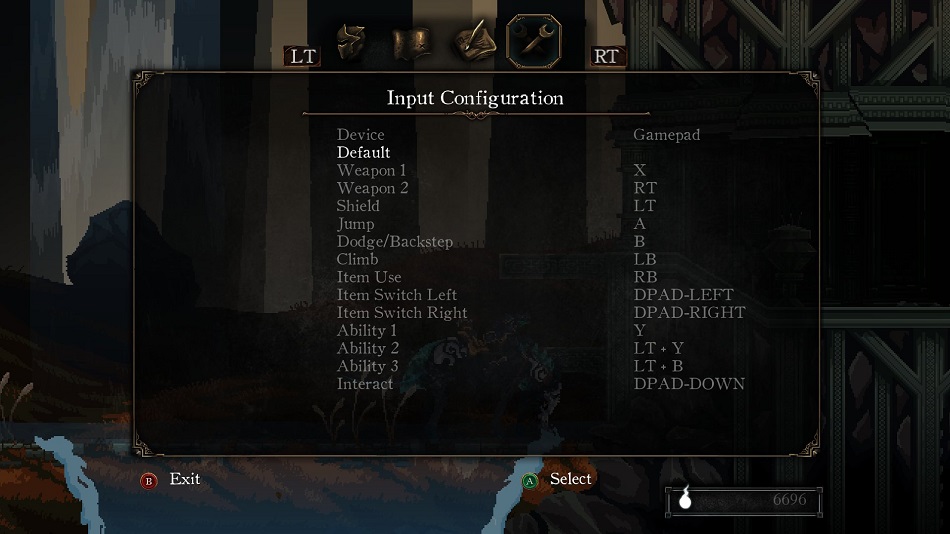