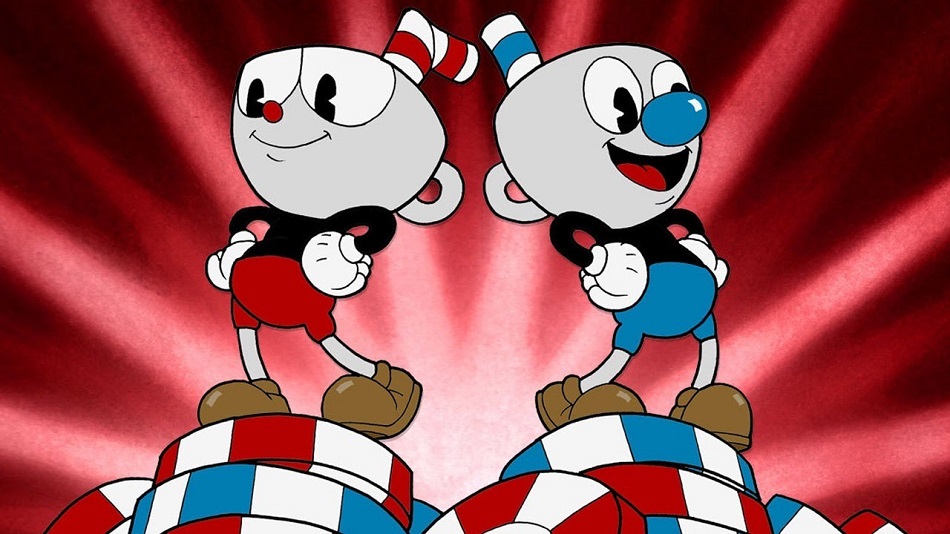 HIGH Those visuals. I mean, damn.

WTF The idea of playing this without the dash invulnerability power-up.

I’m fairly certain that StudioMDHR knew how they wanted Cuphead to look before they knew how they wanted it to play. As an homage to the rubber hose cartoons of the 1930s, I’ll be astonished if Cuphead doesn’t wind up being the most visually striking release this year. But, when it came time for the developers to pair this dazzling exterior with an actual game, the best they could come up with was a wholly unoriginal run-and-gun starring a character without a weapon.

The one bountiful idea that StudioMDHR did have was to crank the difficulty way up and cement Cuphead’s place as the new trial-by-fire amongst hardcore types. Were I a cynic, I’d note that selling the game on its challenge factor would make it immune to criticism in the eyes of many, who would just assume that anyone who doesn’t enjoy Cuphead simply sucks at it.

So before we continue, let’s just get this out of the way – yes, I have finished Cuphead on Regular difficulty. I’m sure that won’t stop the diehards from accusing me of playing it “wrong” because, I don’t know, the game under-incentivizes mastering the parry move until a sudden late-game boss required that I use it, but here we are.

Cuphead’s difficulty is, in fact, not my main criticism of it. The game is tough, often frustrating, and downright infuriating during a specific endgame battle that takes things too far. But overall, my problem with Cuphead is that it’s such an empty challenge, putting players through hell with nothing learned and nothing gained. It’s a run-and-gun without the variety of a Contra, without the energy of a Gunstar Heroes, and without the catharsis of a Metal Slug. If so much attention hadn’t been poured into the game’s visuals, I’d wonder why Cuphead even exists, and what StudioMDHR hoped to offer the genre. 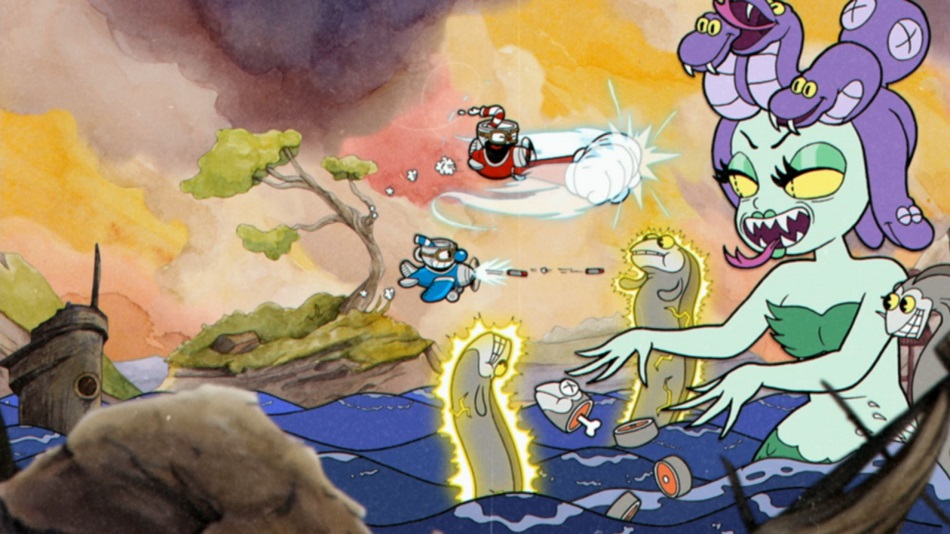 Although there are a few linear action-platformer levels sprinkled throughout, Cuphead’s campaign consists almost entirely of boss battles. While they look extraordinary, they all follow the same general principles — players must study where projectiles come from, where it’s safe to stand, how enemies will move, and at any given time Cuphead may give the player three or four different threats to manage simultaneously. So, while a pirate is shooting at Cuphead, his ship is spitting cannonballs, a chest overhead is trying to smash him, and a squid in the background is raining globs of ink down on the arena.

…In other words, it’s a bullet hell game, and that’s a design philosophy I’m rarely impressed by. It’s such a simple, inelegant means of boosting a game’s difficulty, and the messy juggling acts that are Cuphead’s bosses never feel as satisfying to defeat as, say, a single intelligent opponent on equal footing. The battles in Cuphead typically span four or five phases and often feature endlessly-respawning trash mobs. Both of those design choices would be lambasted in any other title, so why it’s okay for this game to revolve almost entirely around such encounters is beyond me.

I’ll say that Cuphead controls perfectly, but these are the same mechanics we’ve mastered a thousand times over in similar games. And so, with nothing new to add beyond the parry move that I mentioned earlier, Cuphead’s entire path to mastery is in familiarizing oneself with enemy attack patterns. This means that every new battle engaged is a clean wipe of accumulated skills, that Cuphead has no difficulty curve, and that its bosses could have been arranged in any order. This thing has the pacing of Mario Party.

It sure does look magnificent, though! Cuphead is borderline-indistinguishable from the old-timey cartoons that inspired it, and while the visuals have rightly received ample attention since the project was announced, the soundtrack is just as perfect, full of barroom pianos, barbershop quartets and big band arrangements that feel totally authentic to the era. Yet, it’s all utterly ill-befitting of a game that requires far too much concentration to pause and appreciate what the art team has accomplished. Imagine Cuphead’s audiovisual force in, say, something turn-based. It’d be perfect. 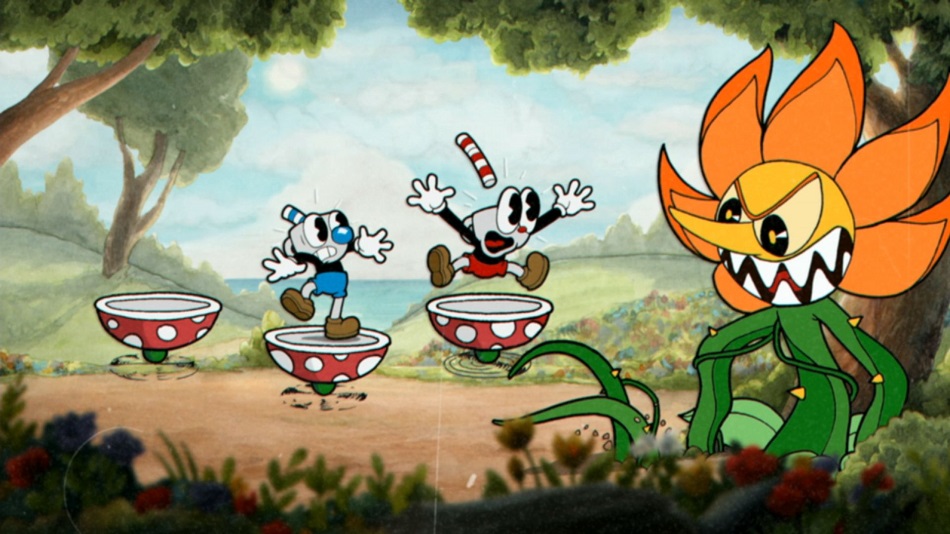 I mentioned that there’s one particularly egregious difficulty spike. It occurs near the end of the game, in which players clear a casino-themed level by rolling a die, moving across a roulette table, and fighting a new enemy for each space. It’s basically a boss rush with zero checkpoints, where all of the bosses are new. One of the spaces near the end of the board sends Cuphead back to the beginning, and I’d love to hear the developers’ justification for such a blatant waste of players’ time.

But aside from that, and the various nitpicks I’ve accumulated from spending so much time on each level (like foreground objects making it more difficult to see projectiles), Cuphead’s difficulty doesn’t sink it. There’s a decent supply of upgrades that give Cuphead new attacks or passive abilities – making him invulnerable during a dodge-dash, for example, is a total game-changer that allows players to bypass more complicated maneuvers.

Failing all else, nearly every level in Cuphead can be played on a lower difficulty. StudioMDHR didn’t just lazily shrink enemy health meters and call it a day — bosses actually use fewer attacks, and the battles sometimes consist of fewer phases. Players still only have three hit points and dying still sends them back to the beginning so Cuphead is never a cakewalk, but this mode makes it a bit less overwhelming. Admittedly, those who stick to the lower difficulty won’t unlock the campaign’s final area, but that’s the worst part of the game, so whatever. Like I said, difficulty isn’t Cuphead’s central problem.

That said, playing Cuphead on the easier difficulty reveals that the game’s challenge level is the only trick up its sleeve. Take that away, and all we’re left with is an uninspired and monotonous run-and-gun that just happens to be the most visually-striking release of 2017. Yes, Cuphead’s presentation is magnificent — it’s just a shame that StudioMDHR couldn’t come up with an interesting game to pair with it. Rating: 6 out of 10

Technical note: Do not buy Cuphead from the Windows Store. This version stops auto-saving if the player alt-tabs out, and I lost quite a bit of progress before I got to the bottom of this issue. This did not affect my score since it appears to be a problem with the platform rather than the game itself, but it’s worth noting.

Disclosures: This game is developed by StudioMDHR Entertainment. It is currently available on Xbox One and PC. This copy of the game was obtained via publisher and reviewed on the PC. Approximately 15 hours of play were devoted to the single-player mode, and the game was completed. 30 minutes of play were spent in co-op.

Parents: According to the ESRB, this game is rated Everyone and contains Mild Cartoon Violence and Alcohol and Tobacco References. Well, hey, the cartoons that Cuphead pays homage to were made before people knew how unhealthy smoking was.

Deaf & Hard of Hearing Gamers: Dialogue is text-only. Sound cues often helped alert me to enemy attacks, but the game is playable without them.

I don’t know, I feel like there’s something wrong with the logic here. Cuphead isn’t perfect. There’s not SO much to it. It’s not even that hard compared to some older titles. The issue I take with this review lies within the idea that something being a “bullet-hell” makes it uncreative and gimmicky, and that the visuals are mere makeup on top of this. Most games ARE just spatial pattern recognition, when it comes down to the “design philosophy” of their mechanics at least, with the exception of turn-based games! What a game like this does is that it actually… Read more »

“its challenge factor would make it immune to criticism in the eyes of many, who would just assume that anyone who doesn’t enjoy Cuphead simply sucks at it”
Unfortunately that’s exactly what happened when I posted a negative review of this game on steam (because even Cuphead beautiful, it’s too much frustrating). I had a lot of comments like “git gud” or something more insulting.

Just because a game is frustrating doesn’t mean it’s bad. Otherwise every platformer is a terrible game, because basically all of them are difficult. In fact it’s the opposite. Very easy games are usually the worst ones.

Infact, take away the speed from sonic, powerups and jump from mario and building from minecraft, without that they’re ‘boring and monotonous’. Just saying.

If those games had included the option to remove those things, and if doing so was worth addressing as it potentially boosted those games’ accessibility, then yeah, I suppose that would be pretty boring.

great review. Sums up my thoughts on this title perfectly.