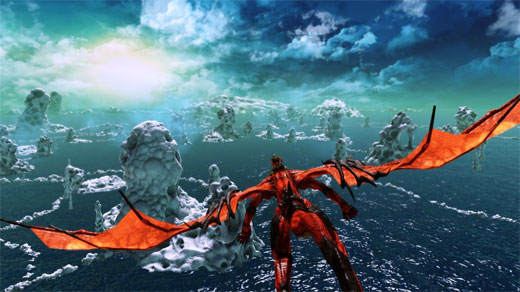 LOW So this is what next-gen graphics look like, eh?

WTF Not realizing that the game has Kinect functionality and watching the dragon perform dozens of unprompted barrel rolls.

When Crimson Dragon was met with not-especially-positive critical reception in the week leading up to its release, director Yukio Futatsugi revealed that he'd be issuing a day-one patch that would quell the game's sharp difficulty curve and make the experience more accessible.

Having not played Crimson Dragon before release, I can't comment on just how much the initial patch has helped. What I can say is that even once I'd adjusted to RPG progression that's unusual to find in a shooter, the game was still a nuisance. Crimson Dragon is frequently tough, and rarely for good reasons.

Essentially, Crimson Dragon is a spiritual successor to Futatsugi's own Panzer Dragoon series. The last game in that franchise was Orta. I haven't played it in roughly a decade, but I very distinctly remember how smooth and elegant it felt; the rare challenging game that was never challenging to understand. By comparison, Crimson Dragon, despite bearing many surface-level similarities, is wild and unruly.

As a rail shooter, it places a much higher value on grinding than skill since boss battles all have time limits attached. For example, a player could theoretically perform brilliantly and still lose simply for not being able to dish out enough damage before the clock runs out. It's strange, and it takes some getting used to.

The dragon itself whips, careens and lurches about each level in such a way that very nearly negates movement controls. Players can vaguely direct the dragon's flight path, but it's slow and unpredictable. The very act of dodging enemy projectiles is so troublesome that I frequently opted to just fly in circles around the edge of the screen, with roughly equal success. Avoiding obstacles and nabbing collectibles was often more trouble than it was worth.

The camera fares even worse. Gone is Panzer Dragoon's clever 90-degree pivot system, which gave players precise control over which direction they were facing at any given time. In Crimson Dragon, players are at the mercy of a largely automated camera that's just as erratic as the unpredictable paths themselves, and what little input one has over it is, as with movement, impractically slow. This effectively sinks the game's occasional transitions to free-flight areas, particularly during key boss battles. Getting off of the rails should feel great, but the inability to fluidly change direction makes these segments just as much of a hassle as everything else.

In bizarre contrast, the reticle control is loose and imprecise to the point that I'd consider calling the game unplayable if many of the weapons didn't use the same lock-on and homing system that was found in the Panzer Dragoon games. Thankfully it does, but much of Crimson Dragon still feels like an exercise in wildly flailing about.

As mentioned earlier, the game places major emphasis on RPG-style progression, and putting the time in makes a difference. The available dragons perform noticeably better after gaining only a few levels, the secondary weapons all handle differently and add unique flavors to combat, and investing in AI-controlled teammates is key. But even when the game becomes less difficult, the unfortunate truth is that it's just dull.

Basic enemy types are practically in the single digits, and the developers waste a number of unique-looking environments on predictable attack patterns and repetitive objectives. Completing secondary goals for higher scores would be appealing in a better game, but here, they pull Crimson Dragon into tedium.

That the game openly invites comparisons to Panzer Dragoon obviously doesn't do it many favors, but Crimson Dragon does retain two key qualities that its spiritual predecessors shared.

The first is that Saori Kobayashi has been brought back on board as the composer, and her work here is sweeping and gorgeous. Crimson Dragon's soundtrack will assuredly wind up being one of my favorites of 2013, and is the best thing about the game by a mile.

The second is that it shares Panzer Dragoon's eye-opening art direction, though it's very nearly undone by jagged modeling and awful particle effects while the game struggles to run at a consistent 30 frames per second. That Crimson Dragon was originally an Xbox 360 title is a non-factor, because it looks poor even by last-gen standards. Why Microsoft would elect to launch this on a brand new console which should represent a massive leap forward in graphical prowess escapes me.

In fact, despite having an industry veteran at the helm, Crimson Dragon feels like a cheap product from beginning to end. Most of the extremely bare-bones story is told via narration over static concept art, and all of the NPC characters are depicted as inanimate holograms. Even the Kinect functionality is negligible to the point that I'm curious as to why it was retained at all. I'd recommend that players turn the Kinect features off altogether, lest they suddenly lean left or right and mistakenly send their dragons into ill-timed barrel rolls.

Crimson Dragon is clumsy, frustrating and often downright hideous. I realize that the Xbox One's launch lineup was pretty underwhelming, but even those new owners desperate for software to play on it should keep Crimson Dragon low on their lists. Rating: 3.5 out of 10

Disclosures: This game was obtained via paid download and reviewed on the Xbox One. Approximately eight hours of play were devoted to the single-player mode, and the game was completed. There are no multiplayer modes.

Parents: According to the ESRB, this game contains violence and blood. Various silly-looking creatures shooting fireballs at one another is pretty much the extent of it, and it's depicted in a very unrealistic and arcade-like manner, with no real gore and minimal blood effects (if any at all). A few very mild profanities are thrown around here and there. There's nothing particularly offensive about any of it. I'd let children play it.

Deaf & Hard of Hearing Gamers: All dialog is subtitled. Important in-game events are always accompanied by visual alerts, and a radar pinpoints all nearby enemies, so sound cues really never play an vital role at all.