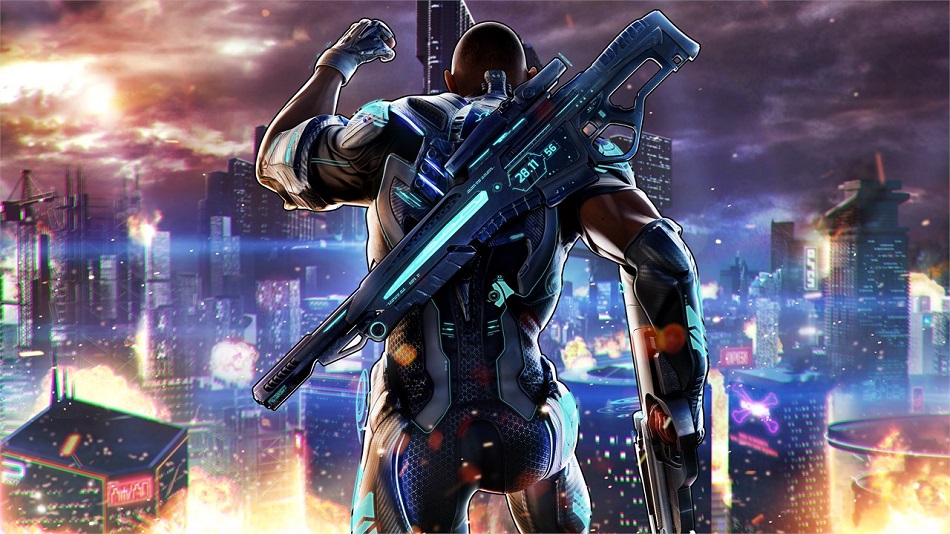 We may never know the full story behind Crackdown 3’s legendarily troubled development cycle, but I’d think a project that took this much time and effort to materialize would come out looking, I don’t know, a little more ambitious than this?

A last-gen game by every measure except its release date, the only thing preventing me from calling Crackdown 3 a copy-and-paste job is that the previous game in the series already demonstrated just how (and on a critical level, I do not use this word lightly) lazy a sequel can be, recycling the same sandbox environment of its predecessor, tossing in some zombies, and calling it a full-priced follow-up. Crackdown 3, to its credit, is actually set in a new city this time. So, hey, baby steps.

The original Crackdown felt fresh because it was one of our first exposures to the superhero sandbox genre, and possibly the first not to carry the stigma of the movie tie-in. The market has since become so cluttered with open-world collect-a-thons that I’m amazed developer Sumo Digital assumed that the series needed so little tweaking. The obvious recent comparison is Insomniac’s excellent Spider-Man, but I don’t even need to punch that far below the belt. Since Crackdown’s release, franchises like Infamous and Just Cause have improved on the formula and gone out of style themselves. Flinging oneself over rooftops just isn’t as effortlessly cool as it once was.

Our setting is New Providence, an island city that’s been taken over by an assortment of eccentric villains with thinly-defined motivations. Playing as one of thirteen representatives of the Agency (one of whom is Terry Crews, and twelve of whom are not), it’s our job to create chaos within their regime, dissolving their smallest bases of operation first and gradually working our way up to the top. 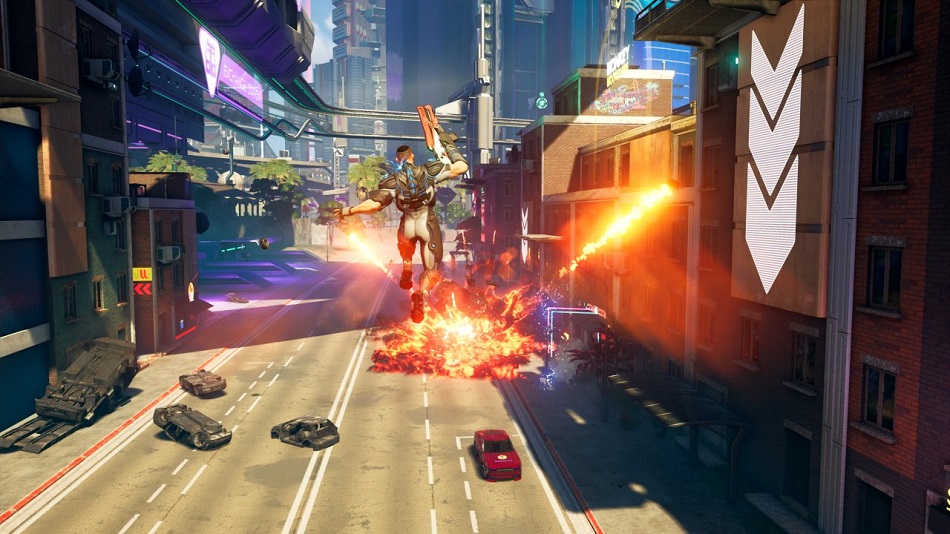 Although Crackdown 3 looks like an upscaled Xbox 360 game – the buildings are all just boxes with windows on them, and no effort has gone into making New Providence feel thriving and alive – I will grant that the city’s layout is pretty cool. The architecture is nicely futuristic, and I like that the buildings get taller and more intimidating as players venture deeper into the island. In the original Crackdown, I accidentally stumbled upon the endgame after only two-thirds of the campaign due to a lack of direction, but here, it’s easy to tell where the final encounter will be and what needs to be done to reach it.

As always, though, that process takes the form of a checklist – capture X amount of bases, climb Y amount of towers, sabotage Z number of processing plants, and so forth. There’s nothing the player can do in Crackdown 3 that they won’t be doing about a dozen more times, and the climactic encounters against the rogues’ gallery are surprisingly unmemorable – hell, a few of them pilot high-powered versions of the same damn mech suits we’ve been fighting the entire game. Even the final boss is only remarkable for its location and not the trite design of the battle itself.

Sumo has wisely kept the skill system from the previous Crackdown games, wherein the agent’s abilities improve as the player makes active use of them. As always, the best part of Crackdown 3 is collecting agility orbs, which are sprinkled across the rooftops and boost the agent’s speed and jump height. Likewise, fighting with guns, explosives and fists will make the agent more proficient in those categories, and for anyone weird enough to want to use vehicles in a game where one can literally bound over entire buildings, the driving skill is there, too. It’s an organic system that’s held up well.

What hasn’t held up is the combat, which feels flimsy, messy and unsatisfying. It’s borderline impossible to hit anything without the targeting system, which isn’t a bad thing in and of itself, but the process of delicately picking off one soldier at a time is at odds with combat scenarios in which the agent is surrounded by dozens of enemies in every direction — even above and below — and many of them firing from outside of the player’s lock-on radius. The compass and damage indicators do a poor job of highlighting threats, and Crackdown 3’s unusually vibrant colors actually make the game difficult to read in busy, stressful situations. 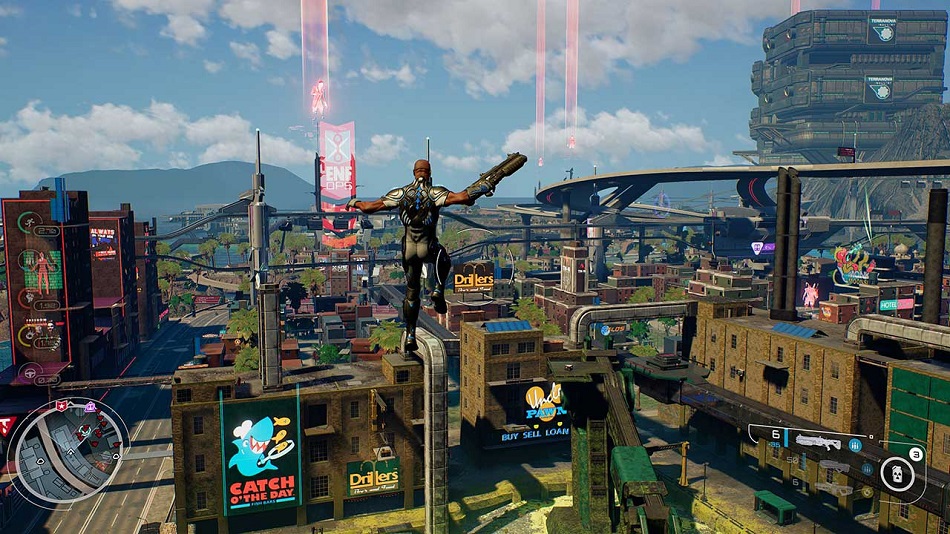 When the game is tough, it’s never tough in clever ways, as the AI is borderline nonexistent. Sumo’s method of ramping up the difficulty is just to add more – more soldiers, more drones, more explosions, more everything. Overcoming intense combat scenarios is often less about monitoring one’s health meter and more about regaining control as the agent is getting bounced around like a pinball. Occasionally one of the gang leaders will temporarily shut the city down and force the player to survive waves of enemy spawns, a tactic that’s particularly annoying when it happens in the middle of a mission.

This weak combat design certainly isn’t enough to support Crackdown 3’s competitive multiplayer mode. Developer Elbow Rocket, to whom the mode was outsourced, pulls some nifty tricks with destructible environments (earning it the title Wrecking Zone) but they don’t elevate the humdrum combat or the mere two unimaginative game types (deathmatch and territories) that players are forced to duke it out in.

Perhaps the most damning thing I can say about Crackdown 3 is that it even manages to make Terry Crews boring. I assume his presence is a holdover from an earlier version of the game with significantly more personality, because I don’t know who would hire one of the world’s most outsized, charismatic actors and then give him this little to do. Even his one good line – “Fuck you, gravity!” – loses its luster quickly because it’s one of maybe five barks his character gets.

With Xbox Game Pass, Microsoft is angling to move the industry in the direction of the subscription-based model that’s overtaken home video. While that’s not a bad idea, Crackdown 3 is the gaming equivalent of the phrase “dumped on Netflix.” This is a mediocre release, and whatever excuse we make for it – that it’s practically free, that we expected no better, or that it’s following one of the worst sequels of all time – doesn’t make it look any less out of date.Rating: 4 out of 10

Disclosures: This game is developed by Sumo Digital and published by Xbox Game Studios. It is currently available on Xbox One and PC. This copy of the game was obtained via paid download (through Xbox Game Pass) and reviewed on the PC. Approximately 15 hours of play were devoted to the single-player mode, and the game was completed. One hour of play was spent in multiplayer modes, a separate app titled Wrecking Zone.

Parents: According to the ESRB, this game is rated Mature and contains Blood, Drug References, Sexual Themes, Strong Language and Violence. There are some minor, easily-missed references to sex, drugs and alcohol, mostly in street signs and NPC dialog. Though the violence is plentiful, none of it is particularly graphic. The frequent F-bombs are primarily what earn this game its rating. If profanity isn’t a concern, Crackdown 3 is relatively tame.

Deaf & Hard of Hearing Gamers: Subtitles are available for major dialogue. They don’t cover incidental chatter, but none of that affects Crackdown 3’s playability. Collectible orbs emit noises that make locating them easier, so players who can’t hear them will be at a slight disadvantage. On-screen threat indicators are also vague and confusing. 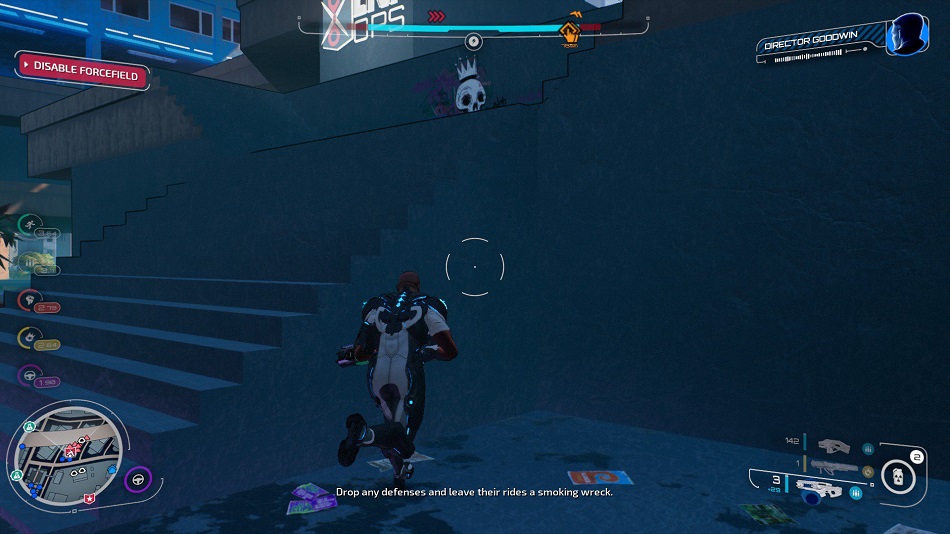 Remappable Controls: This game offers fully remappable controls for keyboard and mouse, but not for controller. 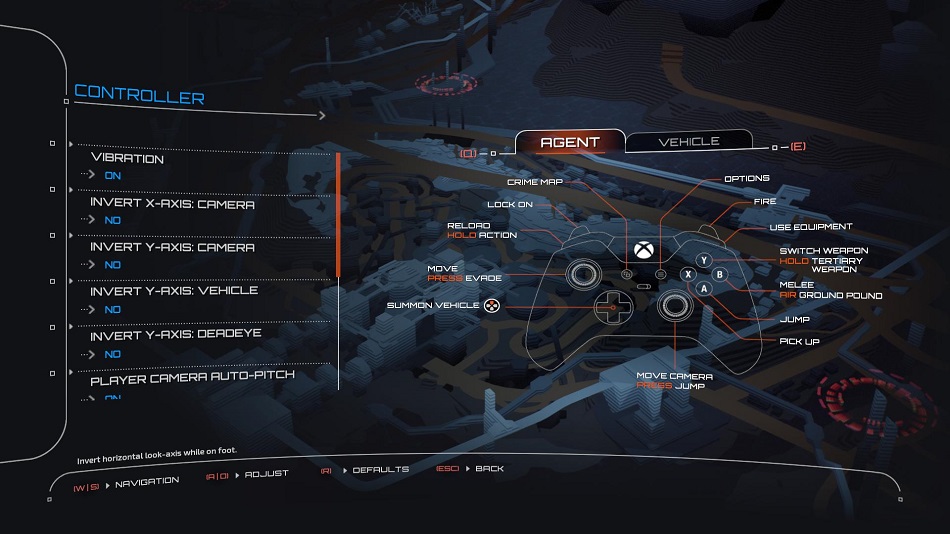 Great job on your review!

The first crackdown was nothing short of amazing.

I’ve been on to the third game since the first trailer came out.

At least now I know what I’m getting into when I pick up a Crackdown 3.

I kinda remember Agents Of Mayhem from this game.

The biggest mistake Microsoft made with Crackdown 3 was releasing Crackdown 1 upgraded in 4K for free beforehand. I played the hell out of Crackdown 1 again, loved it, and yeah even though Crackdown 3 is free I played it for about 20 minutes, could tell the first one was better, than deleted it immediately.