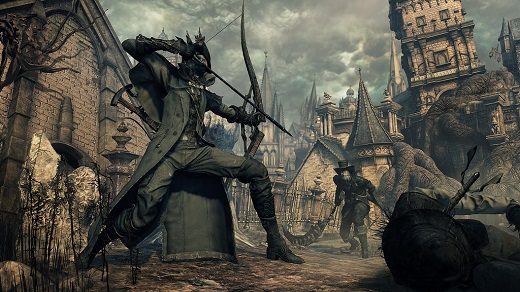 HIGH The final area channels Lovecraft in a big way.

LOW The optional boss is a repeat from the main campaign.

WTF Slaying a gruesome monster and then having a pleasant conversation with its severed head.

The Old Hunters gave me exactly what I want from a Bloodborne expansion: to be horrified, beaten into submission, and ultimately empowered—in that order. Speaking as someone who's finished the base game four times and earned the platinum trophy, The Old Hunters constantly took me by surprise and left me physically shaken on more than one occasion. But as always, the struggle is worth it.

I need to elaborate on the "physically shaken" bit, though, because I can't overstate how obscenely brutal The Old Hunters is. I know that sounds redundant, so let me be clear—I've done everything in every Souls game to date (up to and including the Frigid Outskirts) and a couple of the bosses in The Old Hunters rank among the most potent challenges that I've ever seen From Software concoct.

If casual Bloodborne fans exist, I can't see them having the excruciating level of patience needed to study and outwit some of these attack patterns. But with the knowledge that The Old Hunters is for hardcore players only, and even by the standards of a game tailored specifically for hardcore players, this expansion is still a valuable addition to the Bloodborne canon.

Set in a devilish alternate reality where "blood-drunk" hunters feed their lust for carnage, The Old Hunters isn't simply a bonus dungeon. It delves into the workings of the Healing Church and elaborates on some of the characters name-dropped (but never seen) in the vanilla game. Information is sown cryptically, but those skilled enough to take this DLC on are likely well-accustomed to digging for details and reading between the lines. There's a lot to find here. Plus, those who dug Bloodborne's Lovecraft influences are in for a treat when they hit the final area, which is a massive throwback to one of the author's most famous stories. The Souls creators taking on cosmic horror remains a perfect match.

Despite its connections to the central mythology, this expansion still feels wholly fresh, barring one optional boss who's a rerun from the main game. It's full of distinctive visuals—some of it beautiful, some of it disgusting—and the enemy behavior is unique enough that The Old Hunters constantly requires players to adjust to new threats around every corner. Enemies now attack with turrets and timed explosives, and the large axe-wielding monsters in the opening level will be a sharp gauge for whether players are under-leveled for this new content.

Ultimately, though, it's the new bosses that will make or break this experience for almost everyone who plays it. There's no real "trick" to any of these battles; they're just that fast, that powerful, and that reliant on players learning their cues and developing appropriate counters. Video strategies will surface over the coming weeks, but I don't think there's any getting around the fact that overcoming these bosses requires genuine mastery. I'm glad no one was in the room with me while I was fighting Lady Maria, but actually beating her with some of the purest skill I've ever honed in a game gave me the kind of intense adrenaline rush that only From Software seems able to provide.

There are quite a few new weapons floating around in The Old Hunters, but while some of them seem neat (such as a buzzsaw on a stick) their presence underlines one of Bloodborne's biggest flaws—the lack of flexibility regarding experimentation. Upgrading weapons takes a lot of finite resources, and it's virtually impossible to keep more than a handful up to par. While I'd love to report on how useful the Amygdalan Arm or the Church Pick are, I wound up staying with my old standbys. Given how tough this DLC is, I imagine most players will do the same.

(Another flaw? One of the new sidearms is a gatling gun. I fully upgraded it, and it was still completely useless. How do you screw that up?!)­

Also, while the new area isn't terribly difficult to access, anyone who's completed the main game (and thus been forced to start over) will likely have to play through the whole thing again just to build a character who's capable of taking this DLC on. I wish Bloodborne had been given a post-game free-roam option; it would have made The Old Hunters just a bit more accessible, not that From wanted it to be anything of the sort.

That said, it's a testament to how expertly-crafted this DLC is that I can replay the base game in preparation, still get my ass kicked to an embarrassing degree, and ultimately walk away feeling satisfied and as capable as ever. The Old Hunters is definitely more "hardcore" than anything From Software has cooked up in recent memory, but those who want this know who they are, and for that select group, The Old Hunters is everything they signed up for and more. Rating: 8 out of 10


Disclosures: This game was obtained via publisher and reviewed on the PS4. Approximately eight hours were devoted to the single-player mode, and the game was completed. Online features were enabled at all times.

Parents: According to the ESRB, this game contains blood and gore and violence. Blood is such a major component of this game that it's right there in the title, and this DLC in particular really cranks the gross factor up to eleven in spots. There's no foul language or sexual content, but this is not a game for kids.

Deaf and Hard of Hearing: Any disadvantage in Bloodborne is a big one, and not being able to hear sound cues can make it that much more difficult to locate enemies in a game that's already both dark and punishing. Subtitles are available.

I don’t know if I would call myself a casual Bloodborne fan, but I have had a difficult time getting through the first area of the DLC as a lvl 68. I encountered that first boss only once, and it went horribly wrong. Time to grind I guess… a very informative review as always, Mike.

When we got the code for review, Sony’s recommendation for suitable level was something like 65.

I think that’s WAY off.

I started around level 95, and I felt like even that was too low. I had to grind for a while, and I finished at around level 115, give or take.

This content is really, really hard and my best advice to anyone (as much as it pains me to say it) would be to grind.