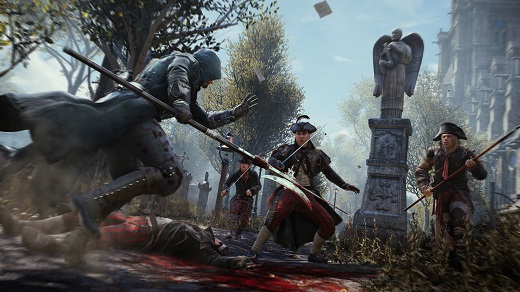 WTF The recurring quirk of hitting the map button and going to the IE app.

I hold myself to the personal standard of trying to finish nearly every game that I review. Not only does that give me the fullest possible perspective in most cases, but it illustrates how fundamentally broken a game would need to be for me to throw in the towel early.

With this in mind, I made it about a third of the way through Assassin's Creed: Unity before calling it quits.

Everyone who plays Unity seems to walk away with a different horror story, and we're getting a new meme out of its technical problems every day, from characters with no faces to chatty NPCs spawning in the wrong places and interrupting cutscenes. Sadly, my own story is nowhere near as amusing—it begins with a poor framerate, it awkwardly stumbles along for a while, and ends with me declaring Unity unplayable and removing it from my Xbox One.

And to think that we threw such a fuss when the devs announced that Unity would be locked at 30fps!

I cherished the precious few moments when it held 30fps for more than a second or two. At its most dependable, Unity floats just above 20. In large areas (which is most of the time given that it's a sandbox game) it dips to around 15, while often diving headfirst into the single digits. I'm a stickler for a high framerate and I realize that my attitude does not extend to every console gamer, but this goes far beyond personal preference. No one could play the Unity that I played and persevere to the end. This game is simply not fit for retail release.

I've read other reviews of Unity, and I've spoken to a few of the people who have written them. I've shown them the footage I captured of Unity running like a slideshow. Some claim that they never experienced that issue on a similar scale. I believe them and know that whatever may be causing it is not universal. I also know that I'm not the only one having these problems.

As far as I'm concerned, this the most severe instance I've ever seen of a triple-A title being utterly unplayable at launch. It's galaxies beyond something like multiplayer functionality being hampered on day one—that issue would be understandable, given how difficult it is to test mass online features pre-release. No, Unity's technical inadequacy on standardized hardware affects and spoils everything about it. No publisher with Ubisoft's resources and experience could have ever believed that this game was ready for release. It's a broken product.

While the detestable "ship now, patch later" sensibility means that sometimes games do become better at some point after launch, I can only speak to what my experience was with it now. However, framerate isn't the only thing wrong with Unity. If and when it ever becomes stable, it will simply be elevated to being the least-inspired entry in a series already widely ridiculed for being uninspired.

While I'd hoped that the franchise was beginning to break out of its slump after last year's lovely Black Flag, I'm sad to say that Unity goes right back to the same old routine, dropping us into a setting (Paris during the French Revolution) that's functionally interchangeable with every other city we've gotten so far, and framing it with the usual modern-day shenanigans that don't seem to have anywhere to go at this point.

The game's predictability is outweighed only by its datedness. I can't tell if Unity is less mechanically refined than its predecessors or if the series is being overshadowed by titles like Middle-Earth: Shadow of Mordor that take obvious steps to improve the formula. If nothing else, it's time for Ubisoft to swallow their pride and copy Arkham combat like every other action game is doing, just so we're no longer stuck with floaty swordplay that always feels a half-second behind my control input. They should also take a few cues from any game that does stealth well, and implement a cover system that works on more than half of the surfaces that I try to stick the protagonist to.

Unity's primary ambition, of course, is its scope. This is Ubisoft's most thorough and well-researched historical location yet, but the map of Paris is barely visible underneath the hundreds of icons marking collectibles, co-op missions, and various novelties. Ten development teams reportedly worked on this game. Ten! What an astonishing amount of effort to be wasted on a game that barely runs without choking on itself.

And that is, of course, what it all comes down to. The core game driving Unity, based on the third of it that I was able to force myself through, is such an unenthusiastic cash-grab that if and when the game is finished, I'll still have little interest in it—but the fact remains that this game is not finished. Ubisoft should be ashamed for putting it on shelves as-is. I beg every person reading this to not buy it, and to send a message to publishers who want to ship now and patch later. We can't keep putting up with this. Rating: 2.0 out of 10


Disclosures: This game was obtained via publisher and reviewed on the Xbox One. Approximately five hours of play were devoted to the single-player mode, and the game was not completed. No time was spent with the multiplayer modes.

Parents: According to the ESRB, this game contains blood and gore, intense violence, sexual themes, strong language and use of alcohol. It's relatively standard Assassin's Creed fare in that it's violent and mature but tastefully handled and never gratuitous. I wouldn't take much issue with older teens playing this.

Deaf & Hard of Hearing: Subtitles are available. There are stealth sections, but there's plenty of visual feedback.

OMG For a second I thought I’m reading complains of an old woman for her new shoes, she can’t and won’t use the shoe but still complains about it’s color. Now this review, Gotta admit you really showed ’em mr.Suskie. It’s a full review but does not include anything about the characters, storyline, side quests, online ((things)) , etc. (FULL REVIEW). First of all, as an experienced writer AND (hopefuly) gamer, you certainly know that the quality of endings and story depends on one’s way of think, it’s not about reviewers telling ((don’t buy this piece of crap)) or more… Read more »

Rest assured that I won’t buy it. Nor will I buy any other AC game.

If I remember correctly, I played Unity right after its launch, when a friend bought it for his PS4. While I still like the historical background and believe some of the gameplay mechanics had a few advances (like the ‘quick parkour up and down’ features), I saw some other things that disturbed me, most of them related to Ubisoft’s greed. When I played it, the game already had missions which were only accessible through DLC; it was really frustrating to travel to some markers in the map, only to discover that it was a DLC-only mission, or a mission that… Read more »

loved the high and low point,this is for what i like read about games,so funny.