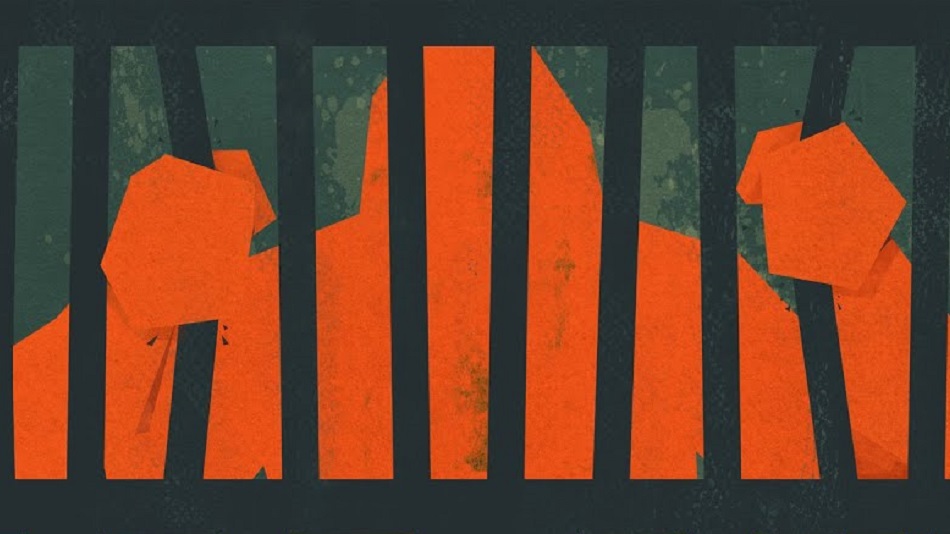 HIGH When the lights go out.

WTF A sneaky twist at the end of the bonus level.

By simple virtue of what’s actually happening on screen, Ape Out is one of the most gruesome games in ages. Its central mechanic is the act of throwing humans against walls so hard that they pop like water balloons. It’s a game about frosting the environments with the blood, guts and appendages of one’s enemies, yet it never feels gratuitous.

Presented in stark colors and crude animations reminiscent of Saul Bass’ legendary title sequences and soundtracked with dynamic jazz drumming, Ape Out is just too damn stylish to feel connected to reality in any way. Blood is often bright and neon-colored, and most of the “sound effects” are actually just percussive instrument noises representing gunfire, crushing bones, and the galloping of the titular gorilla.

Ape Out feels less about going on killing sprees and more about creating freeform art. Completed levels look more like Jackson Pollock pieces than crime scenes. Maybe that’s even more perverse than if the game has been presented matter-of-factly, but here we are. 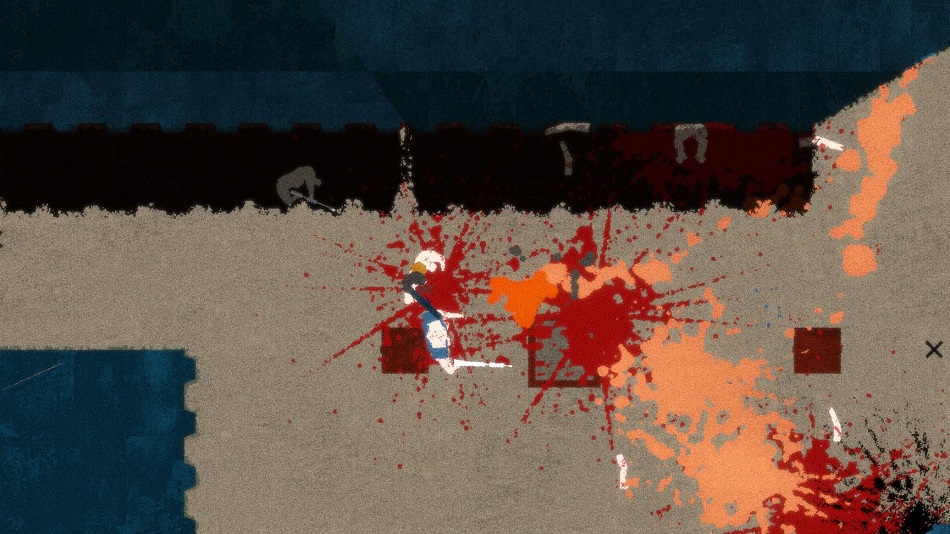 Ape Out belongs to the Hotline Miami school of top-down murder simulators, this one focusing on an escaped primate. That really is the entirety of the plot – there’s no dialogue or exposition of any kind, and any gleaned themes regarding environmentalism or animal rights are probably there by coincidence. We’re given a couple of biomes to escape from – all presented as vinyl albums with A- and B-sides – and off we go to sprint from one side of the level to the other, no questions asked.

The simplistic visual style makes it easy to distinguish enemies, which vary in both equipment and behavior. The tiny, pistol-wielding types will begin to cower and run away if the ape gets too close, while the heavily-armored shotgunners have no qualms about taking the animal on directly. Players can shove enemies away or grab them, commandeer their weapons for a shot, and then use them as meat shields.

Every kill in Ape Out feels satisfying, from the cymbal crash to the screen shake to fresh splatter of blood across the floor. But the developers – a small, unnamed team led by Gabe Cuzzillo – realized that Ape Out’s status as an empowerment title shouldn’t exempt it from offering a serious challenge. The ape can only take three shots before it’s down, and in a scenario where the enemies all have ranged weapons (but the ape doesn’t) that’s a fierce imbalance to overcome. 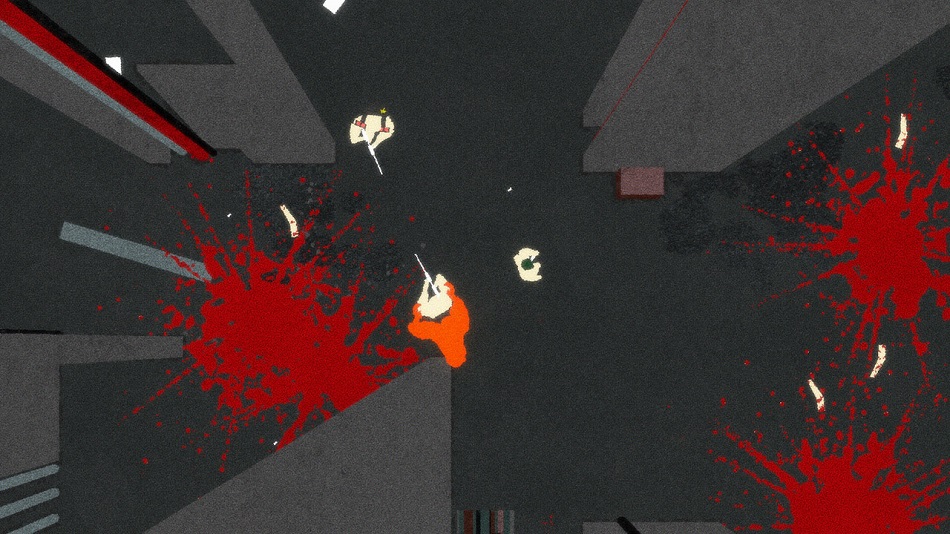 Adding to that, the game is depicted in a harsh one-point perspective that makes it impossible to see outside of whatever room the ape is currently in. While levels always maintain the same basic shape via rooms and hallways, the details are procedurally generated with each respawn, meaning players can’t rely on memorization to get through — and that’s kind of the point. We’re an escaped animal, not a master tactician. Ape Out is about winning via instinct.

There are those who will criticize Ape Out for its repetition, and they’re not necessarily wrong. The ape doesn’t learn any new moves throughout the course of its four-world campaign, and while the different biomes offer small variations on what actions players can perform – throwing a soldier out of a window to his death several stories below in the high rise level never gets old – we’re basically doing the same thing over and over for the four or five hours it takes to complete Ape Out.

In light of this, it’s a testament to how good Ape Out looks and how satisfying it feels that it never once got old for me. It’s also a brilliant show of confidence on the part of Cuzzillo and his team not to weigh such a simple, elegant idea down with much unnecessary baggage. Not only is Ape Out primed to be one of the most stylish games of the year, but it’s a strong argument for how far style can elevate material. Rating: 8 out of 10

Disclosures: This game is developed by Gabe Cuzzillo, Bennett Foddy and Matt Boch, and published by Devolver Digital. It is currently available on PC and Switch. This copy of the game was obtained via paid download and reviewed on the Switch. Approximately five hours of play were devoted to the single-player mode, and the game was completed. There are no multiplayer modes.

Parents: According to the ESRB, this game is rated Teen and contains Blood and Violence. They went easy on this one. While there’s no sex or profanity, the violence, though stylized, is extremely brutal. Humans are constantly smashed into bloody pieces, and players can even pick up and throw dismembered body parts. Be careful with this one.

Deaf & Hard of Hearing Gamers: There’s no dialogue, written or spoken. Although music is a major component of Ape Out’s presentation, the game is perfectly playable without it. It’s fully accessible.