Get Out of the Room 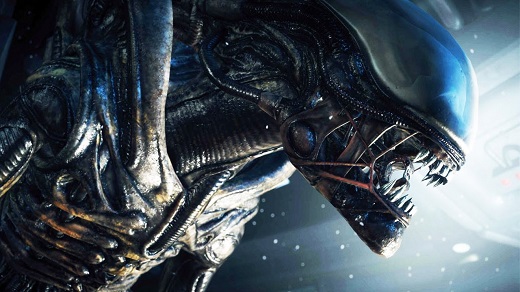 HIGH Everything involving the alien.

LOW A lengthy midgame segment that has nothing to do with the alien.

WTF Reuniting the original cast and then walling them off for preorders.

The Creative Assembly's Isolation is the first modern video game to use the original Alien film as its inspiration.

The premise is that there's only ever a single xenomorph hunting the player at any given time, and while flamethrowers and improvised weapons can be used to briefly scare it off, the creature cannot be outright killed. This approach restores terror to a creature design that's grown banal in recent years, and makes the alien frightening both off-screen and on.

Frankly speaking, Alien: Isolation is a one-trick pony. Fortunately, the trick is magnificent, which is a relief given that the game has over 20 hours to fill.

Isolation delves into the previously-untold story of Amanda Ripley, daughter of Ellen, whose search for her missing mother takes her to a remote space station that's recently been terrorized by the monster. The station itself is a triumph of production design, meticulously recreating the primitive computer monitors and push-button mechanisms seen aboard the film's Nostromo. I could gripe about some poor texture quality and inconsistent lighting effects, but this is one of those cases in which artistry trumps technology.

But, atmosphere ultimately plays second fiddle to the alien itself. The vast majority of its behavior is unscripted—it can drop out of air vents at nearly any time, and players are only alerted to its presence by listening for sound cues and keeping one eye on a faithful-looking motion tracker. Since the alien can't be killed, players spend the vast majority of the time sneaking about, staying out of its line of sight, and even holding their breath (with the left trigger) in certain extreme cases.

We've recently seen a resurgence of this non-confrontational approach to horror in titles like Amnesia and Outlast, and it hits a peak with Isolation. I played the game on the highest difficulty, and I'd recommend the same to anyone with the patience. It heightens the alien's senses to the point that no hiding spot is truly safe, as I discovered when the alien ripped open locker doors, followed me into vents, and pulled me out from under tables whenever I was being just a hair too clumsy. Every time I picked up movement on the radar, I'd immediately crouch and push forward with attention paid to potential cover and escape methods should the alien come tumbling out of the ceiling. It's constant, unbearable terror, and it's beautiful.

Alien attacks are instant death and checkpoints tend to be infrequent. While that'll lead to some tough lessons, I never died unfairly. The alien's AI is harsh but consistent, and figuring out how it functions and constantly applying that to new level layouts is Isolation's masochistic joy. 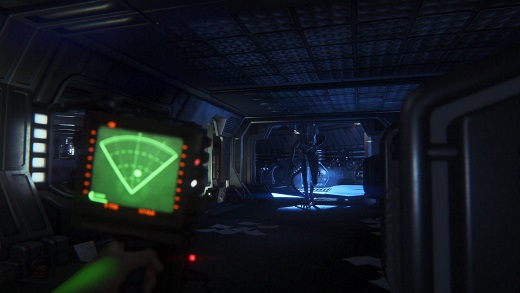 The randomness of the encounters also lends the game an emergent quality largely absent from modern, scripted-to-the-pixel design. Everyone who plays Isolation will walk away with a different story about how they got impaled just as they were inserting their card into a save station, or how they hid under a hospital bed for five minutes until finally making a run for the nearest elevator, or how the alien itself rescued them from gun-wielding human opponents. (It's possible to deliberately sic the alien on other enemies, a fact that makes me squeal with delight.)

For me, the alien bits never grow tired, but the Creative Assembly must have lacked the confidence to craft a tight experience exclusively about the xenomorph. As such, Isolation runs too long by clocking in at least 20 hours, frequently dipping into non-alien diversions that they're nowhere near as adept with.

This is first evident during the opening missions. It's around an hour before the alien is even glimpsed, two before it's seen in-engine, and three before the first official confrontation. This dearth of excitement in the first act draws attention to the poor character animations and lackluster voice acting. Furthermore, where a Half-Life or a BioShock would drop players into an environment and let them sort out the details, Isolation conjures up a character whose only purpose is to explain what's going on and then die as soon as the tutorials are taken care of.

Then, after the alien shows up and Isolation kicks into high gear for an impressively long time, there's a jarring segment in the second half when the alien disappears for a couple of hours and attention is directed towards rogue androids that have taken over the station.

With dead eyes and crash-test dummy mouths, the androids are suitably freaky, but their predictable AI quickly makes them mundane when they're the primary adversaries for such a long stretch. During these times, Isolation feels like a straightforward shooter with unwieldy weapons and enemies that are extremely difficult to kill.

Other threats arise in the final act, and the more the Creative Assembly drags the experience on, the more tedious it gets. Amanda's objectives are rarely more complicated than to go fetch the yada-yada to get the whatever-thing operational, and by the last few missions, the number of convoluted obstacles and arbitrary diversions becomes a parody of itself. It's great that the developers wanted to give their game some "value" by making it longer than one might expect from the Horror genre, but the padding takes away from its impact. Isolation needs to be much tighter, and more focused on what it does well.

I don't want that to deter anyone from playing Isolation—truth be told, I think it's one of the year's must-play releases for those with as much adoration for the original Alien film as I have. The cat-and-mouse between Ripley and the xenomorph has been perfectly translated to an interactive format, and when Isolation capitalizes on that—which, I hasten to add, is a great deal of the time—it's perhaps the scariest game I've ever played. However, that strength only underlines the Creative Assembly's unfortunate inability to edit themselves.

I recommend Isolation, but not as strongly as I wish I could. Rating: 7.0 out of 10


Disclosures: This game was obtained via publisher and reviewed on the PlayStation 4. Approximately 22 hours of play were devoted to the single-player mode, and the game was completed. There are no multiplayer modes.

Parents: According to the ESRB, this game contains blood, strong language and violence. Harsh profanity is peppered throughout, and the game is full of bloody deaths via alien attacks and gunshot wounds. It's also unbearably scary at times, so keep that in mind. It's relatively tasteful and never extraneous, but this one's probably only for older teens at the absolute minimum.

Deaf & Hard of Hearing: Sound is an absolutely central component of the game, not just in terms of atmosphere-building, but for being able to discern where the alien and other threats are, since on-screen indicators are deliberately limited. I hate to say it, but those who struggle with hearing probably won't be able to play this.