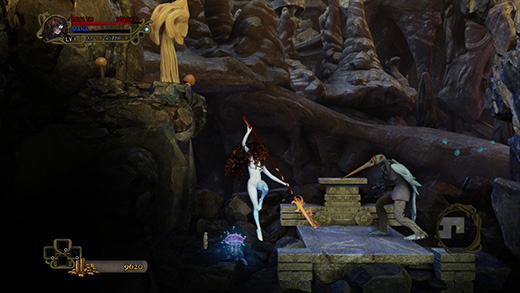 WTF Another side-scrolling action game with no d-pad control? Seriously?

and spent the next several hours fervently battling the most severe performance issues I've experienced in a game published by Atlus. Confident that the instability was the result of a shoddy port job, I bought, tested, and completed the PC version, like the world-class journalist that I am.

By doing this, I learned two things. First, that the choppiness of the Xbox 360 version is indeed the result of lousy optimization. Second, I found that even in the best environment, Abyss Odyssey is promising, but not really worth the trouble.

The game is a semi-roguelike that mixes procedurally-generated levels with combat more akin to a fighting game than a brawler. Developer ACE Team has also spun some of its native Chilean folklore into the story, and the visual style is based heavily on the Art Nouveau movement. It's an elegant and confident look that gives a solid first impression, and some of the background work is so stunning that I had a hard time believing that these stages are generated the way they are.

As a roguelike, Abyss Odyssey has a solid structure. The only goal is to descend to the bottom of a vertically-oriented map and kill the legendary monster that waits at the bottom. While this can technically be accomplished in under an hour, death puts the player back at the beginning. (Naturally!) In light of this, I was continually surprised by how much new content I was unearthing with every journey back down—new bosses, new hazards, new characters, and a constantly-changing color palette. Games with permadeath (or pseudo-permadeath, as it is here) run the risk of feeling redundant, but Abyss Odyssey's environmental generation engine is up to the task.

My primary issue with the game is the combat, which is a shame, because there's an awful lot of it. There's a big emphasis on deliberate movement, defense, and a somewhat roundabout cancel system, similar to what one might find in a traditional fighting game. Players hoping to button-mash their way to the final boss will be frustrated, as Abyss Odyssey calls for reading enemy movements and stringing together combos with careful consideration. Unfortunately, ACE Team's first mistake was in initially limiting the moveset so much. I get that the point was to force players to replay and gradually unlock new abilities, but the random nature of progression can potentially obstruct an appropriate pace.

A more serious problem with Abyss Odyssey's combat is that it's slow. Along with forcing players to cancel combos, movement itself feels annoyingly sluggish, to the point that the very act of turning around seems to take forever. I'd excuse this as a stylistic choice, except that Abyss Odyssey does a terrible job of scaling its difficulty. In the designated "hard" levels, enemy reflexes and reaction times are so inhumanly fast that it becomes obvious that they're just reading the player's controller input directly—in other words, it's cheating. The thick controls and lightning-fast opponents clash to create a game that's borderline impossible to keep up with.

This problem is exacerbated by the absolutely dreadful port job to Xbox 360. I would honestly say that this version averages around 15-20 frames per second, and even then it stutters and hiccups. I also noticed that there's considerably more button input lag on the Xbox 360. It was so bad that I tested the game on a different monitor just in case there was some sort of scaling issue affecting playability, but nope… The game just chugs.

This poor performance also affects the platforming, which frequently demands precise jumps and occasionally asks players to dodge obstacles in midair. If I'm trying to land on a moving platform and the controls are laggy, more often than not, I'll wind up missing it and falling into a bottomless pit through no fault of my own. That's bad anywhere, but it's infuriating in Abyss Odyssey

, where death can be so punishing.

The core game certainly shows promise in its distinctive style and its solid procedural generation engine, and players partial to fighting games may gel with the combat more than I did. However, the difficulty spikes make the campaign more frustrating than rewarding, and the shoddy optimization on Xbox 360 nearly drives it into "unplayable" territory. If it must be played, it should be played elsewhere. Rating: 4.0 out of 10

Parents: According to the ESRB, this game contains violence and partial nudity. The violence is fairly standard non-graphic fantasy stuff, and I'm fairly sure that the partial nudity just refers to some occasionally scantily-clad demons and so forth. Nothing terribly offensive about this game.

Deaf & Hard of Hearing: All dialog is subtitled, and sound cues aren't important to the game in any way