For those who haven't treated themselves to this little gem of a game, it's the story of a "witcher" (duh) named Geralt (pronounced with a hard "G", as in "Garfunkle"), who is a monster hunter in your typical olde tyme fantasy kingdom. The story is far too complex to recount here, but the game's unique twist is that, in addition to being simply a well-rounded and entertaining RPG, it forces players to make morally ambiguous decisions that often have significant ramifications considerably later in the game. The consequence's of one's actions are never as readily apparent as they are in games like Mass Effect where there is always a clear-cut "good guy" and "bad guy" path. In The Witcher, all the characters have their own plights, and while shady characters are in no short supply, Geralt often has to make difficult decisions about who to trust, and the game can play out dramatically differently from seemingly inconsequential actions. 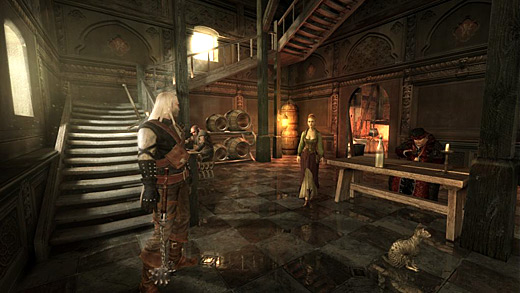 Normally, a video game selling well isn't anything to throw a parade over, but The Witcher is a bit of a special case. It's the first big project from a mostly unknown European developer, and while the game is based on a series of short stories, it's relatively unknown and a totally new IP for video games. Its commercial and critical success is cause for optimism at a time when we are being inundated with sequels and generic, formulaic games with monstrous budgets. The Witcher was an ambitious and risky undertaking for CDProjekt, and it's nice to see them pull it off well and find enough success to become a multi-platform developer. CDProjekt has also done a fantastic job supporting the game, not only through a series of patches but through their excellent Enhanced Edition patch, which reworked significant portions of the game and added some new content, all free of charge.

It's also nice to see that there are PC developers out there who are still interested in evolving the single-player RPG rather than jumping on the MMO train that seems so du rigeur these days. Personally, I'm not a big multiplayer fan at all, and I really enjoy immersing myself in a big, complex game like this. For those PC gamers who haven't taken the time to check out The Witcher, this Spring's somewhat dry release schedule is a great opportunity to do just that. Console gamers, meanwhile, should definitely keep their eyes peeled for the reworked version of the game hitting PlayStation 3 and Xbox 360 this Fall. I only hope that "consolized" doesn't translate to "bastardized", and console gamers get a game every bit as sophisticated, complex and fun as the PC edition.

I first heard about The Witcher while listening to GFW Radio (God rest its soul) last year. At the time GFW editor Jeff Green was telling us the wonderful experiences he had wooing women in the game. That was the high point of the game for him. Not that the actual “game” parts weren’t any good, but the sex and wooing women was implimented in such a way as to make it as easy or distracting as you wanted it to be. Not many games can pull that off. The Witcher was a game for adults… men. Yes, the notion… Read more »

The Witcher was the game that let you score with many ladies while hacking things to death. It was a total male fantasy that actually delivered on the virtual sex (in a way God of War could only dream of) and it was actually fun to way the other 10% of the game. It was and still is number one on my list of PC games that I have to try out with my current PC configuration. Congratulations to the developer for sticking to its guns and releasing the product that it wanted to release and not the most politically… Read more »

I’m looking forward to Rise of the White Wolf for the console very much. I’ve heard great things about The Witcher, but haven’t gotten the chance, was real “involved” at the time of its release…