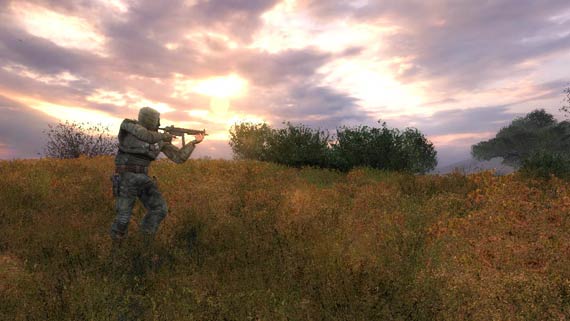 After I first completed S.T.A.L.K.E.R.: Shadow of Chernobyl, my immediate compulsion was to play the game through again, all the way from the beginning. Not just because I was captivated by the superb storytelling; not just because I was mesmerized by the game's incredible atmosphere and next-generation graphics; and not just because it's a game quite unlike anything I've ever played. No, I felt compelled to play the game again because, despite countless hours delving into its mysterious and violent post-apocalyptic world, I completed it feeling as though I had barely scratched the surface of what this beautiful and unusual game had to offer. It turns out that my instincts were not misguided. My second time through the game, I discovered countless more missions, three new endings, an entire new arc of the central storyline, and learned a great deal more about "The Zone" and the amnesiac protagonist's place within it. And indeed it is in its ability to realize a truly complex and mysterious world that makes S.T.A.L.K.E.R. such an engaging experience.

S.T.A.K.L.E.R. is at its core a first-person shooter, but it blends a number of elements from other genres and ends up really defying any strict genre classification. There are elements of exploration, trade, role-playing, action, horror, and storytelling all whisked together in a way that keeps the game from being pigeonholed by tired genre clichés. The game takes place in the year 2012 when, mysteriously, there has been another accident at the Chernobyl Nuclear Power Plant. This time, the 30-kilometer area surrounding the plant-known in the game by its real-life namesake, "The Zone"-has turned into a bizarre world filled with reality-bending anomalies, mutated beasts, and warring factions both obsessed with and terrified of the secrets buried in the ruins of the reactor. The game begins as players take control of an amnesiac mercenary (known in the game as a "stalker") who was found on a truck that crashed as it was transporting dead bodies out of the Zone. With few clues to his identity, he begins a search to unravel the mysteries of The Zone and discover the truth about his past.

Following this brief introduction, the game opens up into a massively non-linear game that, while not as sprawling as games like Elder Scrolls IV: Oblivion, far eclipses other first-person shooters like Half-Life 2, Doom 3, and F.E.A.R. There are countless ancillary jobs available that can be completed for cash or assorted items and weapons, and a central plotline with a wealth of branching missions that lead toward one of numerous possible endings. The Zone is filled with mutant creatures, warring factions, and bizarre "anomalies"-dangerous disruptions of reality that can burn, shock, or even combust anything that haplessly wanders too close. 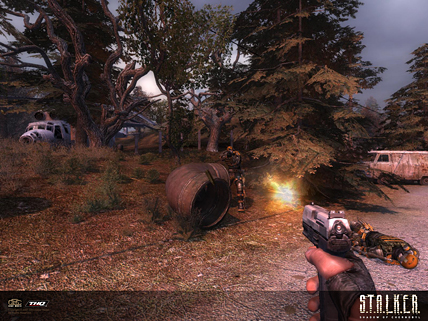 The Zone is brought to life by an extremely impressive artificial intelligence system, which GSC Game World dubs the "A-Life" system; the non-player characters (NPCs) in the game are impressively preoccupied with their own needs-hunting for food, warring with characters in opposing factions, resting, socializing, trading, searching for attribute-enhancing "artifacts" spawned by anomalies, eating, and occasionally involving the player in their troubles. Like the NPCs, players must also find food, trade, and ward off violent factions; it is by making the protagonist a "mere human," caught up in all the violence, confusion and social struggles of The Zone, that S.T.A.L.K.E.R. makes its world remarkably believable.

The Zone is a violent place, and there is an appropriately futuristic, yet surprisingly lifelike arsenal of weapons and armor. The combat can be extremely difficult, particularly early in the game, because the early weapons aren't very accurate- quite realistically, I might add. There is a bit of a stealth element in the game, making it possible to simply avoid some enemies by tip-toeing through shadows and shrubs, but combat is frequently an inevitability. Enemies also tend to be virtually bullet-proof anywhere but their heads, which I was not quite so fond of. I do appreciate the rewarding realism of a well-placed head shot, but enemies react inconsistently to localized damage. It seems to require near-surgical precision coupled with a healthy dose of luck to get an enemy to react realistically to a bullet in the shoulder or knee. However, the weapons do get much more powerful and accurate later in the game, and the armor gets much more resilient, making the combat more engaging and less suicidal. It's a rewarding feeling when enemies that were virtually unbeatable early in the game become cannon fodder after some powerful weaponry is acquired.

Fortunately, much like an open-ended role-playing game, the game lets players approach the central missions at a leisurely pace; it's entirely possible to spend days simply exploring The Zone and carrying out a variety of mercenary-like side jobs. Since the various armored suits in the game wear out as they're damaged and gradually provide less and less protection, lengthy missions can be very difficult without meticulous preparation, so it's usually worthwhile to take on some of the side jobs in order to be able to afford more advanced equipment for the more difficult missions. Most encouraging, though, is that the game's side jobs, trivial though they often feel, are structured such that they can usually be completed as the player progresses through the central storyline, rather than requiring time-consuming diversions that detract from the focus of the narrative. 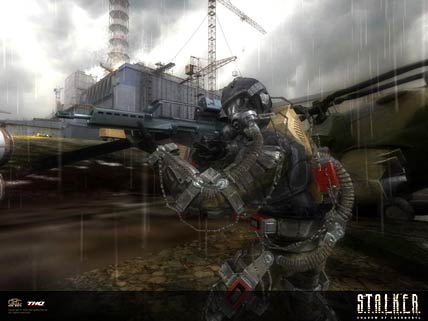 S.T.A.L.K.E.R.'s post-apocalyptic depiction of The Zone is both an artistic and technical milestone in videogames, showcasing remarkably diverse and detailed environments, brought to life with a breathtaking next-generation graphics engine. The development team at GSC Game World really went the extra mile, replicating the Zone from a large collection of photographs with meticulous attention to detail. From its vast wilderness filled with beautifully detailed foliage and eerily authentic post-Soviet architecture to claustrophobic industrial corridors that illuminate shadows with remarkable realism, The Zone feels oddly familiar, yet perverse and even terrifying in its mystique. Its visual panache does not merely compliment the gameplay; it is integral to the tension that propels the narrative forward with a sense of both childlike wonder and spine-tingling dread that has rarely been so vividly realized in a game.

Its narrative, too, is a rare achievement. Not only does the complex social environment of The Zone deal with the selfish and sometimes zealous nature of humankind, but the complex storyline weaves a brilliantly executed allegory confronting the ethical conflicts inherent to mankind's scientific evolution. From the everyday interactions in The Zone to the game's epic climax, the player is presented with decisions that carry with them a moral substance that is all too lacking in modern videogames.

S.T.A.L.K.E.R. has proven to be one of the most difficult games for me to review. I've never played a game quite like it, and the emotional and visceral impact it imparted on me have been difficult to put into words. It's an incredibly rich, unique and innovative take on first-person shooters-yet it's also a flawed game, suffering from a few minor scripting bugs and some rough edges in the gameplay that occasionally interfere with what is, for the most part, an exceptionally engaging experience. But despite its imperfections, it is a truly groundbreaking game, captivating in its complexity, its mystery, and its vividly realized world that stands as a milestone in both imagination and engineering. Rating: 9.0 out of 10

Disclaimer: This review is based on the 1.003 version of the game.

I completely agree… I’ve been so disappointed with gaming for years. There is such a lack of thought provoking design it’s sad. As more and more people worship poorly written videogames I increasingly feel more alone with no one sharing a common interest in my ideals.
I think STALKER was the best FPS I’ve ever played if not the best game ever. I was literally stunned because I went in with low expectations. I am a big fan of Half Life 2 and Crysis but this game definitely deserves more attention.

With multiple endings, you cannot say the ‘ending; is bad, because there are good and bad endings. This is one of the best FPS games we have seen since the original Half Life! Gamers got it right for once too, with the gameplay and gameworld of STALKER being of more interest to them than the ‘seen before but with better graphics’ of Crysis, hence STALKER outselling Crysis by about 2 to 1! This game will be remembered, like the first Half Life is. And other than GSC Gameworld doing a new version every couple years (which they can in my… Read more »

Good review, but i think you miss two thing… “Not just because I was captivated by the superb storytelling” Ok, the story in itself if very good, you have the Chernobil background and the “Sterlock” mistery…But the way it is tell to the player is just bad, it is hard to understand where you are in the game’s story. And the ending in the game is also very bad. When you pass the Duty and Freedom faction base the game because very linear.. and the very ending of the game when you cant choose the video is stupid, i mean… Read more »