According to ESRB, this game contains: Blood and Gore, Intense Violence, Strong Language, Use of Alcohol 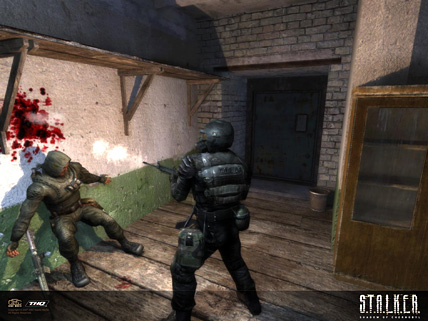 Parents should be wary of the game. While not overtly gory or graphic, it is quite violent, deals with mature themes and is not intended for a young audience. Certain scenes, such as a truckload of corpses or bizarre dream sequences may be too intense for younger players.

First-person shooter fans, particularly fans of genre benders in the vein of Deus Ex, will likely enjoy S.T.A.L.K.E.R. tremendously. It may also interest fans of non-linear role-playing games due to its economic system, open world and its role-playing-like quest structure.

PC gamers should be aware that the game has some pretty hefty system requirements to be played using maximum settings. The game has plenty of options to tailor the game to older systems, but the most striking atmospheric effects are going to be reserved for higher-end gaming PCs.

Deaf and Hard of Hearing gamers can enable subtitles during dialogue, but may find gameplay difficult due to frequent audio cues.

I have the game, and I would love to play it, but basically it is unplayable. Even on my now far more advanced machine.
The movements are jerky, my harddisk seems to run continuesly. I mean I don`t have an old machine and I am well above minimum specs now…

I would never recommend this game to anyone.
Yes I have the newest patch 1.005, but it is still
a pest to play.

Oooh, now I want to play this game. What kind of bizarre dream sequences would be inappropriate for children? I am expecting the main character running down empty city streets with a bucket on his head as a giant attempts to beat him with a hammer while being pursued by an army of quadruple-breasted prostitutes that attack with clitoral snakes.