The Zone has never been less inviting 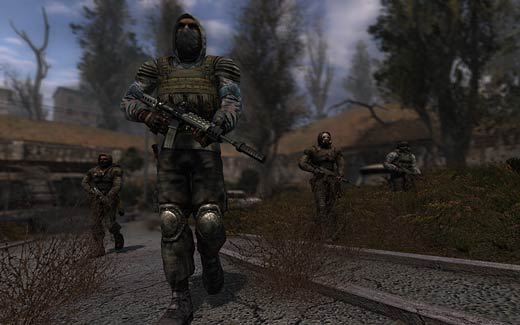 LOW Shooting another character with a shotgun nine times from a few feet away and doing no apparent damage.

WTF What happened to the game I loved?

S.T.A.L.K.E.R.: The Shadow of Chernobyl was one of my favorite games of last year—an ambitious, mature, and incredibly atmospheric game that was marred only by some unfulfilled promises and amateur execution here and there. The game spent some five years in development and when it was finally released, it still had a lot of bugs and unfinished features. Now, only a year and a half or so after the first Stalker (I'll refrain from typing it as an acronym for my own sanity), the series has been expanded with a prequel under the title of Clear Sky. It promised to expand on the ideas presented in the first game – ideas that were forward-thinking but never fully capitalized upon. It promised to be released with the prim and polish of a finished game, rather than the rushed-out-of-beta feel that the first had to it (which was only corrected after a series of patches).

Consider the promises unfulfilled. Clear Sky is a colossal disappointment on every front, retaining all the flaws of the original and indeed amplifying them to a large degree. The new concepts are implemented with such an amateurish neglect of fundamentals that one can't help but wonder how this game ever made it to retail in such a sad state. It's also buggy as hell, in fact quite a bit more so than I ever remember The Shadow of Chernobyl being. The only thing clear in this sky is that if the original was woefully delayed, the prequel is woefully rushed.

The problems begin right out of the gate. The game boasts "enhancements" to its proprietary X-Ray engine that now take advantage of DirectX 10. As in the Crysis games, this isn't necessarily a good thing. Under the normal "dynamic lighting" mode from the original game, performance is good. Under the new "enhanced dynamic lighting" mode in DirectX 9, performance is a little slower, as expected, but still consistent. Under the DirectX 10 version of this mode, which brings with it some exclusive effects, performance is erratic. The game swings between being butter-smooth and unplayably choppy for no apparent reason. Beginning the game, I was treated to an absolute slide show, right from the opening cut-scene that chugged along with all the speed and finesse of a wounded duck. Keep in mind I am running a reasonably high-end PC. One particular level loaded with a chugging frame rate, but when I reloaded the level, it ran fine. Keen gamers have also noted that certain sun effects absolutely kill framerates at certain times of the day. It all makes for a game that is very difficult to judge in terms of what kind of in-game settings to expect. 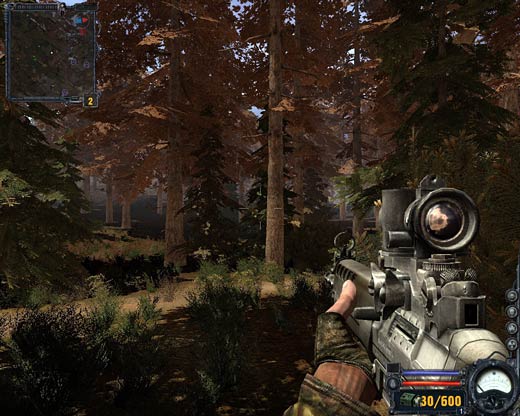 After fiddling with the settings for far too long, I was able to get a smooth frame rate…most of the time. Then came the gameplay, and it just went downhill from there. Clear Sky departs from the original primarily by greatly expanding the role of various factions in the game. Players can form alliances with various factions and experience the rewards and consequences of such alliances. For players familiar with the first game, it will feel much like the Freedom/Duty section (both of which make a return appearance), but much more fleshed out. However, the game shifts its focus to factions at the detriment of the atmosphere and storytelling that made the original so compelling, and its core gameplay is so flawed that I ultimately found the game to be little more than an exercise in frustration.

The first area of the game serves to introduce the player to the core concept of factions. It follows the titular group, a ragtag band of researchers, attempting to capture various strategic points from bandits. Our hero is asked to pitch in, with the promise of reward. Problem is, the factions just seem to go about their business. Clear Sky advances on a group of bandits, there's a firefight, and it's mission accomplished—regardless of whether the player was anywhere near the actual fight. The rewards are the same regardless of whether players actually do anything. As I played this confusing section of the game, some serious problems reared their ugly heads. While the first game featured bleeding, it was done in three stages of severity (noted by green, yellow and red icons), and most of the time would stop on its own; only occasionally would it be "red", which necessitated the use of a bandage. This time, bleeding is always "red" and thus always requires a bandage. The bleeding does stop eventually on its own, but it lasts long enough to require a health kit or two to survive, and health kits don't exactly grow on trees. Making matters worse, it seems like a stray bullet can cut a player just by looking at him wrong, which makes for an incredibly imbalanced feel to combat.

That's not the worst of it though, unfortunately. Weapon accuracy and damage modeling were problems in the first game, but Clear Sky takes it to a whole new low. I can appreciate some semblance of realism in a game, but when I shoot some goon literally nine times with a shotgun from a few feet away and he doesn't so much as flinch, there is a problem. These kinds of oddities wouldn't be too horrible were they not compounded by the cheap bleeding system and the scarcity of decent weapons early in the game. The combat ends up feeling cheap and frustrating. Instead of being challenged by the game, I felt as though I was fighting my way around the game's contrivances. 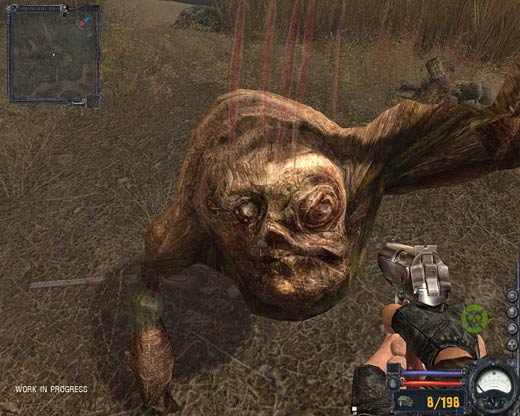 I have to admit that, after a dismal first few hours in the game, it took a lot of willpower for me to swallow my disappointment and keep going. Were I not playing the game for review, I probably would have given up on it—and I have no reservations about saying that if a game bombs in the first few hours, it might as well be a total wash. Gamers shouldn't have to wait for a game to start getting good, particularly when the gameplay is flawed in fundamental ways. I nearly threw in the towel, but instead I dutifully slogged through to the end in the hopes that I would see more of the elements that made the original such a favorite of mine. Fortunately, Clear Sky does get better as the game world opens up and the faction system gets fleshed out a little more. There are a great many rewards to gain from aligning with various factions, including a great deal of customizable weapons and armor—although even the faction system is quite flawed, rife with scripting problems and AI bugs. And, for the most part, the game retains the compelling art direction of the original (indeed, quite a few areas from Chernobyl make a return appearance). However, the decrepit underground labyrinths that were so gripping in Chernobyl are few and far between in Clear Sky, sapping the game of its strongest and most memorable survival-horror elements.

I'd be remiss not to mention the game's revised artifact-finding system. While artifacts were abundant in Chernobyl, Clear Sky takes place before the Zone became such a volatile place. Artifacts can now only be found near anomalies, which are mostly invisible. Players get the chance to use some nifty high-tech artifact detecting equipment, although the core mechanic for finding anomalies is the epitome of lameness: players toss bolts around until one hits an anomaly. Apparently in the Zone, bolts are in infinite supply. It's disappointing that GSC couldn't be a bit more creative than giving players a magical infinite supply of bolts. Artifacts are however much more valuable this time around, and there is a nice risk-vs.-reward factor in what is essentially the artifact-finding minigame. Unfortunately I found it more tedious and contrived than rewarding, especially since it's easier to make money just by killing people and selling their equipment.

All of these problems compound one another to the point that the game's stronger elements are hopelessly drowned out in a sea of bad ideas and sloppy execution. Clear Sky is a disappointing showing from what just a little over a year ago seemed like one of the world's most promising developers. The team at GSC Game World showed such hints of greatness with The Shadow of Chernobyl that to see the prequel descend to such depths makes me wonder if the first wasn't just a fluke. I really wanted to like Clear Sky, but it's executed so poorly on so many levels that I simply never had any fun playing it. I still passionately recommend the original as one of the most unique and evocative first-person shooters ever made, despite its roughness around the edges. But Clear Sky takes everything that I loved about Chernobyl—the mature storyline, the nerve-wracking underground laboratories and the rewarding combat—and muddies them with a litany of bugs and bad design to the point that it overwhelms its more redeeming qualities. Five years might be too long a development cycle, but a year and a half clearly isn't enough. Maybe next time GSC can find a happy medium. Rating: 4 out of 10

Disclosures: This review is based on the 1.05.04 version of the game.

Parents: According to the ESRB, this game contains blood, drug references, language, violence. While not gory or over the top, the game is not meant for children, and has an element of realism that may be disturbing.

Deaf & Hard of Hearing: The game does allow subtitles to be enabled for scripted dialogue, but the action relies heavily on contextual aural cues, such as enemies talking to each other and gunfire coming from all directions.