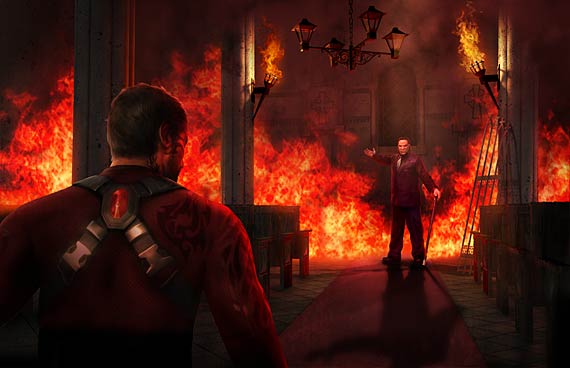 When I first started playing Infernal, I was actually pleasantly surprised. It reminded me of Winback for the Nintendo 64—frenetic third-person shooting with a basic but effective cover system that adds a bit of flair to the combat. The game's presentation is surprisingly polished as well (considering its B-game status); it might not send people running for a video card upgrade, but it certainly looks good. There's even a pretty entertaining story in there—well, entertaining in a Resident Evil sort of way. It's campy and the voice acting isn't always convincing, but it doesn't feel hastily slapped together.

The game basically requires players to shoot a lot of people, and occasionally solve a simple environmental puzzle here and there. The game's name is in reference to demonic powers the protagonist possesses that aid him in dispatching his foes. See, our (anti)hero, with the spellbinding name of Ryan Lennox, is a fallen angel of sorts—a warrior for the white-robed, church-going types who is now kicking ass and taking names for the other side. It's never really clear why the poor sap was kicked out of the holy roller club in the first place, but he apparently feels a bit dejected and is intrigued when the Devil (who seems oddly like Laurence Fishburn) wants to recruit him. 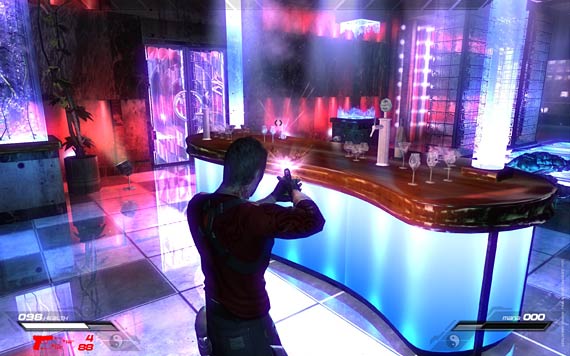 What follows is a series of corridor shooting action that while enjoyable for a while ends up feeling a bit shallow and dated. Early on, I actually enjoyed the game quite a bit. It's simply a matter of expectations. The game is a very simplistic, arcade-style shooter. Don't expect something with the scope and depth of Half-Life 2 here; it's mostly about walking into a room, shooting a bunch of people, collecting health and ammo from their corpses (portrayed in this game by draining their souls), perhaps solving a simple puzzle to get to the next area, then repeating ad nauseam. Ryan starts out with a simple offensive power that drains a bit of his “mana," but eventually learns other neat stuff like teleporting and telekinesis. Using these powers drains Ryan's mana, which is replenished by—surprise—draining souls from the corpses of his fallen nemeses.

It's not a totally bad idea, though it's not going to win any prizes for originality. The weakness here is that the game ends up being a one-trick pony. The enemies are really pretty easy to dispose of with a few well-placed gun shots, so the use of magi… err, mana seems a bit superfluous. The cover system in place is pretty slick, but again, since the enemies are fairly easy to dispose of anyway, I found myself using it only sporadically. The real challenge comes from the boss fights, which while a little on the cheap side are certainly more interesting that mowing down room after room of the same basic enemies. 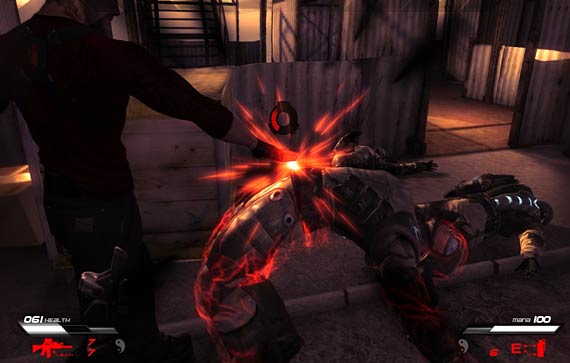 If it sounds like I'm being harsh here, I'm really not. I actually enjoyed Infernal quite a bit. It just has to be approached as light, escapist fare. The game has the depth of a kiddie pool, weak artificial intelligence, a near-total lack of enemy variety, and no environmental interaction to speak of. But for the short time that this game lasts, it can be pretty satisfying to shoot a lot of stuff and set unsuspecting bad guys on fire. The presentation and pacing are good enough that the game stays fairly entertaining, and the comic-book storyline keeps things from feeling purposeless. It's a short and mildly engrossing action romp that, while probably not worth the price of a full game, will make a nice time killer for those long Saturday afternoons when the big game of the month hasn't hit shelves yet. Rating: 5 out of 10

Fortunately, it is (or at least, will be, when they fix whatever problem they’re having) available on Gametap. As part of a $10 a month subscription it’s probably more than worth it.