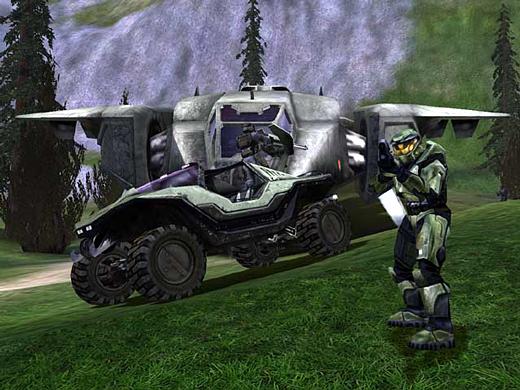 After indulging my senses in the wonder that is Halo on a regular basis for well over a month at the time of this writing, I realize that Halo is not only the most polished, unique shooter ever created, but a pivotal step in the evolution of its oft-recycled genre. Far from being a recycled first-person shooter, Halo is a milestone that seamlessly blends innovation and refinement into a thoroughly superlative gaming experience. While it is not without its faults, I found them to be negligible when juxtaposed with the game's unprecedented accomplishments. Halo is the first game since 1998's PC release Half-Life to truly breathe new life into the single-player first-person shooter, and it does so in ways that are both unexpected and delightfully original. But to understand why Halo is such an incredible game and why I feel it is deserving of our highest honor here at GameCritics, it is important to understand both the core elements of what makes a shooter successful and why Halo's innovations shatter the conventions that first-person shooters have succumbed to over the years.

After reading Dale's exceptionally thorough review, I realize that although I see eye to eye with him on much of what Halo both achieves and lacks, I ultimately have a differing view of the significance that can be attributed to those factors. First and foremost are Halo's spectacular environments. The detail, particularly in the outdoor worlds, is unrivaled. Stars literally sparkle in the sky; trees sway in the wind, clouds glide across the sky, the ocean tides splash gracefully against the shoreline. Even the grass has exceptional texture. The scale of it all is truly amazing: one can gaze far into the distance and view large portions of the level, yet every rock, tree, and plant is exquisitely detailed. The indoor worlds are also beautifully rendered with all sorts of amazing subtleties, many of which are somewhat hidden until players illuminate them with Master Chief's flashlight. The graphical splendor is grand enough, but Halo's worlds are convincing not because of their looks, but because of the logical implementation of the environments; it doesn't just look like a real world, it feels like one. Every object in the environments can be used to strategic advantage, and although the environments are not destructible, the reactions seem very natural. If a large blast hits the side of a cliff, for example, it will send a small avalanche of rocks and gravel tumbling downward. Stray gunfire will cause a reaction depending on the surface it hits, and explosives detonate in a lifelike plume of smoke and debris that falls naturally to the ground. The vehicles in the game have convincing physics, and are accordingly challenging to master but ultimately responsive and lifelike.

Halo excels with numerous innovations Dale mentioned in his review. The unique health/energy shield system negates the need for the arbitrary, illogical placement of health and power-ups. First-aid kits and human weapons are generally found by the bodies of dead marines, just as alien power-ups can be found in places where large numbers of the Covenant gather. The two-weapon system injects both a welcome dose of realism (I always wondered how game characters could simultaneously carry around a rocket launcher or two, multiple heavy machine guns, shotguns, etc.) and a healthy bit of strategy. While some weapons may not seem as useful initially, a little patience and experimenting will reveal that every weapon has a unique function with according strengths and weaknesses. The tide of various encounters can be altered radically depending upon which weapons the player chooses to use, and ultimately the weapons are exceptionally well-balanced, creative—and of course deadly. 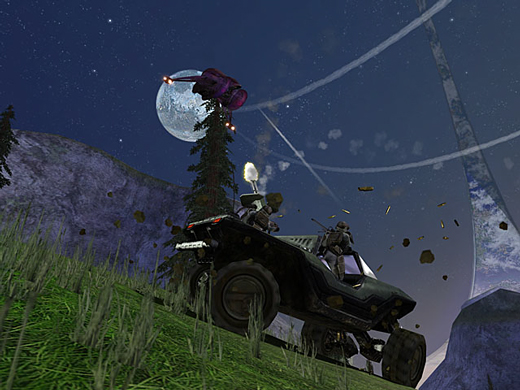 The artificial intelligence (AI) in Halo similarly represents a solid step forward. The implementation of friendly tactical AI is a landmark in single-player games. Remember how the bone-headed Nataglia would run around aimlessly in GoldenEye 007? Your allies in Halo are not air-headed amateurs, but tough-as-nails marines that are full of personality and adept at utilizing their surroundings in combat. Not to be outdone, the alien enemies put up one heck of a fight and are similarly skilled in group tactics, evasive maneuvers, and deceptive offensive tactics. Their behavior is convincingly unpredictable, lending the game a feeling of randomness that only adds to the lifelike feel of the worlds. Even though enemies will always appear in the same spots in repeated play, one can never predict their reaction to a given situation. Try as I might, I have been unable to find exploitable holes in the AI. Interestingly, when the difficulty is cranked up, enemies don't so much become tougher as they become smarter, using more deft evasive maneuvers and showing surprising patience and tact.

The significance of integrating vehicles into the game cannot be overlooked either. Unlike Dale, I found the realistic physics to be enjoyable and ultimately satisfying, not cumbersome or obstructive. Halo's most remarkable achievement is the creation of a believable fantasy world, and the realistic feel of inertia that the vehicles (particularly the warthog) possess ads tremendously to the suspension of disbelief. While driving the vehicles is an art unto itself, practice will yield consistent consequences that are realistically predictable. Choosing whether or not to use a vehicle will have a noticeable bearing on the reactions of the enemies and affect the outcome of combat accordingly.

The icing on the proverbial cake is Halo's multiplayer. Far from coming up short, I have enjoyed it immensely and have found it to be quite well designed. Although the addition of computer-controlled "bots" would undoubtedly have been a plus, it is a rather insignificant blemish on an otherwise stellar multiplayer feature. There are leagues of games and rules to from which to choose, and it is even possible to mix and match rules and games to create a "custom" multiplayer mode. There are nice touches to the map layouts; for example, a sniper rifle may be appropriately hidden on a high ledge, but the thoughtful placing of a camouflage power-up at ground level prevents the sniper from dominating the game. While there are a handful of levels that suffer somewhat without large numbers of players, most are suitably small for four players. Nonetheless, I have to confess that many of the most nail-biting moments I enjoyed in Halo took place in the biggest multiplayer arenas with only myself and a single competitor to fill the roster. Rounding out the multiplayer options, the cooperative feature in Halo is just one more thing to love. This simple yet rare feature has not been so enjoyable since the days of two-player classics like Ikari Warriors and Contra. Halo's sense of randomness creates the necessity of near-constant planning and cooperative strategy. Hopefully, Halo's successful implementation of this highly enjoyable feature will challenge more developers to integrate it into future video games.

I believe that the greatest achievement to which any game can strive is to create a world so lifelike, so logically implemented, that it allows players to feel a suspension of disbelief that is uninterrupted by illogical inconsistencies. Every aspect of Halo—the amazing artificial intelligence, the realistic physics, the weapons and health management, the graphical detail—blend together seamlessly to realize a convincing world that is awe-inspiring and truly immersive. While physical laws are complex and predictable, Halo's world is permeated by a feeling of uncertainty that brings it to life in way that no other game has done before. It is the best single-player first-person shooter ever created, and its cohesive design will serve as a stepping stone for many years to come. Rating: 10 out of 10