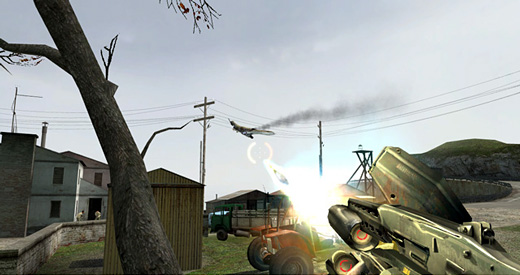 I'm in a bit of a conundrum: I'm both a big first-person shooter fan and someone who doesn't own a gaming PC. My aging home computer is suitable for most day-to-day purposes, but investing in a high-end gaming rig would be asking a lot. So it was with some dismay that I watched many PC gamers hail Half-Life 2 as the greatest shooter since, well since the inception of the genre. It garnered tons of critical acclaim and earned a number of Game of the Year awards, just as its predecessor did back in the late '90s. Meanwhile, I sat on the sidelines, waiting patiently for a console version.

Finally, a year after its release on the PC, Half-Life 2 has been faithfully ported to the Xbox. While I don't have a basis for a direct comparison aside from the visuals, the official line from Valve (one that, based on anecdotal reports, is accurate) is that all of the game's content is intact. Certainly, for those who played the game on their PCs last year, the Xbox port has nothing to offer but inferior graphics—although they look very impressive for an Xbox game. But for those like myself who are dedicated console gamers, the port is finally an opportunity to play one of last year's most acclaimed games.

The question that lingered in my mind, naturally, was whether Half-Life 2 could possibly live up to the expectations I had for it. Is it truly the best game of its kind ever made? One could certainly make the case as such, but after playing through the game thoroughly, it's not a notion I could agree with. Half-Life 2 is a fantastic game that accomplishes a great deal, but it is also prone to many of the contrivances that continue to restrain the genre from groundbreaking progression. And although one could certainly argue the same about many other games (such as the unapologetically self-referential Doom 3), Half-Life 2 thinks forward in so many ways that it's all the more disappointing when it appears stuck in the past.

The action in Half-Life 2 is standard first-person shooter fare. The artificial intelligence of the Combine soldiers is merely average at best—enemies will repeatedly walk into the line of fire, rarely take cover, and never retreat. They will not flank or try to flush players out of hiding. Instead, they will stand out in the open, walk side to side, and pursue retreating players carelessly. As such—and despite an impressive variety of opponents—the combat lacks the flexible, dynamic feel of Halo 2, and the game's action sequences play out fairly predictably.

Half-Life 2 makes liberal use of the Havoc 3 physics engine, particularly through the use of the creative Gravity Gun. While the presence of physics is nothing new to first-person shooters, the Gravity Gun it them a new level of functionality, despite the gun's sometimes inconsistent feel (some objects seem arbitrarily impossible to move). The game ultimately doesn't offer much more use of physics than other shooters, but the inclusion of the Gravity Gun is certainly novel.

However, the real strengths of the game lie primarily in its compelling settings and its dramatic and excellently scripted set pieces. From the outset, the game conveys a feeling of confusion, suffering and desperation among the people caught in the dystopian future of the tyrannical extra-dimensional Combine race. The game marvelously builds tension as Gordon Freeman must escape from the Combine unarmed to join forces with the ragtag human resistance plotting to overthrow the Combine. From there, players will venture through vast waterways, remote highways, deserted towns, war-torn cities and the high-tech Combine base itself, using a mixture of numerous vehicle sequences interspersed with the on-foot action. 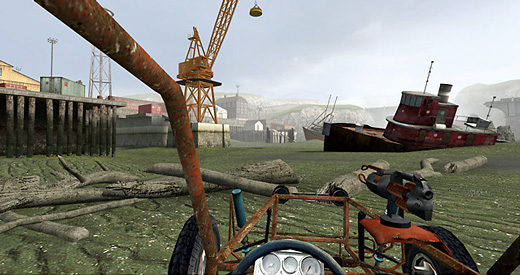 I felt that despite its clearly restrictive linearity, Half-Life 2 was most successful in creating the feel of an actual world of massive scale, one that felt very believable. The set pieces are so massive and scripted with such attention to detail that they make the player feel like only a small part of larger events, something very few games are able to convey successfully. I particularly enjoyed the lengthy Highway 17 section, where Freeman drives down what feels like miles and miles of a highway, stopping along the way to confront Combine soldiers and aid the struggling human resistance. Toward the final chapter of the game, when Freeman joins the resistance in overthrowing Combine control of City 17, the scripting and set pieces convey a true sense of the desperate odds of the human fighters in a way that makes victory in the battles truly satisfying.

And indeed it is only because so much of Half-Life 2 is done so well that its stubborn clinging to outdated conventions feels as out of sync with the rest of the game as it does. The game uses a creative way of restoring Freeman's health and armor through medical stations throughout the game. However, despite this innovation, the old system of med-pack hoarding is alive and well, and players will spend a fair bit of time hunting around for supply crates to break open for ammo and medicine. Freeman, despite being a mere physicist, also possesses the superhuman ability to carry firepower fit for a small army. Though ultimately only minor complaints, I felt these clichés were out of place and distracting, since the developers worked so hard to create a believable world otherwise.

Also out of place are numerous sequences in which players must destroy Combine armor in the form of flying gunships or the massive Strider tripods that recall War of the Worlds. While the enemies are truly menacing and the set pieces are all very captivating and brilliantly scripted, the method for getting past them feels pathetically contrived. These enemies can only be destroyed by rockets, so each area has a crate full of an infinite supply of rockets. After one or two of these sequences (which, incidentally, do not always involve mechanized foes), it becomes painfully obvious that getting past them requires jumping through very specific hoops. Why didn't Valve allow players more than one way of defeating these enemies? Or, why not build on the system seen in the first gunship confrontation, in which friendly soldiers hand Freeman ammo if he needs it? While more freedom would be the best option, that structure certainly felt far less contrived than forcing players to track down the magical crate of infinite ammunition.

Additionally, as remarkably varied as the enemies and settings are, I did not feel that all of them worked. The waterboat sequences early in the game started strong, but seemed to drag on and become repetitive. Ravenholm—though visually beautiful—was populated with tedious, zombie-like enemies that failed to convey any sense of horror. And while the puzzles in the game often put the Havoc physics engine to impressively creative use, some of the platforming sequences were needlessly drawn out and tedious.

It may seem as though I'm nitpicking or being overly critical. However, for a game to be hailed as the best of its kind, I feel it should be truly groundbreaking. Half-Life 2 takes some steps in the right direction, but it ultimately stays too complacently on the beaten path to set itself above the fray. Halo 2 offered superbly dynamic combat; The Chronicles of Riddick offered never-before-seen gameplay; Doom 3 offered unparalleled atmosphere and tension. Half-Life 2, with its phenomenal scripting, riveting settings and remarkable variety of gameplay, is unquestionably among this elite group as one of the finest first-person shooters ever made—but not one that eclipses the accomplishments of its contemporaries. Rating: 9.0 out of 10.