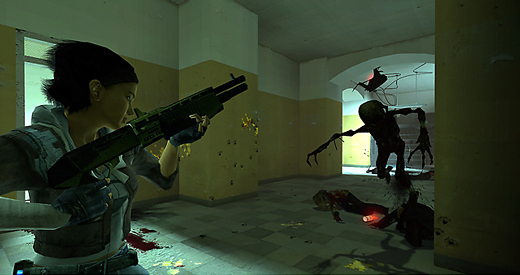 Half-Life 2, though I felt it was a bit overrated, was undeniably a major release and a massively influential game. Valve might be toiling away creating the next-generation Source engine, but they know a cash cow when they see one and Half-Life 2 has the fan following to keep them afloat while they work on their next big blockbuster. While the engine coders do their thing, we gamers will be getting our Half-Life fill with a series of short "episodes" that expand the series' plot a bit. Half-Life 2: Episode One is essentially just an expansion pack, but it's the first in what will be a series of episodic content that continues the story line that ended so abruptly in Half-Life 2.

Episode One picks up right where Half-Life 2 left off, with Gordon and Alyx inside the Combine Citadel just moments after Gordon successfully destroyed the reactor core and prevented the malfeasant Dr. Breen from escaping to a parallel universe. The game follows Gordon and Alyx as they escape from the soon-to-be-going-kaboom Citadel and make their way out of City 17 before it's leveled by the reactor's catastrophic explosion. We get some glimpses of the resistance celebrating their small victory over the combine, but we still see them fighting for dear life as they flee from the doomed city.

Episode One essentially just takes Half-Life 2's basic gameplay and adds a few more levels to further the plot. This isn't inherently a bad thing since Half-Life 2 was one of the most acclaimed PC games ever made, but as an expansion release two years after the big tamale, it's a bit disappointing. There are no new enemies, no new weapons, and no new vehicles. There isn't even much of an opportunity to experience Valve's implementation of high dynamic range lighting, which it demonstrated in the impressive demo Half-Life 2: Lost Coast, because the overwhelming majority of the game takes place in dark, murky indoor corridors. And though it does spin a good yarn and adds nicely to the continuity of the series, the game is still a bit on the short side. The game can be completed in about four or five hours, and doesn't offer much incentive to be replayed. Oh, and we still have no idea who the G-Man is.

It also suffers because many of the first-person shooter clichés that seemed out of place in Half-Life 2 feel even more out of place now. Gordon still has his super suit, and he's still running around smashing crates for bullets and medicine, which he happens upon in the most unusual and arbitrary places. The trusty old exploding barrels make an unwelcome return as well which, like the supply crates, seem littered about in some rather unusual (and oddly convenient) places. The game is still extremely linear, and the artificial intelligence is still pretty unimpressive and easy to trick, even on higher difficulties. It makes for a package that, while impressive two years ago, is beginning to show its age.

Episode One is strictly for the fans. Anyone hoping that this expansion would explore some new gameplay elements or even improve on the old ones is up for a disappointment. It's good stuff—hey, it's Half-Life!—but it's the same stuff. Rating: 6.0 out of 10.

Parents should be cautious of some mild blood and gore, but there's nothing overtly graphic here, nor is there any over-the-top language

Fans of Half-Life 2 should pick this up to get a little more of their Half-Life fix. Just don't expect anything really new.

Shooter fans may find this is worth picking up, only because it's been a rather dry year for the genre. I highly recommend the free Half-Life 2: Rock 24 mod that is downloadable for free for owners of Half-Life 2. It's a user mod that has Freeman escaping a Combine prison, and it provides a good romp without the premium that Valve is asking for Episode One.

Everyone else may want to pass on this one, particularly if Half-Life 2 wasn't your style. There's nothing here that wasn't in Half-Life 2, so it's not going to win any new converts. If you are one of the unlucky who hasn't played the original Half-Life 2, the original is definitely worth a purchase as it can be had for around $20.

Deaf and Hard of Hearing gamers will miss out on a substantial number of audio cues and dialogue; while audio isn't necessary to play the game, it can make a significant difference in its playability.

It’s because of reviews like this one that i come back to Gamecritics. It seems that Valve has gamers and the press under its spell. I can’t see any other way this game received such high scores.

I don’t know how much it retailed when it was first released but this is just recycled stuff for 4hours basically. 9s and 10s?? Give me a break.

It has definitely put me off playing Episode 2 for now.

It’s good too see at least one reviewer with his feet on the ground. HL2 was good, but I found many reviewers getting carried away and overlooking its flaws. Just a quick glance on metacritic shows some magazines and sites giving Episode One 100% – one hundred percent! It’s ridiculous.

Well, it’s a bit of a stretch, but the combine zombies (zombines) are new to Episode One.