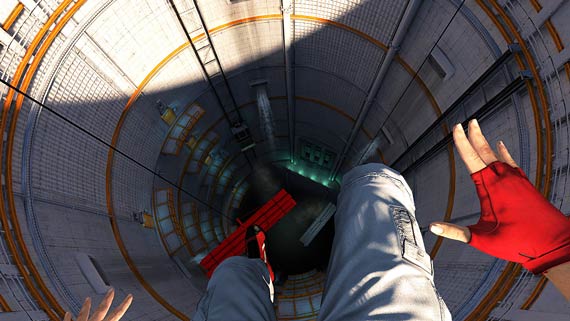 Last year when Crysis came out, I think all of us who played it were a little disappointed in the abrupt, cliffhanger ending. It felt like the ending of Halo 2, where you think you're about to get the biggest, baddest level of the game, and then the credits roll. Crytek's reason for such a lame ending? "It's a trilogy". What? Why didn't anybody say anything before? Are they sure they didn't just run out of time to put in all the levels they wanted?

Today, EA announced that Mirror's Edge will be the first part of a trilogy. What? The first one isn't even out yet. We don't know if it will be any good or if it will sell worth a spit. Need I remind everyone what happened with Too Human?

Ah yes, Too Human. Silicon Knights began development on the game sometime around the release of Space Invaders. Of course, they reminded everyone that it's just one part of what will be this big, epic trilogy.  Then the game, after many, many years in development and great fanfare, garned a whopping 69% on GameRankings.com. Guess a trilogy isn't sounding like such a good idea anymore.

And I would be remiss to neglect the news of Starcraft 2 being broken up into an episodic trilogy, possibly spaced out years apart. At least the Starcraft brand has an uber-loyal following, and Blizzard has a track record of doing, well, pretty much everything right. It just might work.

I remember a time when developers actually waited until a game was successful before they started talking about sequels. I mean, what is more embarassing than being in Silicon Knights' position — hyping up a trilogy for years, then releasing a lousy game? Couldn't these developers just say, "You know, a trilogy would be cool. But we'll have to take it one game at a time."

First of all, most of the big trilogies, like say Star Wars, weren't actually planned as trilogies. When George Lucas filmed the original Star Wars, he wasn't thinking about Return of the Jedi—at least not publically. He focused on making that one movie really good. No stupid cliffhanger endings, just a good movie that built up interesting characters and had enough subtext that there was still a lot of storytelling to do, if audiences cared.

Maybe The Lord of the Rings spoiled everyone. The LotR movies are really just one big nine-hour movie. It's quite possibly my favorite movie. But LotR was based on an immensely popular series of novels that had garnered a loyal fan following over four decades, and Peter Jackson was no hack. He had not just the talent, but the resources at his disposal. The entire trilogy was filmed at once. Silicon Knights, this was not. And here's the other fact: it was an unprecedented gamble, but New Line needed it. But despite being a trilogy, each movie stood on its own. Each had little subplots that resolved nicely while teasing you for more. And when it all finally ended, the final act alone was longer than most movies.

Besides, what's so special about trilogies anyway? Is there something magical about the number 3? You know what's more magical than the number 3? Stories that have good endings. Stories that have interesting characters. Stories that leave you wanting more, instead of just feeling like you should have gotten more. Trilogies are awesome, when they happen. But you can't force them, okay developers? Take it one game at a time, and make sure they each stand on their own. If a trilogy is meant to be, the fans will let you know.

Thanks for the comments on this, I’ve barely seen this mentioned as a point of concern anywhere else. I mean, a classic example of this being a problem is Half-Life 2 “episodes” – these are not episodes in the classic sense, with a year, a year and a half, and now probably over 2 years between each one. Thank goodness BioShock was never told beforehand it was part of a trilogy (there is BioShock 3 on the table already now, of course! but that was after it was released…). Imagine also if Rockstar had said GTA would be a trilogy?… Read more »

Advent Rising is another good example.. a “trilogy” from the get-go, episode 1 crashed and burned and the rest is dust. I agree with the first comment– tell a complete story with what you’ve got and build on it IF you get the chance to do a sequel.

NOOOOOOO! I had great hopes for Mirror’s Edge, but with this whole trilogy-thing I fear the EA-machinery is just taking over. Split the title in 3 parts so that we can release basically the same game every year (or anyone really thinking that this isn’t the EA strategy?). And even when the first part was good, milking a new-born franchise lead to new highs only on rare occasions. Pirates of the Carribean or Matrix anyone? The poorly crafted sequels destroyed almost everything that made the first part great. In games sequels are usually appreciated if, yes IF the first game… Read more »

I think the most sensible and enjoyable way to handle a potentially multi-part story is the way that, for example, Buffy the Vampire Slayer did it on TV. Each season of Buffy was a complete story arc from start to finish, done so because they never knew for sure if they’d be renewed. But each season also provides hooks for continuing storylines, that build into an even more impressive whole. Or Babylon 5 – Babylon 5 does suffer in later seasons from requiring continuity in a way that Buffy did not. But Straczynski deliberately seeded things in early shows that… Read more »