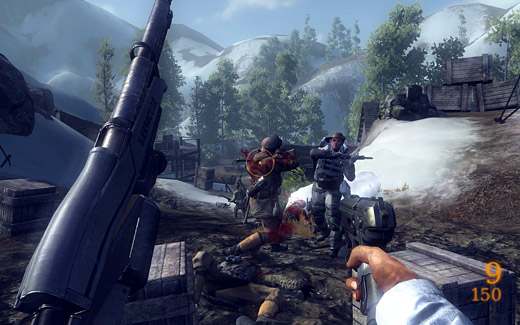 Today I downloaded the PC demo for the upcoming shooter Darkest of Days, which is a game that attempts to accurately re-create historical battles while taking minor liberties with the details, such as allowing you to carry an AR-55 assault rifle into the battle of Antietam. I couldn't figure out how seriously this game wanted me to take it, but upon completion of the demo, I can only say that I strongly support this slightly enhanced version of history being taught in our public schools.

The demo begins with the Battle of Little Bighorn, where our intrepid protagonist heroically fends off wave after wave of identical-looking Indians, only to catch an arrow to what I could only gather is the balls area. Amazingly, he is rescued from certain doom, not to mention infertility, by a guy in a storm trooper costume who pulls him into a time paradox, whisking him 300 years into the future to inform him that time travel is now commonplace and things have gone predictably askew. For no particular reason, this particular Joe is tasked with safeguarding the space-time continuum. I would have thought such a job would be better suited to someone from the future who knew the ins and outs of time-travel, such as whether in real life it follows Terminator rules or Back to the Future rules. But I didn't have time to ask such pressing questions; there's stuff to shoot!

Next is some basic training. After being told how to shoot a gun, throw a grenade, and throw little glowing balls at certain key characters (conveniently marked by glowing blue) to incapacitate them without killing them, I am ready to prevent Biff from establishing his evil empire in Hill Valley. Wait! Wrong demo. I'm then whisked back to the Civil War, this time at the Battle of Antietam. After slowly capping some fools with my trusty musket, my compatriot from the future appears, apparently unsatisfied with my kill ratio, and hands me an AR-55 assault rifle to expedite the process.

Now, if you've ever wondered what it would be like to relive an historic Civil War battle, except with a fully automatic assault rifle, let me fill you in: it's pretty freakin' sweet. Oddly though, none of the other soldiers seemed the least bit alarmed that I was mowing down half the confederate army with a futuristic machine gun. Instead, they just went about their business and even dutifully followed me toward a blob-like time paradox.

I should mention that this game contains some f-bombs and exploding heads, which of course merely add to its historical authenticity. It's not a bad concept, and really, who doesn't want to enhance WWII battles with a laser-guided rocket launcher? But despite the conceptual hook and the entertainingly bad B-movie presentation, it ends up feeling like a pretty routine run-and-gun shooter. I don't need a time machine to know that I probably won't plunk down full price for this one. 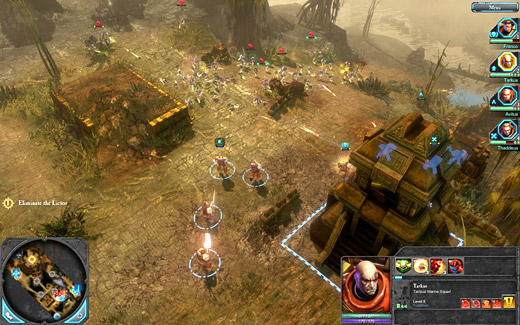 Dawn of War II has been out for a while now, but despite the warm reception it's received from critics and the brisk sales it's enjoyed, I hadn't picked it up. Why? Because I don't do strategy games. I had dabbled with a few of them in the past and never really enjoyed them much. I always felt myself being more concerned with menu screens than what was actually happening in the game, and the lack of visceral action left me a bit wanting.

Dawn of War II doesn't shatter the mold, but it does take after games like Company of Heroes and World in Conflict by taking a more action-oriented and accessible approach to the real-time strategy aspects. Now, I'm no RTS expert, as should be painfully obvious by now, but I know what I hate, and I don't hate Dawn of War II. In fact, I found myself enjoying it quite a bit. The game integrates some role-playing aspects in that characters level up and can be outfitted with fancier equipment and assigned skill points. Most of the strategy of the game seems to revolve around smart use of cover — conveniently indicated by green, yellow and white onscreen icons — and strategic use of the various squads' special abilities. For example, one squad can cloak, another can break suppressive fire, and one can go all Conan the Barbarian and charge headlong into throngs of evil alien Ogres with his wicked chainsaw sword. As the squads level up, they gain new abilities, thus introducing lots of new strategic variables into the action.

In a refreshing break from most other recent demos I've played, the Dawn of War II demo is actually pretty lengthy. I definitely feel like I got a good feel for the game. I still got stuck paying more attention to menus than the onscreen action (something which I attribute in part to my total lack of RTS skills), and I still missed the tactile thrill of squad-based first-person shooters, but the Dawn of War II demo did exactly what a good demo should do: it convinced me to buy the game. It's deep, fast-paced, exciting, well-presented and accessible to RTS n00bs like me. And, most importantly, it has chainsaw swords. 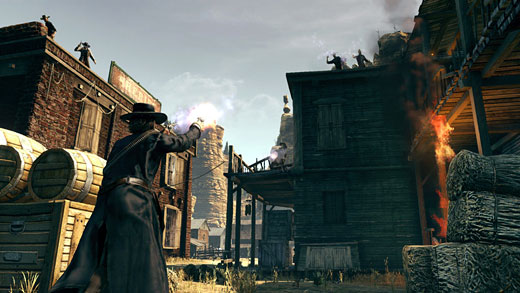 Call of Juarez: Bound in Blood

I don't care what anybody says, I liked the original Call of Juarez. It wasn't a groundbreaking game, but it certainly did the old-West shooter thing better than it had ever been done before. I enjoyed the alternating gameplay styles of Reverend Ray and Billy, and the presentation was excellent all around.

The sequel, apparently buckling under the criticism of the first game, appears to have taken away most of the gameplay that I enjoyed about the first game. Bound in Blood is a prequel where we see a young Reverend Ray finding some excuse to mow down armies of similar-looking Wild-West stereotypes. After tromping through some very unexciting scripted sequences and some very cliche shooting (albeit with a pretty interesting, if not awesome, dynamic cover system), I realized that this is one of those cases in which a developer had to curb ambition in order to get the game onto shelves. The first game, for all its flaws, was a heck of a lot more interesting. This game seems like the interior of a wealthy home on one of those rich-folks'-homes tours: polished to the point of being completely dull.

The graphics have also taken a step back. The engine looks completely different and while the lighting appears to be somewhat enhanced, the overall look is not as sharp as the previous game. Texture and shadow resolutions are lower, foliage isn't as dense (and can't be adjusted), and the HDR lighting isn't as striking. The original was designed for PC first, then ported to consoles the following year; this game was a simultaneous release, and it appears to have suffered accordingly. 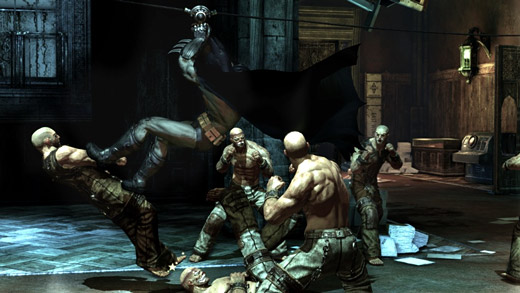 If there's ever been a game that's guilty of marketing oversaturation, Batman: Arkham Asylum would be a strong candidate for king of the hill. I can't throw a rock at the internet without hitting a video preview showing off Batman's cool gadgets, his ninja skillz, or the freakishly steroid-enhanced killers who for some reason think Batman is lame and should die. But it's probably because, unlike the overwhelming majority of comic book licensed games, Arkham looks like it actually might not be terrible. In fact, it actually looks like it will be pretty rockin', like Splinter Cell without all that pesky realism.

But if this game is going to be any good, this alarmingly short demo sure didn't give me much to go on. The download weighed in at nearly 1.6GB, and I was through the demo in maybe twenty minutes. Compare that to the three or four hours I've put into the aforementioned Dawn of War II demo, and Arkham starts to seem pretty anemic.  The demo introduces the combat system, which mostly consists of tapping one of two buttons and then watching Batman kill fifty guys. Okay, it's not quite that extreme, but the combat, while fluid, did seem suspiciously easy and simplistic. Whether it's fleshed out more over the course of the game, well, I don't know. It's a twenty minute demo for crying out loud.

After being shown how this bizarrely overmuscled rendering of Batman can dispatch of bizarrely overmuscled hired goons with his elite fisticuffs, we are introduced to the stealth elements of the game. Fisticuffs might be enough for some of the goons, but some of them have appropriately large guns, and although Batman looks like he could deflect bullets with his sculpted pecs, that apparently is not the case. Instead, players zip around on conveniently placed gargoyles and quietly rein hell on unsuspecting bodybuilders hired goons, Sam Fisher style. This aspect turned out to be by far the most enjoyable part of the demo, but it was too short to make me think that old Sam might have some competition. Not only that, but the conveniently placed gargoyles seemed a little too contrived. Hopefully there will be some other conveniently placed statues for Batman to perch upon in the final game.

I'm optimistic about the game, but the demo needed to be about twice as long. I'll be taking a wait-and-see approach, and possibly snatching this one from the bargain bins unless critical consensus informs me that to avoid playing the final game is to deprive myself of steroid-enhanced gaming bliss. Excelsior! Or something.

COJ:BiB I dunno so far I am unimpressed I really dug the gameplay in COJ but Bib seems like just another shooter…is it me or dose better story=worse game play…. Then again I can almost say the same for the bigger the budget the worse…er the game….Cryostaisis is awesome for what it is…Bioshock is lackluster for what it is….