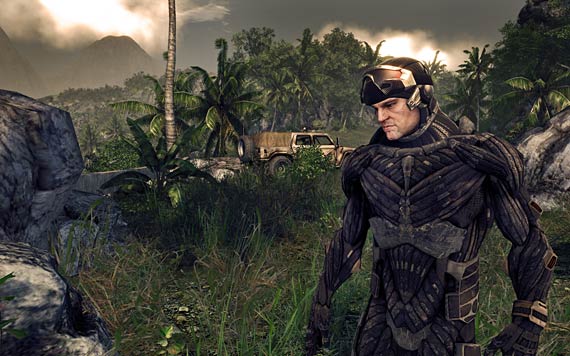 HIGH Combating scores of aliens while being pursued by nanosuited KPA soldiers through dense, frozen jungles.

LOW Realizing it has to come to an end.

Crysis was, to many, a brilliant game. It really nailed the open-ended, player-centric combat experience in a way that no shooter had yet achieved. It was a thinking man's shooter, a game that rewarded players not for slogging through a series of predictable scripted events, but for exploring and experimenting with ample weaponry and interactive environments to conquer intelligent and often unpredictable foes. To others, Crysis was an exercise in frustration. The advanced graphics engine was perhaps the single greatest selling point of the game prior to its release, but gamers quickly discovered that even the most robust systems had difficulty playing the game at its eye-popping maximum settings. Crysis was ahead of its time, figuratively and literally.

Now, a year later, the franchise has returned with Crysis Warhead. Warhead is not a sequel but rather an expansion, a game that recounts the story of Sargent Michael "Psycho" Sykes, in events that run parallel with and tie into the first game. In Warhead, Sykes is in pursuit of a mysterious weapon being transported across the country by the KPA, and he'll battle through icy wastelands, dense jungles and underground labyrinths to capture it. While Nomad-the original's protagonist-was measured and predictable, Sykes is brash and reckless, heavy on firepower and doing whatever it takes to finish the job. Yet he also shows an unwavering commitment to his comrades, defying direct orders to rescue a downed pilot and nearly losing his life and his mission to save another. It was hard to know what to expect with Warhead, because creative mastermind Cevat Yerli had said that the game was going to feature more scripting (leading some to speculate that it would have more in common with the Call of Duty series than the original), but also that he and his team at Crytek had listened to the criticism and were planning to emphasize the non-linear gameplay of the original. Well, which was it going to be?

The answer is unequivocally both. Warhead is both less linear and more scripted than Crysis, combining the best elements of the Call of Duty archetype and melding them seamlessly with the dynamic gameplay that made Crysis such a standout shooter. Not only is it a dramatic improvement over the already impressive original, but it stands as a beacon of progress to the glut of first-person shooters stuck in their rigidly scripted ruts, showing that open-ended gameplay and carefully scripted dramatic tension need not be mutually exclusive. As before, the highly interactive environments and cunning artificial intelligence of the enemies combine with the broad palette of weapons and abilities to create near-endless ways to experience the game. Warhead rewards players for their creativity, not their memorization skills. 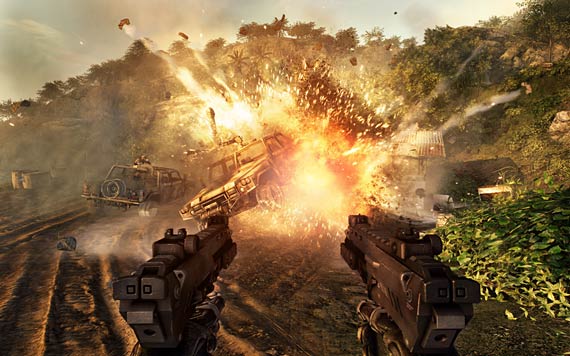 As if to reflect Sykes' adrenaline-pumped personality, Warhead is a tour-de-force of big set pieces and dramatic action. One level finds Sykes crawling out of a frozen ship to confront a squad of nanosuited KPA soldiers, then thrust into a tense hovercraft chase across massive frozen ocean waves. But despite such scripting, the game does not lose its player-centric focus. One of the later levels involves a train plowing through the jungle with the aforementioned precious cargo. In nearly any other game, this would be a restrictive, on-rails sequence (pardon the pun). But in Warhead, players are free to disembark from the train at any time and progress through the expansive surrounding jungle in whatever creative ways they so desire. There are tons of vehicles scattered about the levels and a number of scripted sequences involving them, but they are always optional. Some concessions in logic have been made to accommodate player freedom-for example, the aforementioned train comes to a stop at certain points until the player catches up, and in another sequence an escaping vehicle seems to attract enemy fire only when Sykes is manning the gun. But save for some minor concessions in believability, Crytek have expertly capitalized on the dramatic flair that characterized the final levels of the original game, yet retained the sprawling, complex levels that allow players plenty of freedom to get creative with the various weapons and nanosuit abilities at their disposal.

Sykes packs a fair bit more firepower than Nomad did, carrying more ammunition, a nice variety of new explosives, and some killer new weaponry that I shall not spoil here. He'll need it, too: enemies are packed much more densely than they were in Crysis, and they do a much better job of reacting, planning, and coordinating their attacks. Significant improvements have been made to the alien AI in addition to introducing a number of new otherworldly foes, making them much more imposing adversaries than they were last time around. Moreover, KPA soldiers are often entangled with the aliens as well, making for some dramatic full-scale battle sequences that are as tactically challenging as they are grand in scope.

Crytek also aimed to address many of the criticisms that Crysis was unreasonably system-intensive; even the highest-end rigs couldn't play the game at maximum detail. Crytek boasted of many optimizations to the engine for Warhead, and indeed they have delivered. Far more impressive than the performance improvement though is the dramatic increase in graphical detail. Environments are stunningly lush and vibrant, filled with weather effects, wildlife, dense and detailed foliage and It's not without its flaws. There are some bugs with textures not streaming in properly, DirectX 10- the default in Vista-is sluggish (again), and the performance drops a bit from in the ice levels. Still, Crytek's engine remains the unmatched standard in visual fidelity, even when the settings aren't cranked to the max. This isn't just a showpiece for realism, either; as before, the set pieces are large, complex, and dramatic. The icy landscapes and lush jungles are full of tasteful and creative artistic flourishes, from massive frozen battleships to schools of fish swimming through the ocean. Even the game's indoor sequences prove to be surprisingly robust, full of imposing steel and rock structures and teeming with interactive objects.

Warhead expands on the forward-thinking ideas presented in Crysis and truly takes them to the next level. The pacing is better, the action is better, the scripting is better, the enemies are better, the levels are better, and the graphics are better. The game is relatively short-I completed it in about six hours on "Delta"-but like the original, its open-ended nature lends it to virtually endless replayability. In fact, prior to Warhead's release, I still played Crysis on a regular basis. If Warhead has a weakness, it is still in its rather typical near-future science-fiction motif, which compares weakly to more compelling backdrops like S.T.A.L.K.E.R.: Clear Sky's post-apocalyptic battleground. But although its setting is a familiar archetype, its gameplay is a progressive vision that, a year after Crysis shattered boundaries with a new level of open-ended gameplay, continues to be the standard bearer for what this longstanding genre can achieve. Rating 9.5 out of 10

Disclosures: This review is based on the 1.0 version of the game

Parents: According to the ESRB, this game contains blood, strong language, violence. The game is not graphic in the sense of being gory or over-the-top; however there is some blood and it is very intense and violent with a fair bit of profanity. Though it's no worse than a R-rated action movie, it's clearly not intended for children.

Deaf & Hard of Hearing: The game does allow subtitles to be enabled for scripted dialogue, but the action relies heavily on contextual aural cues, such as enemy soldiers talking to each other, aliens whirring about, and gunfire coming from all directions.

Christ, Yahtzee isn’t even a games critic, he’s just an endorphin rush for the half-baked who think being witty counts as intellectual activity.

Crysis and Crysis Warhead is just a generic Halo {another generic average} inspired FPS. It’s just a eye candy with a nano suit gimmick. The game is just average. Yahtzee is a way WAY better game critic than you are. Play REAL awesome FPS games like Call of Duty 4 and Painkiller, Crysis is first person shooters for pussies like you.