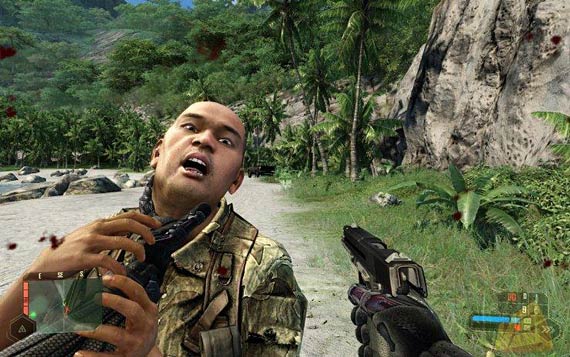 Parents should be cautious of Crysis due to its violent content and language. While the gore is not excessive, the game is undoubtedly violent and not intended for children.

PC gamers have on their hands the finest PC-exclusive since 2004, when Doom 3, Half-Life 2 and Far Cry were all released. The game is extremely demanding, and gamers expecting to play in widescreen resolutions on an older or midrange graphics card at high settings will inevitably be disappointed. This game requires at least an 8800GT to be played at high settings, and even that powerful card may not enable smooth gameplay at resolutions past 1280×1024 with settings at "high." The much-ballyhooed DirectX 10, Vista-exclusive "very high" settings are extremely demanding and unplayable for all but those with very high-end dual-card setups or those willing to play the game in extremely low resolution.

There are a number of tweaks available all over the web, including the now infamous "DX10 in XP" tweak that allows certain Vista-only "very high" features to be enabled in Windows XP, though not without similar performance demands. However it is also possible to create a game that is virtually indistinguishable from the "very high" settings by using various tweaks. These tweaks are not for everyone, but they are out there for those who wish to optimize their performance.

Shooter fans, get this game. Period. It is a masterful game that expands on the unique design on Far Cry and takes it to a whole new level. This game is well worth any necessary upgrades to your PC, especially since CryEngine2 is already being used by other developers. This will not be the last game with such demanding system requirements.

Deaf and Hard of Hearing gamers may have difficulty with the game because so much of the in-game action relies on audio cues. For example, some levels have the player being stalked by a helicopter that is difficult to see through the trees; additionally, many of the stealth sequences rely on heavily on audio cues, particularly since the player can alert the enemy soldiers by making too much noise.

In regards to the “Deaf and Hard of Hearing gamers” part, are the voices subtitled?