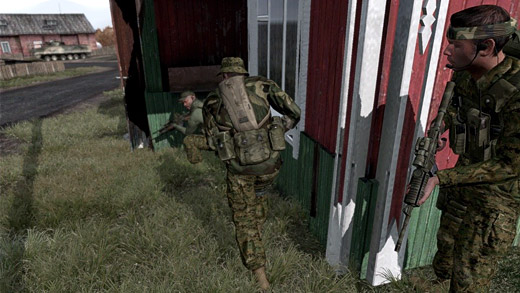 I downloaded the demo for ARMA II earlier this week, and I've spent some time dabbling with it. I never played the first one, but the concept of a realistic, broad-scoped military simulator/shooter sounded pretty neat. And, judging from the demo, it is indeed pretty neat. All it requires is a little patience. Actually, it requires mountains of patience. Despite my best efforts to really soak up the experience, the game just keeps getting in the way, and I admit, I just don't have the ambition required to get really immersed in this type of game.

The game is bafflingly complex. There are so many commands and menus that the demo should have come with a 200-page .pdf manual just to explain everything. Okay, I'm exaggerating a little, but not as much as one might think. Most games have moved on to user-friendly context-sensitive menus and/or GUIs instead of mapping every little command to a key, but ARMA II is decidedly old-school in this regard.  There's even a button to raise a weapon to eye level for using iron sights and scopes, which for some reason is separate from the button that zooms in, which can be done regardless of whether a weapon is in hand or not. Really? Oh, and that's not the worst offender—to look around while driving a jeep using the conventional WASD formation, the game requires players to hold the ALT key and then move the mouse around, even though using the mouse doesn't do anything else.

I went through the tutorial, which does a horrible job of explaining most of the game's commands. The game kept telling me to use the "action menu", but the brief message explaining what that was had flashed so briefly that I hadn't caught it before it vanished. Lo and behold, there is a key for going to the most recent hint, but by the time I found it I was already another message ahead. So I fumbled around with various keys until I figured it out. Apparently the scroll wheel is used for all kinds of things, but the game doesn't explain this very clearly at all.

By the time I got to the end of the basic training, which is a little firefight, I was completely confused by all the commands thrown at me, and I found the actual fight mechanics to be rather cumbersome. Now, I'm fine with the more "realistic" motion and so on, but I kept hearing gunshots paired with sound effects like I was being hit, but other than the sound there were no indicators. So I ran for cover, but I still seemed to be taking hits, so I went prone and crawled around until I spotted a guy, who promptly shot me in the face. Mission over. Now, I'm sure that if I wanted to, I could spend some time really getting into the unique mechanics of the game and possibly even enjoy it. But I didn't really get a sense that the reward would be there.

I'm all for complex military sims. I loved the Rainbow Six games before they turned into Halo clones.  Some of the Ghost Recon games rank among my all-time favorites. But ARMA II was just too inaccessible. It seems like there are too many times when the UI could have been dramatically simplified, when core concepts could have been explained much more clearly, and when developers could have realized that this is a videogame. I really want to like this game. I don't plan on giving up on it. But this is as far from "pick up and play" as it gets. It's more like "study, experiment, die a lot, then play." Then there's the whole issue of figuring out when there's a bug versus when you just don't know what to do, but that's a whole other beast.

Oh well. At least the graphics are nice.